Toys R Us has an exclusive deal set up with Mattel where they get repainted versions of the "All-Star" reissue DC Universe figures. So far this year we've seen Batman in black and grey deco with the large bat symbol on his chest while other retailers get the yellow oval logo. The latest of TRU's DCUC All-Star exclusives is a "modern" Green Lantern, but he ended up being an underwhelming release. However, that's always great motiviation for customizing! 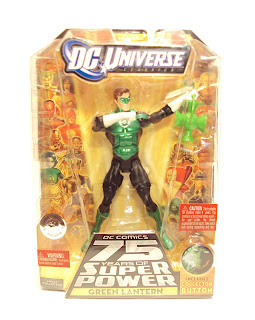 This is essentially the same sculpt from wave 3 with the only change being the shoulders (look closely and you'll figure it out). For the repaint, they followed the current costume design used in the comics and added metallic green paint this time around. He looks sharp, although I would have preferred a new head sculpt as his current hair style is shorter than this figures 'do. Also, depending on which artist draws Hal, the new costume sometimes has angled cuts on the gloves and boots instead of just being straight. That's not a big deal for me, but something they could easily have corrected was the symbol on his chest and that was my start point for the custom. 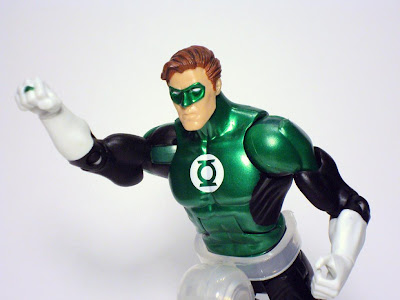 They used the same old symbol while the current symbol is angled on the "bars" of the GL symbol. Mattel even used a modern symbol on John Stewart, so I don't see why they couldn't do it on this Hal. I simply used Testors Model Master Flat White Acryl to cover up the corners and give it the angled look depicted in the current comics. It's a small mod, but I think it adds to the overall look and differentiates him from his older release (and upcoming release).

However, after sitting on it for a few days, I still wasn't pleased with this release. He just seemed to much like the old figure inspite of the changes to his costume and I couldn't really call my simple modification a custom. That's when I came up with the idea of repainting his gloves and making him more inline with his interpretation in Green Lantern: First Flight, the animated film starring Hal Jordan. Seemed easy enough, I began by painting his hands and forearms in black: 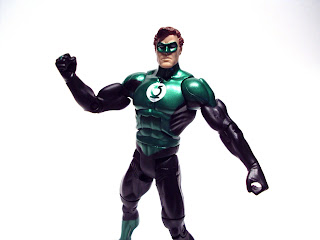 My initial approach for the metallic green forearms was to paint them in silver, then use clear green to produce the effect. However, this did not go as planned: 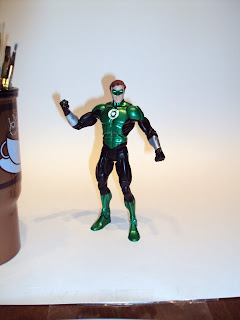 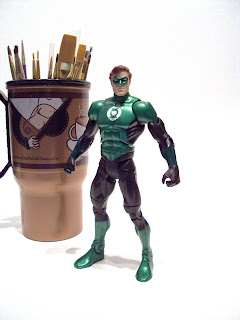 
I couldn't apply the clear green light enough for the silver to show through or dark enough to cover it sufficiently. It ended up looking horrible! First, the clear green was on too thick and it was too dark. Also, it left a glossy finish which is NOT what I wanted. I regrouped and tested out different mixtures of silver & clear green to get the desired shade. This worked much better, I only had to add a little bit of "Insignia Yellow" to achieve the correct tone and ta-da! 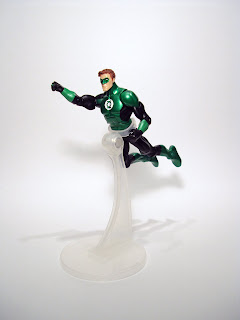 So, anyway, I ended up buying another one because I was just going to do the symbol mod and have the "modern" version also. But after finishing the First Flight figure, I didn't really see the need to have that other version, so this guy is still in package until I decide what to do with him. 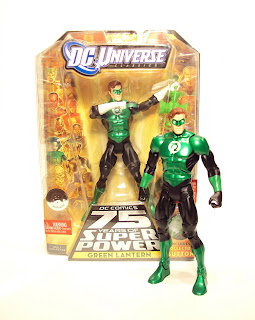