Along with the Witching Axe of Ruination I ordered from Spy Monkey Creations, I also picked up two of their "Emerald Energy" construct accessories for my various DC Universe Classics Green Lanterns. Do they have the power to stop evil and make your DCUC display pop? Let's find out... 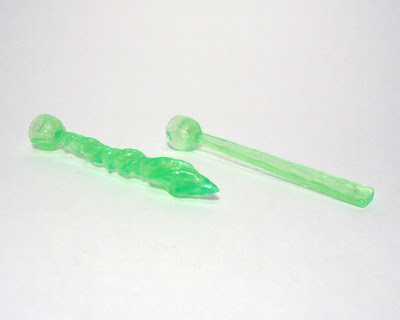 SMC currently has three items in their Emerald Energy series: spiral beam, flat beam and shield constructs. These are meant to compliment Green Lantern action figures (at least the male characters) from the DCUC line, since Mattel doesn't pack too many accessories with the figures. I purchased the Spiral and Flat beams a couple of weeks ago when I ordered the Witching Axe for Faker. I wasn't too into the shield since Katma Tui includes one and it's sort of a lame accessory, so I skipped on the SMC version. But I was very excited about the possibilities for the beams. The Spiral beam interested me the most, but I picked up the Flat beam, too, because I wanted to try them both out and have a different accessory to use. 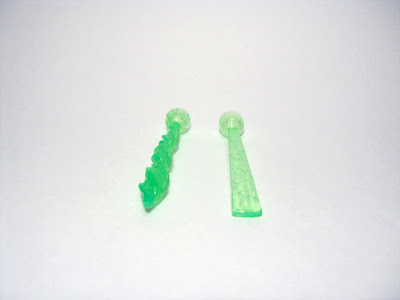 Both beams are molded in a translucent green resin that effectively captures a Green Lantern's power blast in three dimensional form. They're about 3 1/2 inches long and both feature a similar dome that locks in place with the use of two notches that lock into the the sides of the figure's fist. The dome on each piece features sculpting recreating a burst of energy from a GL's ring while the length of each beam widens as it gets closer to the tip. 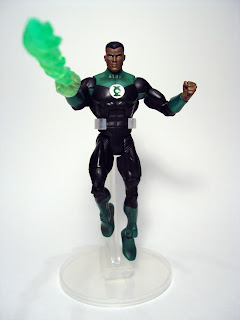 The Spiral beam features a swirling green "flame" that ends in a point. It looks particularly menacing, almost like a drill bit shooting out at it's target, but with enough detail to not have a smooth surface. Ideally resembling a crackling energy beam straight out of the comics. 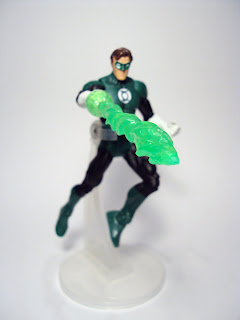 The Flat beam features a ton of detail, also, and I'm glad because they could have literally just created a flat piece of plastic. The details run the length of the beam, creating an almost fluid look to it that still looks like a powerful blast of green willpower focused through a Lantern's ring. I ended up liking this one a lot, especially on Abin Sur. Both fit quite well on all three (five if you count the various versions of Hal) of my Green Lanterns: Hal Jordan, John Stewart and Abin Sur, however the flat beam doesn't stay as straight on John's fist as it does on the others. Loose arm joints would be a problem for these, but not any more than using Stewart's constructs. 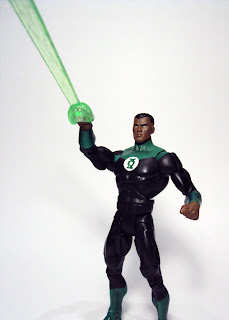 Speaking of which, you're probably wondering how they stack up with Mattel's emerald energy accessories... Pretty well actually! SMC's are lighter, mainly the Flat beam as it is thinner than the spiral beam, but in a Green Lantern group shot with other constructs, these fit right in. 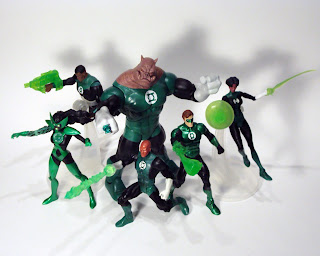 These are only available via Spy Monkey's online store and each sell for $6 plus shipping. Their shipping fees aren't bad at all, I paid $4 to ship the two beams and the Witching Axe. Like most online stores, ordering more than one helps divide the shipping cost among the items and softens the blow. In my case, each of these ended up costing $7.33. You may think that's a bit high for one accessory, but these are hand-made, look fantastic on your Green Lantern figures and provide something that is grievously lacking in the DCUC line: useful accessories! I'm very pleased with these and highly recommend them to any GL fan who wants to spruce up their display. I'm definitely ordering the shield next time around. My only question for SMC is: when are you going to make YELLOW energy constructs? 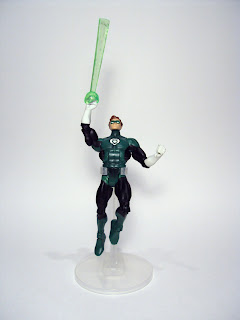 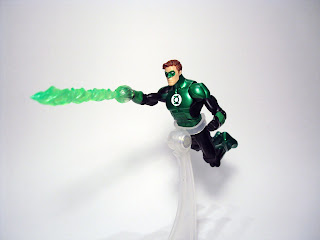 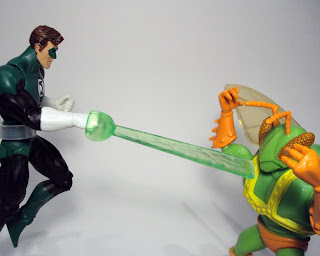