When there's something strange in your neighborhood, who you gonna call?... The police, that's right, but if your dealing with paranormal activity, you'd be better served by the Ghostbusters! The latest release in Mattel's revival of the beloved 1980's franchise is none other than the GB'ers mouthpiece, Dr. Peter Venkman! 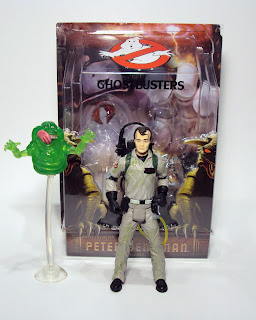 Dr. Venkman was masterfully portrayed by Bill Murray in both the 1984 classic, Ghostbusters and it's 1989 sequel, Ghostbusters 2. Peter marks the 5th release in the 6" line since it debuted at San Diego Comic Con in 2009 with the debut of "slimed" Egon Spengler. Initially, Mattel's plan was to release one GB figure every two months, starting with Ray Stantz in October, then Winston in December. Unfortunately, 2010 didn't see a busters release until May with Walter Peck. Venkman comes six months after the last GB team member release and that didn't sit well with many fans, but he did manage to sell out in about a day, so I hope this only proves to Mattel that they need to start pushing these guys out a lot faster. 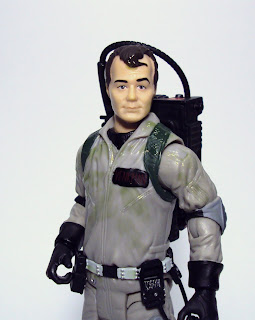 The newly released figure was sculpted by The Four Horsemen and captures Venkman after the GBers' first encounter with everyone's favorite apparition, Slimer. The figure is glazed with a thick, clear green fluid to recreate the slime residue left by Slimer's attack. I'd say the figure itself is 75% reuse from the previous GB'er releases. First the new stuff: Peter, of course, gets a new head with a cartoony likeness to Bill Murray, which is a lot better than the sculpt on Ray's or Egon's figures (not Winston's, though). He has new forearms, hands and lower legs and the folded gloves are omitted from his belt as this figure is now gloved as he should be for the scene he was based on. In fact, I think all of the figures should feature gloved hands, but there are several scenes where the guys appeared without gloves. However, in most of those scenes they are not wearing the proton packs, either, and the packs on the figures are not removeable. The sculpting on Pete's gloves is great and recreates the thick rubber look of the gloves the boys wear in the films perfectly. 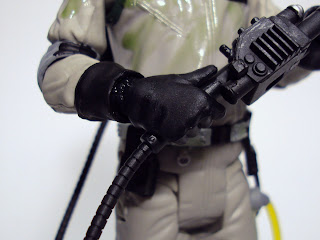 The rest of the body has great detail on it with all sorts of seams, zippers and buttons across his uniform. The work on his elbow pads is great, recreating them with right amount of padding, just like the shoulder straps. The Proton Pack's shoulder straps are sculpted onto Peter's torso, while the pack itself is a separate piece that is later glued on his back. The detailing on the pack is magnificent, capturing several small details and adding separate pieces for various wires and cables. The neutron wand is a separate piece connected via a flexible hose and can be plugged onto the pack using a small peg on the pack that inserts into the wand. The wand also has great sculpting, if only it were made of a firmer plastic because the long end is flimsy and difficult to get into Venkman's left hand. 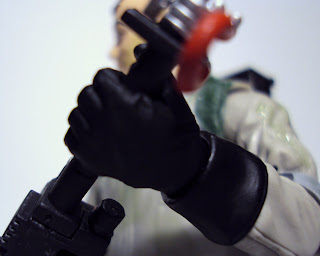 Taking a look at Pete's belt, the 4H added nice detail to his belt, with a walkie-talkie over his right hip, some other pieces connected to each other by a wire (I have no idea what they are) over his left hip and that mysterious tube that plugs into his left leg. 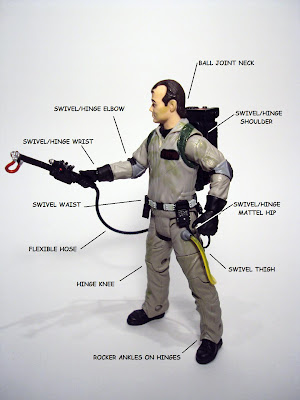 Mattel has introduced several new articulation points with the Ghostbusters line. Not all of them work well and leave the figure lacking in a couple of ways. The head and neck are one piece, moving on what I believe is a ball joint in the chest. Shoulders are standard swivel/hinge joints, however they bypassed a bicep swivel by using a swivel/hinge at the elbow, much like Hasbro's last few Marvel Legends figures. This joint causes the elbow to appear painfully dislocated when the arm is straightened, but when you consider he's wearing elbowpads, it would be difficult to keep your arm straight in real life. The wrist joints work well and are very helpful in getting both hands to hold the wand. I'm sure that because of the proton pack being welded to his back, they decided not to include an ab crunch. Not a big deal as these guys aren't known for the flexibility, but it sure would make achieving different poses a lot easier. The hip joints are very similar to what Mattel uses on DCUC, however, here they are significantly limited by the items hanging on his belt. Thigh swivels have great 360 degree motion, and the hinged knees work perfectly. Pete might have his untucked pant legs, but the sacrifice for this is no calf swivel like the other Ghostbusters. I don't think a cut here would break up the sculpt as it would be the same as the thigh cut, but it seems Matty didn't want to produce four pieces when they could just tool two new lower leg sections. The untucked pants limit the range of the ankle hinge, but manage not to impede the rocker motion too much. 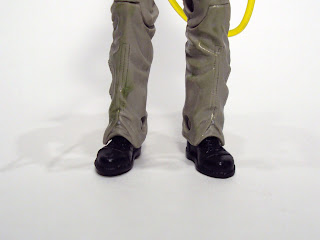 In the paint department, Peter's head is molded in his flesh tone, then hair, eyebrows and eyes are painted in the necessary colors. There's no airbrushing on his face, but he does have a slightly darker tone on his lips. His eyes are a very pale blue, and get a thin line of pink on the lower lid to add definition to them. His body is molded in the color of his uniform with black added on his ghostbusting equipment and belt. The zippers across his uniform are painted in silver and look great for such a small detail. The t-shirt under his uniform is painted black like the front sections of his elbowpads and the glove sections of his forearms, but his gloved hands and boots are molded in the color. 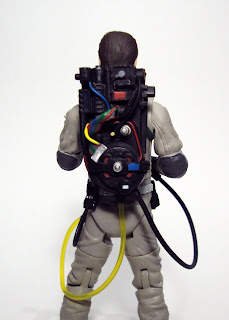 The proton pack, hose and wand were molded in black and later painted with several different colors to bring out the details like wiring and light-up sections. They also added some silver paint to create a scratched metal appearance at various points across the pack and wand. The GB logo tampo on his right shoulder is sharp just like the "VENKMAN" on his name tag. Like I mentioned previously, there's a thick "slime" added across Venkman's body. It's not overdone, it's just enough to make him look "slimed" without making him looked soaked. 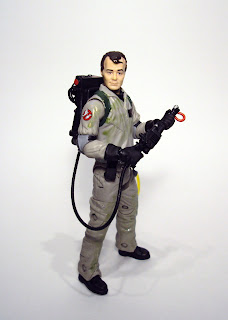 Peter comes packaged with a new Slimer figure and a stand for the green ghoul. Slimer is molded in transparent green and, as far as I can tell, his "body" is made of two parts that are glued together. Unlike the Slimer included with the SDCC Egon, this one has his tongue sticking out, licking his upper "lip", probably eyeing that food cart at the Hotel Sedgewick. The articulation on Slimer is pretty good, his arms can't go straight up because the hinges are obstructed by the fat layers molded over the shoulders, but the swivels rotate in a full circle. He can achieve a full 90 degree bend at the elbows and the swivels on his wrists go all the way around. Also, he can turn 360 on the stand as there is nothing to restrict that movement, although, you can always just turn the stand anyway. 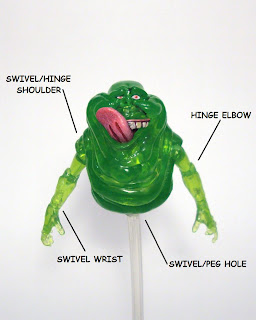 Slimer's a heavy figure, too! I'd say he weighs about the same as Pete, so balancing him on his stand can be a bit tricky and you have to play with the stand a bit. The base of the stand also rotates 360 degrees and that helps because you have to find the "sweet spot" to get Slimer on it. 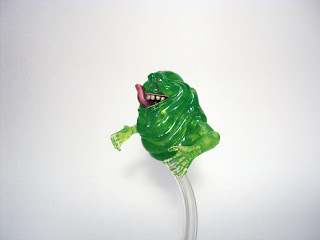 Mattel's Ghostbusters line is exclusive to Matty Collector, meaning it can be a pain in the ass to purchase. Luckily, these don't seem to be as popular as the Masters of the Universe Classics line, usually being available for a day (or several, looking at you Peck!) after they go on sale. Like all the GB figures, Peter was $20 on the site, plus tax and shipping. I purchased mine along with the MotUC Faker reissue, the cost per figure was $25.75 in one shipment. That's a lot for a figure, collector or not. Is a Peter Venkman figure worth that much? I'll have to say "YES!". Peter was and still is my favorite Ghostbusters character and in many ways, I've waited for a Bill Murray-version of the character in action figure form for over twenty years. Now I have him, albeit slimed, but still. I understand that may not make a difference to many casual fans, or collectors, but it was missing piece of toy history for me. All I need now, is an Egon figure and I'll have the complete team. Let's hope I don't have to wait another six months... 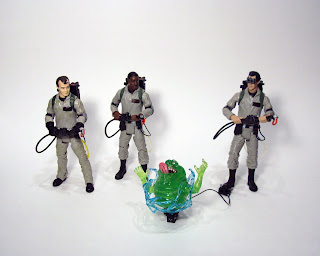 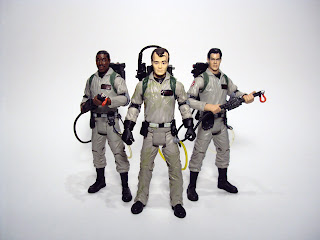