Iron Man 2 rocketed into theaters in May and kicked off the summer movie season. I wasn't able to watch the film until last week, but I picked up this figure and War Machine (to be reviewed later) two weeks ago. Let's see what he's made of. 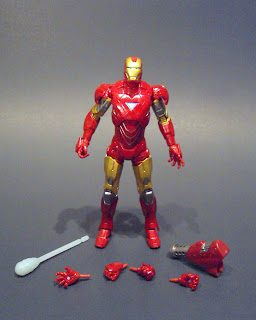 Iron Man here comes straight from the blockbuster hit Iron Man 2, starring Robert Downey, Jr., Don Cheadle and Jules Winnfield from Pulp Fiction (although now bald and missing an eye). This figure is based on Tony Stark's 6th version of the Iron Man armor, now with a triangular ARC reactor and super kick-ass weapons upgrade! The sculpting is phenomenal for a movie tie-in figure. Sharp details all over, including the helmet, making it incredibly accurate to the film version. He's packaged with three pairs of hands (two fists, two "pistol-gripping" hands and two repulsor blast hands), a missile launcher and projectile. The missile launcher is similar to the ones used with the first films movie figures and made to snap on to his wrist. It's pretty much a throwaway for me, but I'll keep it because "you never know...". Unlike many previous Iron Man figures from the Marvel Legends lines or the movie line, this one does not have a removeable faceplate or alternate Tony Stark head. Kind of a bummer as that was a pretty cool feature on older figures. 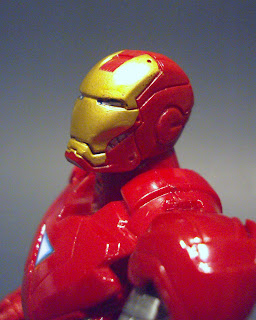 I'm mostly happy with the paint except the applications on his upper legs. It seems they painted him in gold first, then added red on the upper part of the thighs. The application was sloppy and you can see the brush strokes smeared over the gold. I'm guessing they were in a hurry to get these done. I did inspect the figures on the shelf carefully before purchasing and this one had the best paint (obviously, I couldn't see the back side while he was in the package). 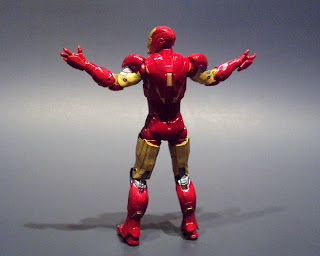 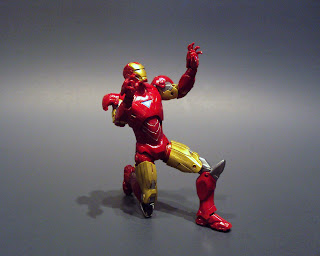 All in all, I'm happy I found him and War Machine at my local Walmart and even happier that I picked them up when I did (they were all gone within a week). Watching the movie a week later added to the enjoyment of the figures as I liked the movie, too. It's nice to see Hasbro hasn't given up on the 6" scale and is willing to make awesome figures, I hope this carries into more Marvel Legends figures. My review for War Machine will be coming up soon. 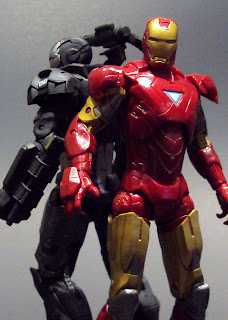