Have you ever purchased an exclusive $20 action figure from an online retailer/manufacturer that makes purchasing said figure a torment beyond reason, then been upset after receiving that figure because it's sorely lacking in the accessory department? Ever wish there was someway to obtain additional accessories that weren't exactly like what all the other figures in the line have, but would still fit the character perfectly? Well, it looks like someone has granted your wish... 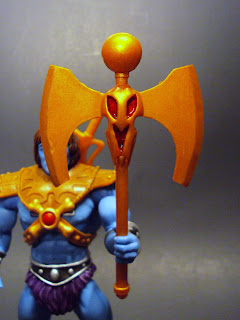 Spy Monkey Creations, or SMC, is an online retailer that produces action figure accessories to "enchance your collection." Although they won't mention it by name, their focus is mainly on weapons for the Masters of the Universe Classics line and more recently has expanded to DC Universe Classics. These accessories, based on their own designs, are cast in resin and then painted by hand. The "Doppelganger" version of the Witching Axe of Ruination is designed to complement Eternia's favorite blue skinned robot imposter, Faker. 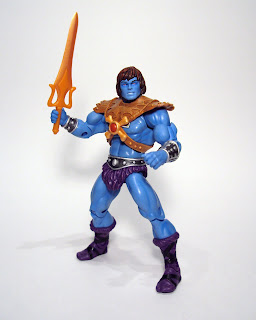 I purchased Faker from Matty Collector during this month's sale and knowing that, aside from his removable armor, he only includes an orange version of He-Man's power sword, I ordered the Doppelganger Axe from Spy Monkey the same day (along with a couple of other items to be reviewed later). I received the package the following Monday, just a couple of days before Faker arrived, so I had some time to look over the axe. My initial thought was that it was too big, no way it would look good with any MotUC figures, let alone Faker. I compared it to the line's official battle axe and the repainted version from the Weapons Pak: 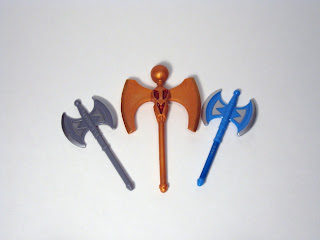 I put it in He-Man's hand for comparison: 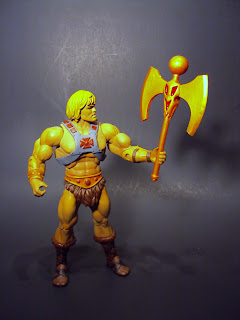 I was convinced it was absurdly large.Then Faker arrived and I was very excited to open him up and mess around with him. I remember the vintage toy and thought he had a cool dynamic: a He-Man imposter meant to replace the hero, yet his skin was blue. After getting reacquainted with Faker, I was quite happy with the Classics version and couldn't wait to see how the Witching Axe looked in his hands. I placed the weapon in his left hand and something magical happened... He looked totally badass! 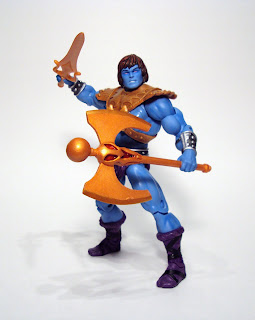 The axe consists of one molded piece with identical faces containing a stylized skull with indentations making up the "eyes" and "nose." The handle has a knob at the end similar to the one on Mattel's ax. The shaft is slightly thicker than the one on He-Man's, but not much more difficult to place in Faker's hand. 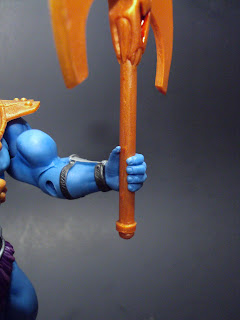 It ends at a larger sphere above the sculpted skull. The skull also features small teeth that go around the shaft, with larger ones on the sides filling in the space between the skulls. The blades are symmetrical, coming to a sharp edge throughout the length of both. There are a few rough spots on my axe, one of the blades has an indentation about halfway down and a bit of mold flash at a few points, but nothing major. The overall sculpt is very wicked and fits in perfectly as an evil character's weapon of choice. Your imagination can run wild looking at this piece. The skull design projects the image of it belonging to some slaughtered Eternian creature, while the orb at the top conjures up images of occult powers being summoned from beyond. 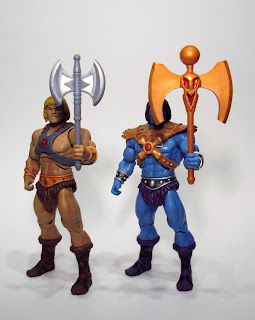 The axe seems to be cast in a light orange resin, later painted a darker, pearlized shade across the entire piece. A metallic, goldish-orange is added on the edges of the blades, mimicking the two-tone scheme of Matty's ax. The crevices in the skull are painted with a glossy red that looks like fresh blood pooled in the cavities. The colors match up quite well with Faker's sword, although the orange on the sword's hilt is flat. More importantly, both weapons look good when held by Faker at the same time. The color also lends itself nicely to Beast Man: 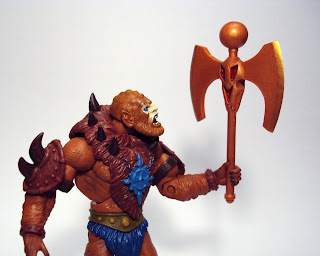 At present all of the MotUC-compatible weapons and accessories in SMC's Fantasy series are listed at $10 each. The lowest shipping rate is $4, bringing your total to $14 if you're just ordering the one item. That's steep for one weapon accessory, but the quality is pretty solid and the design works effectively with the targeted line. Also, it's not just a repaint of the same ax Mattel keeps sending out. I think we get enough of that already with all the power swords, so some variety helps keep your display fresh. I ordered this one along with the Emerald Energy: Spiral & Flat beams and everything shipped for $4. That divides the shipping cost up some, so it's not as bad of a hit. While I haven't tested out any of their other Fantasy weapons, I would recommend this one to any collector who wants to expand the MotUC arsenal and throw in some exotic flavors, especially for the Blue-hued Baddie. I was already diggin' Faker, but adding the Witching Axe made him so much better and believe it or not, he's become my favorite figure in the line now. 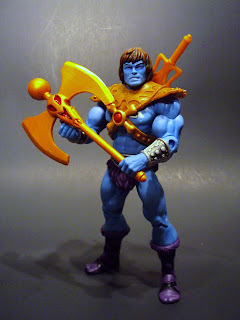 I don't know how many "casual" Masters of the Universe fans are collecting the Classics line, but obviously it's a line aimed at collector's and that carries a hefty price tag on it's own. I can't recommend this accessory for every fan, but those that are really into the line will be happy with one of these. 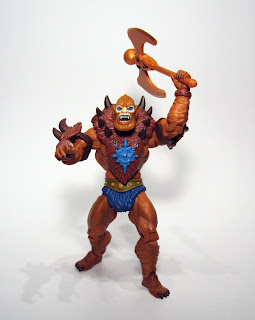 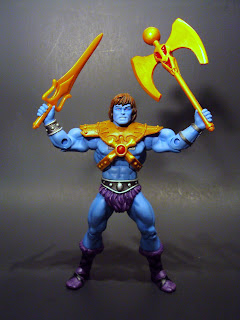