Today we're taking a look at a breakout star from the hit movie Toy Story 3 who may not be an "Adult Collector", but may interest you either way. Let's find out what all the buzz is about... 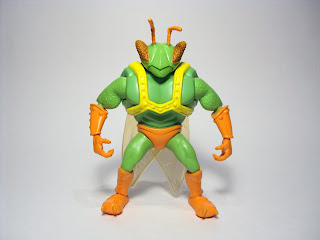 I haven't seen Toy Story 3, yet, although it's been at the top of the box office for the past couple of weeks and received great reviews from both critics and fans alike. One of the more interesting new characters is Twitch, an insect-like warrior very similar to something out of the Masters of the Universe. The action figure version's been featured heavily in numerous comics by googum over at Articulated Discussion. I believe Twitch is referred to as being an "insectaloid warrior" in the movie and I assume that's a toyline in the Toy Story universe. I scored mine at Walmart, where he was on-sale for $6 just a few weeks ago. 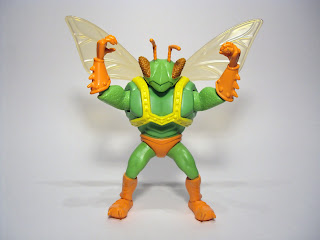 I'm not sure what insect, if any, he's meant to resemble, but he reminds me of a Praying Mantis, with the horizontal mandible sculpt and the large oval eyes, but may be a grasshopper-man [okay, quick search on Wikipedia, he's definitely a Praying Mantis, or Man-Tis, :)]. Everything you see on Twitch is sculpted on except for his wings, but there is a lot of cool details across his entire body. His antennas have ridges on them, his eyes have little bumps all over, there's a "rocky" texture on his arms and his arm and leg armor has various layers sculpted on. His harness has riveting sculpted on all the way around, but curiously does not close up in the back. The wings are two separate pieces connected on his upper back. They're molded in a transparent plastic, but have veiny details on them like a real insects wings. 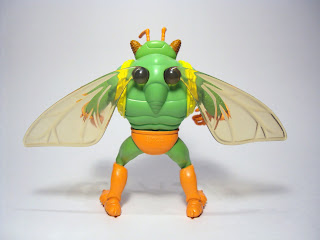 Twitch is primarily molded in a lime green plastic, then painted with orange and yellow for his "clothing" and other details. As this isn't an action figure targeted at collectors, at least not the ones that would spend $15+ on action figures (hence his $8, kid-friendly, price tag) the paint does little to embellish the sculpt. It's kind of lacking in certain spots like the top edges of his trunks and arm guards where the green plastic shows through the orange. Mattel gave Twitch seven points of articulation, which you can see in the diagram above. The side-to-side motion of his head is limited by his harness. His arms and wings are similarly restricted by the torso sculpt. His legs are the only points that freely rotate 360 degrees.
Unfortunately, Mattel did not include any accessories for Twitch, inspite of him being depicted with a magical staff in several images and I believe in the film, not to mention the very package he came in. That seems like a huge omission, considering both his hands are sculpted open and could easily hold something.
With all the various characters in the Toy Story world, Mattel has a unique challenge in recreating them in toy form as none of the characters are from the same toylines in the movie. Well, Ken and Barbie, obviously, but Buzz, Woody, Potato-head and the slinky dog are from different lines. That said, I find it pretty interesting that they added so many details to Twitch's sculpt, it's just too bad the paint and articulation are so limited, otherwise Twitch would be a really cool figure. I'll blame googum's "Bastards of the Universe" comic for enticing me into buying this guy along with my own comic-related ideas for him (hope to have that up soon). But at six bucks, I don't think he's all that bad and actually looks in scale with the vintage MotU line. He's actually a great figure to terrorize your dog or other small, domesticated animal with. Our Dachsund runs away in fear of the bright green bug man (especially when I chase her with him, while making buzzing sounds). 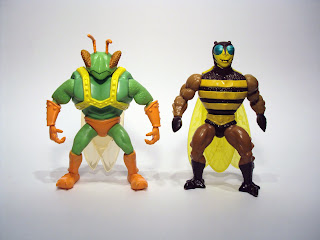 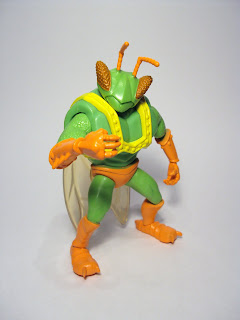 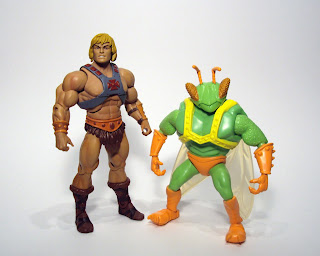