Mattel is kicking ass with their new WWE products. I've been collecting the Elite line since it debuted in January and today I'm taking a look at my third Elite purchase and one of my new favorite wrestlers, the Second City Saint, CM Punk! 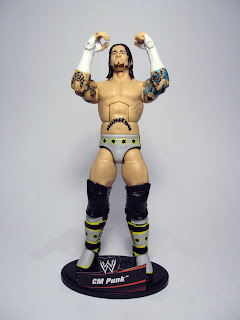 CM Punk debuted in the WWE within the last 4 or 5 years, a time during which I stopped following pro-wrestling. The first true contact I had with Punk is when I saw his Elite figure on the shelf at my local Walmart. I wanted to know what was up with this funky looking dude, both arms covered in tattoos and a "whatever" type attitude. Incidentally, I also ordered "Smackdown! vs RAW 2010" for Xbox around January and was introduced to a new generation of wrestlers. I did some research (you know, wikipedia'd) CM and learned a lot of interesting facts about him. Chief among them is Punk's "straight edge" lifestyle, which means he doesn't consume alcohol or drugs, not even cigarettes. 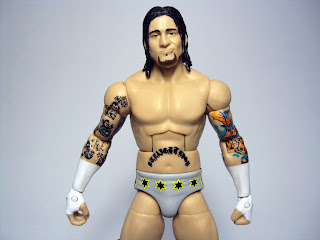 This figure is from the first wave of WWE Elite Collection action figures. He's digitally sculpted from 3D scans of the wrestler himself and cast primarily in his skin tone, then painted were necessary. The detail on the head is great, even adding his lip ring and wiry hair. Punk's captured here with a smirk, a trademark look for the Superstar although I'd prefer a serious expression (custom time, stay tuned!) or something that looks ready to kick-ass. Punk's not the biggest and has leaner body than a lot of the bulked up monsters you see on WWE programming. The figure reflects that by using the slimmer, less toned buck. His left hand was sculpted into a fist as opposed to his right which has an open grip so he can hold a weapon, etc., although I'd prefer he have two fists as it captures his persona much better. 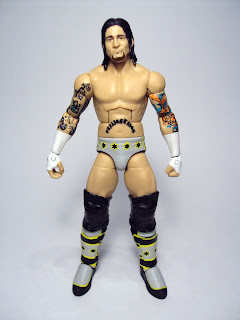 He has padded boots that connect to a lower leg piece with padding sculpted on to recreate his knee-high look. His kneepads are separate pieces like all of Mattel's wrestlers, but figures that have the "knee-high" boots/pads combo (i.e. Chris Jericho, The current Miz, Shelton Benjamin) get the larger pads, however, it isn't always accurate or the best solution. Some of the smaller pads don't cover as much of the legs like the pads the Superstars wear, but I think Mattel could have used a combo of smaller pads and paint to better effect.

The problem with the larger pads is they impede a lot of the articulation in the legs at the knees. That's a shame since Elite figures have double hinged knees with a really great range. Aside from that Punk has the complete Elite articulation model: ball-joint head, swivels at the biceps, waist, thighs and boots, a combination of swivels and hinges for the shoulders, wrists, and legs. His elbows are plain hinges, but the ankles rock along with being hinged and he has an ab crunch. I would prefer they add double-hinged elbows because it would make a lot of wrestling poses much more effective. 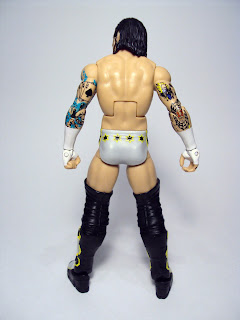 Punk gets full-color tattoos on both his arms with the only tats omitted being the Pepsi and Cobra logos he has on his shoulders. Obviously, they aren't added because of trademark infringement or whatever and you don't see them in the videogame either. He even has the letters "D-R-U-G" and "F-R-E-E" stamped on each of the fingers of his right and left hands, respectively. The apps here, just like all the tattoos, are clean and sharp. Also, "STRAIGHT EDGE" is stamped on his abdomen in Old English lettering, just like the real Punk's. I think Mattel really went above and beyond with the tattoos on the Elite figures, some of the detailing is just awe-inspiring for this scale. That makes up for the fact that his wrist tape is simply painted on in plain white. There is nothing to simulate the look of wrapped athletic tape. If the Entrance Greats Triple H looks to be wearing a cut-up sock on his right hand, then CM is wearing two! The other paint apps are on his trunks and boots all of which look clean and accurate. 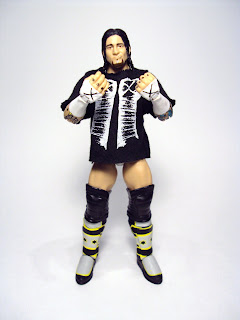 Unfortunately, his only accessory, aside from the standard stand & name tag, is a t-shirt with his double fist logo. It's made of cloth with a velcro strip along the back for easy removing. I'm glad they add these in because the add a great level of authenticity to the figures. Punk's shirt is a little too big for him, I assume they make the shirts in one size and just add the individual logos for the character, but he and several others would benefit from a snug fit. Wrestlers usually don't come out wearing baggy t-shirts, especially when they're fit and want to display their build to the audience. They could have added something else to the package, Punk's known for coming out with a microphone and talking trash to the audience as he is the "Straight Edge Messiah." I guess he can hold the shirt with his "kung fu grip" when he's not wearing it...

Here is a side-by-side of the Basic & Elite CM Punks: 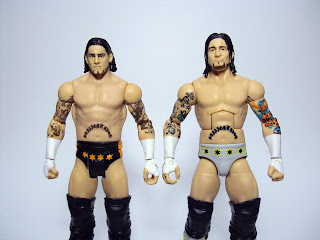 At $15, the Elites are priced like the rest of Mattel's collector lines (at least the ones at retail). If you go online you'll probably pay a bit more for these, especially at the online specialty stores. The price isn't horrible when you consider this is a 7" scale figure, digitally sculpted from 3D scans of the Superstar, features full-color and highly-detailed tattoos (unlike the Basic level figures) and graphics and includes removeable clothing. If you're a collector like me, you'll also prefer the Elites for the added articulation, although they can still add a few more crucial points. When I factor all that in, I can deal with the current price tag. A casual fan will probably be happier with the cheaper Basic figures, although the $5 savings may not seem like a huge deal compared to the features you end up losing. Ideally, these would be priced at $13, but it seems the market and production costs are keeping that from happening.