This past March marked the 26th edition of WWE's biggest pay-per-view event, WrestleMania. It also featured the last match of the Heart Break Kid, Shawn Michaels before he retired from the world of Sports Entertainment. 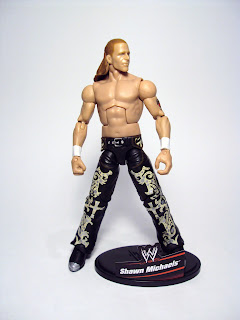 With the launch of Mattel's WWE products many fans couldn't wait to get there hands on a new Shawn Michaels figure. HBK was the show-stopper, the main-event, Mr. Pay-Per-View. He's been a part of the most legendary matches in not just WWE history, but pro-wrestling overall. And through trials and tribulations he remained a fan favorite for nearly two decades. Mattel included him in the Elite series as his retirement was not announced prior to this figure being completed and the "Legends" series wouldn't debut until this month. This series 3 HBK figure was released in May, I scored mine from Amazon.com along with Santino from the same wave.

HBK is scultped from 3D scans taken by Gentle Giant, in a process similar to the one used by former WWE figure line, Jakks Pacific . His head and hair are separate pieces that are later glued together. He gets the smaller torso with less definition than figures like Randy Orton or Triple H. His lower body is exclusive to him and considering the fact that he no longer wears wrestling tights, in favor of chaps, this presented considerable additional tooling costs for Mattel. After seeing pics on Matty's WWE Facebook page, I initially thought his lower torso just had his pants' design painted on. However, the laces and layer of the chaps is effectively sculpted on and really proves the dedication they have to creating a new collector-worthy line. The legs have appropriate wrinkles to represent his pants & chaps combo and he gets new feet to recreate his cowboy-style boots. 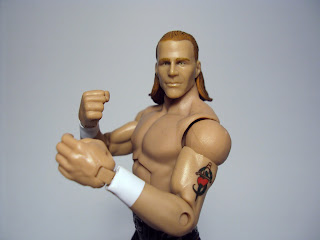 Shawn is molded in his flesh tone, like most WWE figures, and in black for his lower body. The skin tone is fine except for the lack of any shading to bring out the detail in the sculpt. That's something Mattel should really look into addressing because it does the awesome sculpting a disservice. His only tattoo, an "S" over a heart and dagger, is applied neatly and with full color like the rest of the line. His wrist wraps are painted in plain white and have no detailing to make them look like layered tape, another point of contention across the line. The work on his pants is solid, capturing the intricate details of the design work perfectly in silver and gold. They even added the "HBK" on his rear waist. 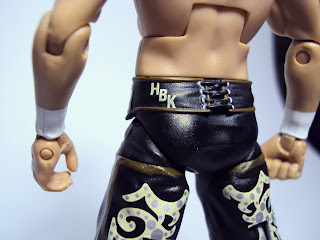 The Heart Break Kid has the standard Elite-level articulation: ball-joint head, swivel/hinge shoulders, swivel biceps, hinged elbows, swivel-hinge wrists, ab crunch, swivel waist, the limited ball-jointed hips, upper-thigh swivels, double-hinged knees and hinge/rocker ankles. The main problem here is the hip joint. Like many WWE Elite figures, the forward motion on the legs is limited so he is unable to hold a leg up at a 90 degree angle. Also, HBK is unable to join his feet together, so it looks like his standing with a somewhat open leg stance. I should also mention that Elite figures don't have the best range on the ab crunch and I don't understand why Mattel can't improve it. I assume they don't want to break up the sculpts too much by enlarging the gap between the abdomen and upper torso. I would also like to see double-hinged elbows. They have them on the knees, why can't they add them on the elbows? These are wrestling figures and some of the common poses, or holds, are impossible to achieve without the double joint at the elbow. I'm hoping this is something the improve on going forward. 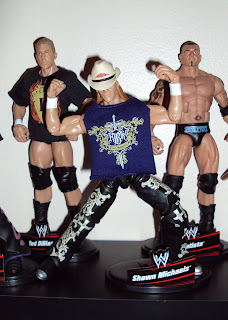 HBK comes packed with his cowboy hat, cut off t-shirt and the standard name tag and stand all WWE Elite & Basic figures include. The hat fits snug on his head, molded in the color and then later embellished with Michaels' logo at the front. His t-shirt is made of a purple cloth with his logo screen-printed on the front. HBK likes to cut off the sides of his shirts so it looks like a towel with a hole in the middle for his head, this accessory recreates that look flawlessly. The name tag is just a piece of cardboard that you bend slightly to fit into the slot on the WWE stand. It's effective, but when you think about it, why do you need it? Obviously, if you bought the figure, you know who it is. Perhaps character-specific bases would be a better idea (i.e. HBK logo base for Shawn, a barbarian skull king base for Triple H, etc). 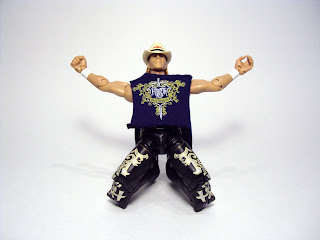 I'm pleased with the figure as I feel it's a great representation of HBK. The downside is the still limited articulation on the Elite level. That needs to be improved upon, but what we have so far, is not horrible and I still rather collect these than the Basic series figures. However, I wouldn't say it's the definitive HBK figure (and I'm sure it won't be the last), so casual fans would be encouraged to buy a cheaper version, which at this point would be the one packaged with Chris Jericho. That one retails for slightly more than the Elite figures' $15, but you get two figures with stands & name tags. The fact that Shawn Michaels is now retired will surely provoke many fans to purchase this version of HBK, but they may be better served by waiting for him to be included in the Legends line. 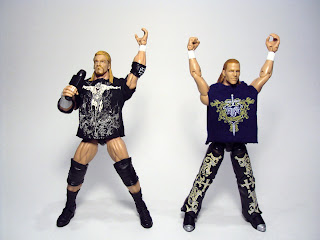