Mattel is aggressively going after Jakks Pacific's title of best pro-wrestling toy manufacturer. But do they have what it takes to deliver a new product good enough to entice new collectors and bring back older ones who have already amassed a large collection? Taker may have the answer! 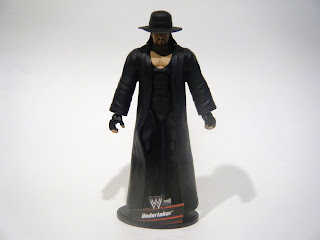 The Undertaker, a living legend in the world of professional wrestling, is one of the most popular performers in the business. As a small boy I remember him debuting in the WWE (WWF back then) and he was fearsome. No one could instill fear in the hearts of fans and opponents like the Phenom could. Today, the Undertaker is winding down as a career of epic battles in the squared (and sometimes caged) circle has taken it's toll on his body. I picked up this figure back in January along with Rey Mysterio and they were my first Elite series figures.

Taker is assembled with a larger body as he is one of the tallest Superstars on the roster. They captured him in his current attire, reminiscent of an Old West undertaker, while the designs on his tights give off a supernatural feel. Mattel uses 3D scanning to capture each Superstars face and sculpt their heads. The Phenom's head and hair are separate pieces that are glued together. His tights are sculpted on his body and his hands and gloves are single pieces. Separate black bands are glued on to simulate the straps on his gloves around the wrists. The detail on the gloves is nice, you can clearly make out the pads on his MMA-styled gloves. 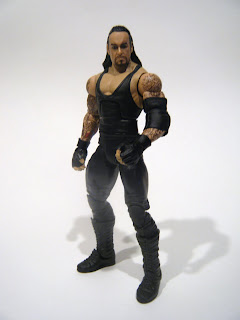 Undertaker is mostly molded in black, except for his head and arms, then later painted a flesh color where appropriate. His gloved hands are also molded in black with the exposed fingers painted in a flesh color. He also has full sleeve tattoos on both arms, even going up his shoulder on the right side and tats on each side of his neck. As far as I can tell the only tattoo they didn't add was the one on the back of his neck. They look good and accurate to his real-life body art. On his right leg he has a rosary design and a demon skull on the left. The paint on his face is clean, although it seems his eyes are bit off. No the color, just the position of his pupils, he has a bit of the "wall-eyes" going on there. 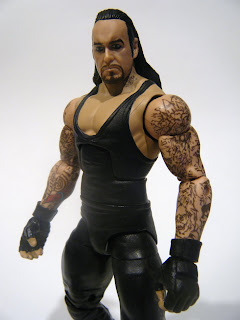 Articulation wise he gets the Elite standard: ball-joint head, swivel/hinge shoulders, swivels at the biceps, hinged elbows and swivel/hinge wrists. The torso gets an ab crunch and swivel waist. The legs connect to the body on what is basically limited ball-joints, then swivels at the top of the thighs, double-hinged knees, swivel at the boots and hinged rocker ankles. The range of the joints is sufficient for many wrestling poses, but not good enought for close quarters combat, like you would have during submission moves or MMA-style grappling. So while you can't have him perform something complicated like the "Hell's Gate" hold, you CAN get him to hold another figure in his trademark Tombstone Piledriver or... 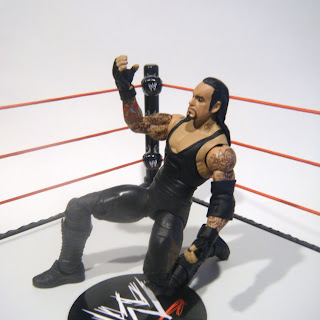 Included in Undertaker's packaging is his coat, hat and removeable elbow brace, along with the standard stand & name tag. His coat is molded from a soft plastic, however it's very stiff at the arms and restricts any movement for those appendages while wearing the coat. Once you slip that off of him, you can put on his elbow brace, which is worn on the left arm. I slides over his gloved hand easily and stays in place at the elbow. It does restrict his elbow somewhat, but not enough to impair it. His hat fits loosely on his head, but it does stay in place. I like to place it just over his eyebrows for that Wild West look when he's on display. 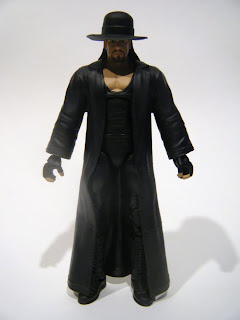 Wrestling figures are always fun, at least they should be. The Undertaker here offers fun for play and looks great on a shelf. I'm happy with the route Mattel's taken for these figures and I'm excited to continue to expand my collection. At $15 they are a little bit pricey, but that seems to be the norm nowadays for "Adult Collector" figures. You can still find Jakks' Deluxe Aggression line at Toys R Us and for about $10, but Mattel's figures surpass them in every way with details and the much welcomed "Superstar scale" that JP's figures sorely lacked.