On Monday I attended "WWE Monday Night RAW" at the American Airlines Arena here in Miami, FL. It had been approx. 5 years since I last attended a pro-wrestling event, so it was fun to go back out and take my wife along, who had never attended that type of show.

I won't go into details about the show as it was a 3 hour-long, Viewer's Choice edition of RAW and for the most part was a glorified carnival act. Most of the matches had completely absurd stipulations that I'm sure many of the kids and women (WWE's target audience nowadays) enjoyed for the sheer goofiness.

I was bummed because my favorite wrestler, Triple H, was still on hiatus while filming an upcoming WWE-produced movie. Randy Orton, who is quickly becoming one of my favorites, has a shoulder injury and therefore was involved in an idiotic "one-armed" match. His opponent was Edge, whose arm was tied behind his back to keep things fair (this was voted on by the WWE.com audience). 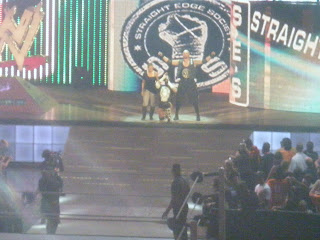 The best part of the night, and my biggest reaction, was to CM Punk coming out to face John Cena (my wife's favorite) in the main event. I like the new mask he wears, it looks killer and hopefully they release an action figure version soon. Unfortunately, that match was interrupted by the NXT rookies, who proceeded to trash the ring and gang up on Cena (and Punk, commentators, ring staff). 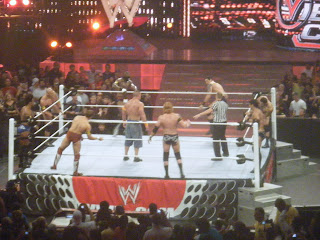 Not bad, actually, because the look of one concerned woman's face on the Titan-tron screen was priceless! I can tell you there were many a disappointed little Cena fans after he was carried away on a stretcher. 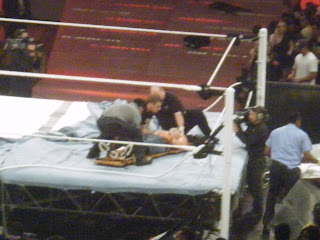 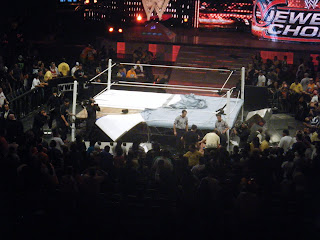 P.S. I'm working on a review of the WWE Elite series, CM Punk, hopefully to be posted on Wednesday. In fact, CM Punk will also be the focus of the next edition of Killer B Customs and Comics on Friday.
Posted by 3B at 12:18 PM