Howdy y'all.  It's Novelty from Toy a Day, and I have this great priviledge of writing here in this great blog.  I did promise 3B that my first review here will be something insectoid and I hope this is Insectoid enough, yet out of the box (haha! pun not intended).

But before I do that, lemme just introduce myself a little bit.  I'm opening a toy for each day of 2010, and was originally posting just pictures online with my random thoughts on the toys just opened.  That has since expanded into a full blown review, not only on Toy a Day, but I'm also guest blogging at various other blogs about the toys I'm opening.  Including this one! 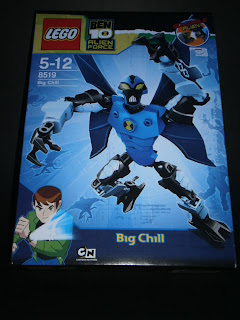 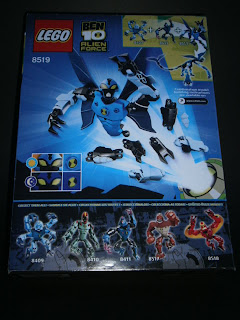 What's this, Ben 10 Lego?  Yup.  Lego got the license for Ben 10 late last year and produced these what at first glance appears to be non-brick-based (i.e. crappy if you're a brick-lover or AFoLer) set.  This isn't the first box I've opened this week, check out ChromaStone on Toy a Day to see what I've previously opened.

The box fuses Lego's usual style with a layout that's common for action figures.  The Ben 10 logo and image is prominently shown ont he front, and the colours are evocative of the cartoon.  The Lego logo, by contrast looks very out of place, set amidst the Ben 10 colours.  The back of the box shows that this really is a construction toy, with the toy in parts, and hwo it can be combined with other toys to make a Modulok-like creature.  The bottom of the box shows the other 5 sets in the theme (so far). 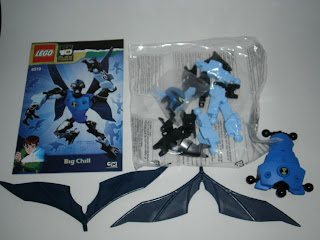 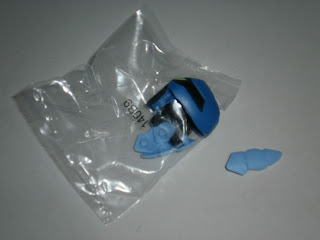 But you didn't come here to read all about the box.  Oh no.  You're here for the toy.  But to get to the toy, it first had to be built.  This is, after all, Lego.  And it's a mess of parts.  When I first opened the box, those two bat wings dropped out, which was a bit freaky.  It's as if some bats bred themselves inside the box.  The build itself was simple.  Snap, snap, snap.  Afterall, there's only about a score of pieces in this set.  And it is targetted for little kids. 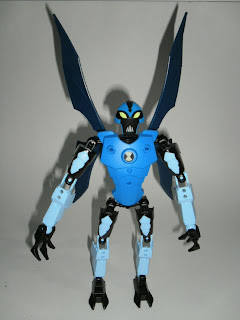 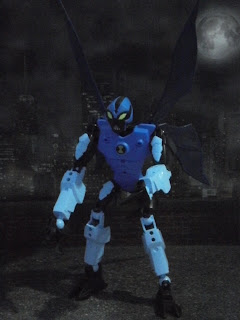 The finished product?  Well, I have to say it doesn't look like Lego.  It doesn't even look like Bionicle, of which it shares parts with.  Oh no.  It looks more like the creature in the cartoon than anything Lego.  And for that it gets good points in my book, although it would probably harm sales among the Lego-philes.

The good thing about this?  The joints which are a hinged-ball type of construction gives the limbs a whole range of movement.  And there are 3 joints per limb, which means there are 13 points on articulation on the figure alone.  Another good point?  It has a very good centre of gravity.  You could pose this whole thing standing on one leg and still balance the figure! 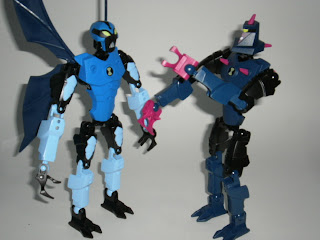 Remember the little bats that frightened me earlier?  Well, they got transformed into the loveliest pair of wings to grace the figure's back.  There's little to no paint, which really I don't mind (this is Lego after all).  The head sculpt is done to resemble the cartoon character, and thanks to Lego's micron accuracy when it comes to the sculpt (it has to be for the bricks to hold together properly), the details on the sculpt are repeated beautifully on the toy.

I like this version of Big Chill a lot  He's probably going to end up to be the biggest of the Ben 10 Lego figures, thanks to those wings.  And please do drop a line after reading this.  I'd like to know what you think and I'm sure 3B would too.
Posted by Novelty at 7:33 PM