[This review originally appeared on Toy A Day. - 3B]

As part of Blog Mash Bash, this review is hosted by Novelty Nostalgia over at his excellent blog, Toy A Day! Buzz on over to check out the review and Novelty's own daily toy reviews. And stay tuned for a Killer B Hive review by Novelty!

Also, look out for a bonus comic starring Kabuki here at the Hive next Monday!

Hello, all! 3B from Killer B Hive here, Novelty has graciously invited me to share a review with you as part of Blog Mash Bash! Today we're looking at Indie Spotlight's Kabuki figure from Shocker Toys.
Shocker Toys picked up licenses for characters from independent comic books and strips. So far, figures of Mad Man, Dick Tracy, The Tick, Golden Age Blue Beetle and more have been announced as part of the line. My first encounter with these figures came about a month ago at my local Toys R Us where they're appearing in the "Collector's" aisle. I was really intrigued by Kabuki when I saw her on the shelf, but I couldn't cave-in to the $16.99 price tag... so, I ordered her directly from Shocker Toys, where she was $15 flat (including shipping!). 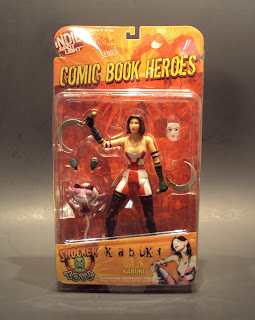 
The "Indie Spotlight" series is Shocker Toys' first venture into the 6" action figure market and has been in the works for several years now. The first series, or "The Maxx" series, features 5 figures all of which include an accessory for the Maxx. Unlike Marvel Legends or DCUC, you don't assemble a large figure by collecting the smaller ones. Instead, the Maxx is sold as a deluxe-sized figure, while the satellite figures include an "Isz" figure so you can "build an army" of the little creatures to, I guess entertain Maxx?
The package, which is credited to "TH3RDWORLD STUDIOS", is pretty cool. 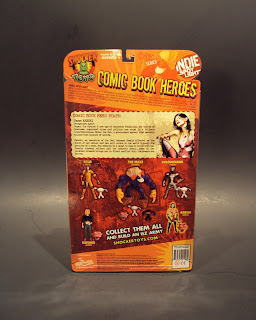 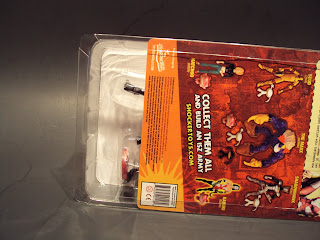 It features a bubble that folds around the bottom and side edges of the card, held in place by two pieces of tape. Once you snip those, the card slides right out the top. The card itself has subdued images of concrete and blood(?) with a few titles across the top. I scanned the card for clearer images: 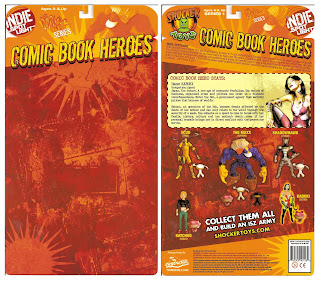 Admittedly, I'm not familiar with this character, aside from seeing her in Wizard magazine. And the cardback has very basic information about her (Japan. The future. Mother killed, shadowy government, etc.), but doesn't even include her real name, any stats, her powers or abilities, nothing like that. I guess she was popular in the '90s when the badass, female assassin-craze was in full swing. I thought she looked cool and would compliment my 6" DCUC and ML figures, plus a line focusing on lesser known comic book characters, or rather, characters not as well-known today can't be bad right? Well, if this figure is any indication, my "indie" shelf is going to be empty for a long time. You'll notice she's missing a hand and a foot, we'll get to that later. First I focus on the pluses. 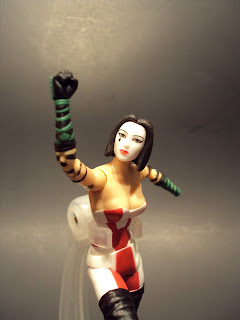 Kabuki has a smooth face sculpt, displaying a plain expression. Her hair has lots of detail making it look like hair and not like she's wearing a helmet. Her top has sculpted edges all around her upper and middle torso sections. Oddly, the picture on the package insert shows her top having straps over the shoulders. I don't know if the figure's look is based on another attire or Shocker's own design, but it doesn't look bad. It may be just a bit too low cut because it looks like she could have a "wardrobe malfunction" at any moment. I assume Kabuki's on the petite side, and although she's a then female, her arms aren't skinny like DCUC females and look appropriate on her. The forearm wraps are also sculpted on with great detail and continue to her uppper arms. She is wearing thigh-high boots with sculpted wrinkles along their entire length and end in thick boot soles on her feet. Kabuki's head, torso and arms are molded in her flesh color. There's no obvious airbrushing or wash on her skin, which makes me think she'd fit right in with Hasbro's Marvel Legends. She has a multi-colored dragon tattoo across her upper back, spreading over her shoulder and upper arm pieces and terminating on her middle back. The dragon's red outline didn't line up perfectly with the green areas, so a bit of her flesh tone shows through on the design. The red and white paint used for her costume is applied very thick on her torso and legs, but ends up looking dirty compared to the white her pelvis is molded in. The green and black on her arm wraps is well done, especially since the wraps alternate between the two colors. 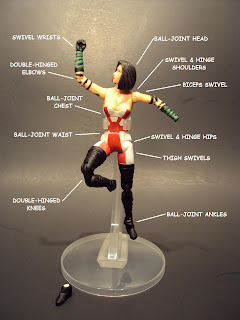 An area Shocker Toys' action figures depart greatly from the competition is articulation. Some of it is great, some of it is "WTF?"-inducing. The neck (or head) articulation is great and not impeded much by her hair, since she has a shorter cut for a female figure. Shoulders are pretty standard swivel-hinge joints. Her bicep swivel rotates all the way around, the change here is the shape of the arm at the bicep. It's angled to cradle the shoulder ball. I think it looks cool and kind of helps the two pieces "merge", not a bad modification. Double-hinged elbows: always a plus! The wrists I'll go into later... No ab crunch, instead, ball-joint chest, me like. Great range all the way around and backwards, not too much going forward, though. Ball waist... FAIL. It gets a good front and back movement, but the side rotation is blocked by the waist sculpt. Sadly, things continue down hill from here...
I think in Shocker's quest to stand apart from the major manufacturers, they took the hip design in an extreme direction, sculpting be damned! What you basically have are swivel & hinge hips, however they chose to spread them out further from the crotch more than ML or DCUC figures have their hip joints postioned. So you end up with this really wide-crotched figure. It's not horrible on Kabuki, but if you look back at the card image and focus on "Katchoo", you'll see the effect at it's worst. There are also upper thigh swivels with the upper thighs sculpted at an angle like the upper arms. Unlike the bicep joint, the legs end up interfering with the hip articulation. She can bring them up in front of her to get into a sitting position, but no sidekicks for her unless she's aiming at someone's ankles. On a good note, the knee joints work flawlessly! The ankles are ball-joints, however, they were frozen out of the package. As I tried to manipulate the right foot it tore off it's ball, leaving the foot in my hand and the ball stuck inside the leg hole. NOT COOL. I was able to successfully unfreeze the left foot, it's motion is fair, only somewhat restricted by the boot sculpt. 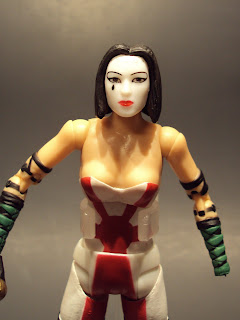 That brings us to the left hand and her accessories. Aside from her removeable mask and the bizarre Isz figurine, Kabuki includes alternate hands. Her weapon of choice, twin sickles, are sculpted onto the hands she's "wearing" out of the package. The alternate hands are just closed fists. The sculpting and paint on the sickles and hands are all great with nice details on the dragon-handles for the blades. When I first tried her hand I noticed it was a bit tough, but the next thing I knew it came clean off, with the peg stuck in the hole. This actually happened before the foot problem. I was able to remove the right hand and switch it with the fist, but after switching it back I noticed the right hand was beginning to tear also. I didn't bother with it anymore afterwards. 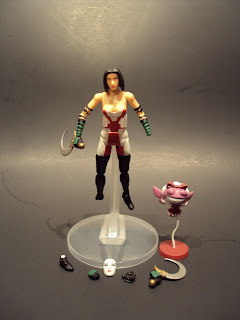 It's really a shame because these look like nice figures with a bit more love given to them than a majority of DCUC or Hasbro's ML. I was really disappointed by it. I contacted Shocker Toys via e-mail about a week ago and have yet to hear a reply. I don't know how large a company Shocker is, but even for a "boutique" figure, $16.99 at retail is expensive. It seems series 1 was released a while ago, when I went to Shocker's online store, they had Kabuki and a couple of other series 1 figures labeled as being "retired" and "clearance", that's why she was $15. Listings for series 2 have figures in that wave priced at $19. These prices include shipping and when you select them you automatically go to PayPal to complete the transaction. No shopping cart here. Fifteen dollars is bad enough for 6" figures, the thought of paying $19 makes me want to vomit. I hope they contact me soon about replacing this figure because I'm willing to give it another try. It would be nice to have the series 2 the Tick on my shelf, as long as he's not in pieces. 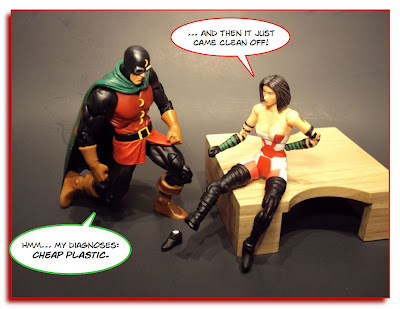