Today, instead of just another edition of Killer B Comics, we also have a review! It may be somewhat late in the game for an Iron Man 2 review, but I think this is a benchmark figure for me. I have successfully avoided Hasbro's 3.75" scale lines since they debuted... until now. Why? SWARM to find out! 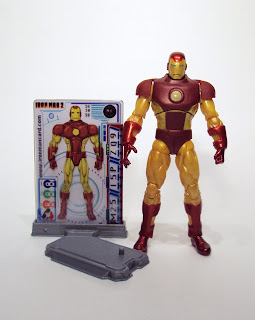 Apparently, this figure merges two of Iron Man's armors: the Mk XIV & XV, between the two of them names such as "Oversized", "Coffee Can" and "Bulky Red & Gold" appear. You can look at the great galleries over at Iron Man Armory and decide for yourself. My interest in this figure goes back to when I was a kid in the late '80s/early '90s and Marvel Universe trading cards were all the rage. This version of Iron Man takes me back to those days and my first encounter with Iron Man in the comics and said trading cards, recalling this Iron Man: 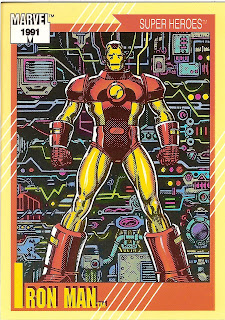 Like I mentioned before, I'm not a fan of 3.75", but that doesn't mean Hasbro's made it easy for me to pass on these figures. I liked a lot of the comic versions in the X-Men Origins: Wolverine line and then Marvel Universe hit with a lot of cool designs. Several times I had a stack of those in my cart, but forced myself to put them back and stick to collecting 6" figures. To my knowledge, this Iron Man armor was never produced at the 6" collector scale and so, I thought it would be nice to finally have a detailed interpretation of it in plastic. I've seen it in stores since the IM2 toys started flooding the market, but most of the samples I ran across had horrid paint issues. Finally, a couple of weeks ago, I was at my local Target store and found this one with passable paint. I immediately placed him in my cart along with the "Classic" armor featuring the horned faceplate, it was the only one on the pegs and since I missed out on him in the Marvel Legends line, I decided now would be a great time to grab him, too.

The sculpt has a great amount of detail for such a small figure. I guess if you've been collecting MU, you're probably not too impressed by now. I would prefer the larger boots like in the trading card image, but these don't look out-of-place, either. He is effective bulky, especially in the shoulders, where I think this armor really distinguishes itself from a lot of the later suits. 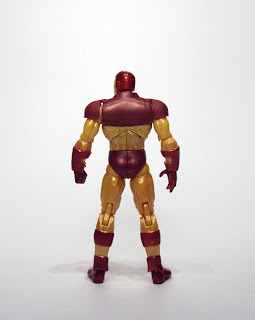 My main issue with this figure in particular and the reason it took me so long to finally purchase it, was the paint. The red areas are nicely done, although the torso gets a darker finish. It's more magenta than the metallic red used in other areas. Basically, his head, gloves and boots all share the same shade of metallic red and it looks great. But for whatever reason, they went darker on the torso. The problem stems from the yellow areas of the figure. It's a nice golden color, but they added a red paintwash to it and this application can be hit or HUGE miss from figure to figure. This is the first one I see where the wash doesn't completely overpower the yellow, yet still manages to stain it significantly. I think I'd prefer no wash at all given how inconsistent it turned out. 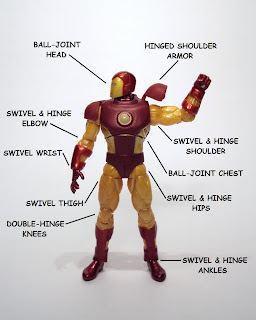 My figure has a bit of a bobble head. The ball joint is pretty restricted to being a swivel because there isn't much up/down motion. While I loved the 6" Mark VI's shoulder armor hinged on the torso, it doesn't work as well on this figure. It breaks up the look too much, I guess because it's hinged a bit higher on the top of the torso. The chest has great 360 degree motion and allows Iron Man to arch his back, however that reveals the yellow inside of the torso. And it's forward motion is completely obstructed by the sculpting on the middle section. I think the lack of a waist swivel hurts this figure a lot more than on other versions of the armor. He can't quite achieve a 90 degree bend at the hips, but the knees have great range almost being able to sandwich the lower leg completely under his thighs. Ankles are restricted due to the boot sculpts, but it wouldn't matter anyway because he could really use rockers to stabilize different poses (a funny point when you put him on his stand). 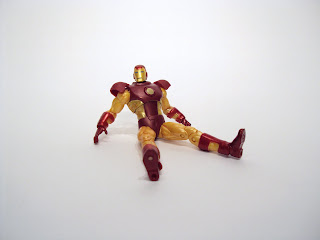 Coffee Can Tony comes packaged with a yellow repulsor blast, 3 armor cards and a display stand. The cards and stand are standard to the figures in this scale. The armor cards represent the version of the armor they are packed with and are basically transparent sheets with different sections of the armor printed on them (one has the torso, the others the legs and arms, respectively). They let you mix and match different parts from different armors and basically create your own Iron Man armor. Kind of nifty, if a little trivial. If I had more of these figures, I'd probably be more excited about it. 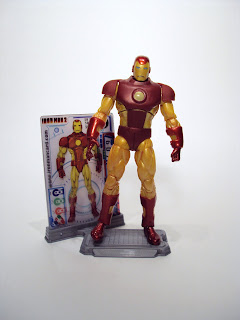 Hilariously, Iron Man can't stand up straight on his stand (remember that lack of rocker ankles?). He leans to the left when you insert the stand's peg into his left foot. Someone hit's the cough syrup early in the morning... The stand is designed to hold the armor cards upright also, so you can display everything in the package on the stand at the same time. The one true accessory Iron Man includes is the repulsor blast. It has an opening that fits over his left fist, mimicking a power blast from the Armored Avenger. It's molded in translucent yellow (hmmm...), with it's base sculpted to look like an explosion of power that trails off into an energy ball(?). It's pretty cool and I will admit it was the second reason I decided to buy this figure, although not to use on Iron Man. You might ask, "What else would you use it for?" Well... 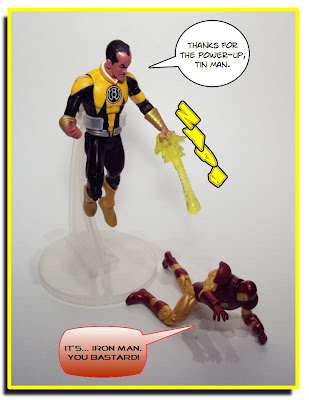 With the current state of the action figure market, $7 isn't horrible for these figures. Another plus being they include a $5 coupon inside, which you can use on your next Iron Man 2 purchase of $20 or more. That's a pretty good deal if you're interested in buying several of these guys. Personally, I'd like to pick up Titanium Man and see how his accessory would work for Sinestro or Romat-Ru. The level of detail and articulation on Hasbro's 3.75 inchers is impressive and I can see why they are so popular. Since there is not 6" alternative for many of these figures, it's a great buy for collectors and casual fans. Of course, sales or clearances are always great ways to stock up and save some cash, but Hasbro is chipping in on that front. I hope I find more of them soon, I have a $5 coupon burning a hole in my pocket! 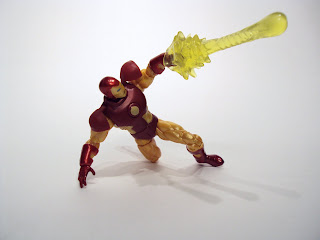