Straight from this year's Royal Rumble event comes the Glamazon, Beth Phoenix. She's the second female figure I purchase from Mattel's new WWE lines after Mickie James. Mickie ended up as an arm-donor for my DCUC Wonder Woman. Will Beth end up the same? 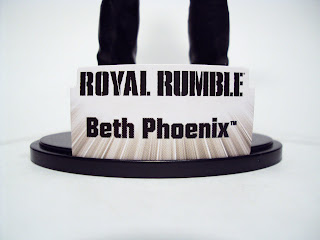 Along with their "Basic" series figures, Mattel also releases "Pay-Per-View" waves with wrestler attires straight from the WWE's monthly PPV events. The lineups are voted on by fans, but don't get too excited, because the WWE design team actually chooses the wrestlers that appear on the list fans pick from. Similar to the DCUC "Fan's Choice" poll, pretty much bogus because it's someone they plan on making either way. But I digress, the focus of today's review is Ms. Beth Phoenix. 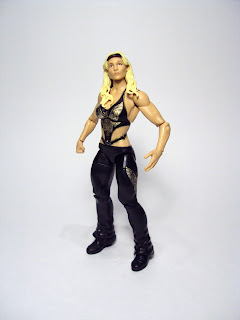 The Royal Rumble took place in January and this Beth Phoenix figure is modeled after the attire she wore that night. This is the second figure she receives, the first being the Basics 2-pack version packaged along side her sometimes mixed tag-team partner, Santino Marella. As far as I can tell, this figure features the same sculpt with the only difference being the paintwork. Beth's captured with a plain expression on her face and the lack of airbrushing or any paint washes keeps the sculpt looking soft. That's a problem across all of Mattel's WWE figures. I would prefer to have her smiling or with an angry stare, something to promote her fierce in-ring ability. Her hair is separate piece with her tiara/headband sculpted into it. 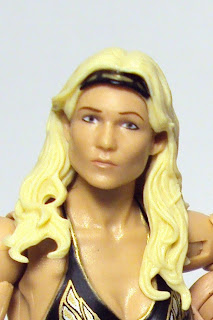 Beth shares her upper and middle torso with the only other female figure released in the line so far, Mickie James (Beth is taller because of her longer legs). This hurts Beth in two ways: first, Beth is a big girl, she's the bulkiest Diva on the roster and her figure should reflect that. Second, the upper torso has a bikini top sculpted in. That's all fine and dandy when you look at her from the front, but from the back you can see the sculpting which is not painted because it doesn't match up with her costume's design. There is a visible mold line on the left side of the middle torso section also. It's not as bad on the right side, but it's a bit rough to the touch. 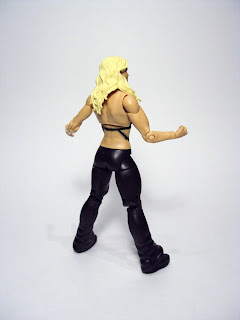 Her arms seem about the same size as Mickie James and are proportionate to the torso. The only difference is the left hand which is sculpted completely open, while James' is semi-opened in order to hold some accessory (she didn't come with any, though). My Beth had warped fingers out of the package, but I haven't bothered to straighten them, yet. Now, you may be wondering why I didn't take a side by side pic with Mickie for comparison? Well, that's because I took Mickie's arms off and put them on my DCUC Wonder Woman as you may remember. Unlike Mickie, Phoenix has a smooth lower torso and legs. The lower legs feature her bell-bottom pants with wrinkles sculpted in and they're a softer plastic so as not to impede the motion of the feet. 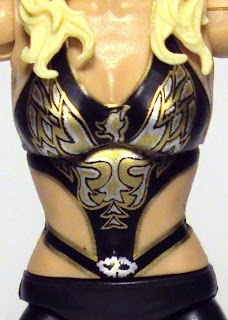 Like nearly all of the WWE figures, Beth's molded in her primary colors with paint reserved for her face and costume details. The apps on her face are all clean and look great, however they don't do anything to improve her bored expression. Her "bikini" top is painted in black with gold trimming except on the back side of her upper section of the torso. The smooth, middle section allows Mattel to paint whatever design is necessary for the character. The downside being that figures like Beth, who wears a costume that covers her belly button, gets her navel painted over. 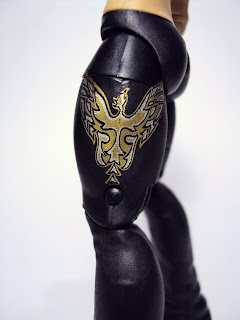 This version of Beth has a firey, silver and gold Phoenix across both sections of her torso with the same design on her left thigh. The "straps" of her costume are painted around the back and the apps are mostly clean save a stray mark on the rear right side. There is no paint on her arms or below her knees. 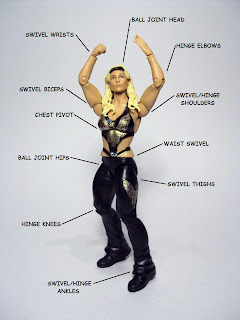 The female figures in the Basics line have a couple of additional articulation points over their male counterparts. Phoenix's head articulation is restricted by her long hair, which although is made of a flexible plastic, it's too thick around the neck area to allow for full motion. The chest pivot only features a front and back motion and even that isn't too effective, with Beth only getting 15-20 degrees forward motion. Her range of motion at the hips is impaired due to her large, muscular legs, so she can't achieve a full sitting position (which will be illustrated in Friday's edition of Killer B Comics!). Of notable mention are the ankle joints. They use swivel & hinge joints similar to the shoulder joints. You can spin her foot 360 degrees with little interference from the bell-bottom pants. The foot hinge has greater range to the front, but still goes backward enough to get her into a "tippy-toe" stance. 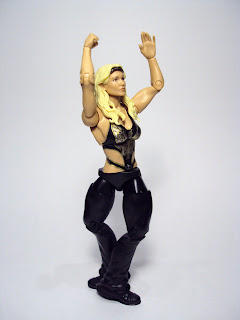 I found this Beth Phoenix at Walmart several weeks back and she set me back about $10. That's what she pretty much retails for everywhere, except of course online specialty shops that may gouge prices based on the character (I won't name any names). Aside from Beth, you get the standard WWE base with a PPV specific name tag. I don't think I've covered this much, but the name tags are just a piece of cardboard you bend slightly to fit into a slot on the front of the stand. They're not particularly great, if you bend the tag too much, it'll crease and look crappy on your display. Also, handling the tags usually produce the "dog-ear" effect on the edges, which makes storing them a PITA. Another point is why do you need a name tag for an action figure you purchased and are obviously familiar with? Nearly all WWE Superstars and Divas have their own logos, so I'd prefer Mattel make character-specific bases that don't require crappy cardboard cutouts. 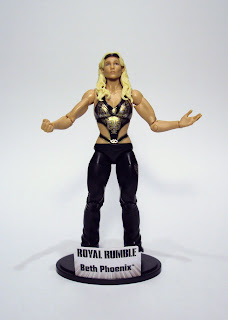 Essentially, you're paying ten dollars for just the action figure because the other stuff is trivial. I'm not sure if Mattel plans to release Divas in the Elite Collection, but if they do they should improve on the articulation and obviously add accessories. For now, these serve their purpose and look better mixed in with the Elites than the Basic male wrestlers do. I wish these were priced a bit cheaper because the complete lack of accessories hurts their value. The $7-8 range would prove better for the Basic/PPV line overall and I think it would move them out a lot quicker, although Walmart seems to sellout of them faster than TRU or Target. Of course, pricing isn't up to Mattel (yeah, right), but if you can wait and find them discounted through a sale or clearance, you'd be much happier about buying them. 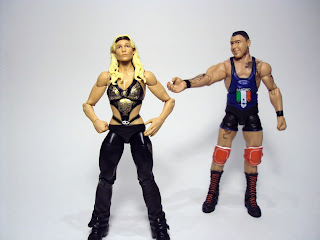 3B's Opinion: Look for a Sale, unless you love the wrestler. 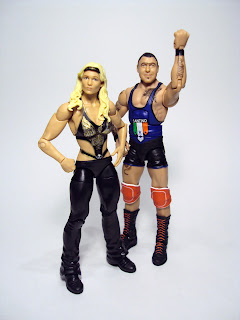