Mattel's 6" Ghostbusters Movie Masters takes a controversial detour with August's release. Is "Ready to Believe You" Ray Stantz (in lab coat!) worth the hassle and price of Matty Collector? Or is he an easy pass for GB fans? Let's find out! 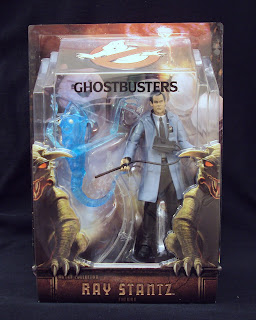 Here we are over a year since the debut of the line and before we are able to complete the main team in uniform versions, we get a lab coat version of Ray (the second Ray figure in the line, by the way) based on the TV commercial that appeared in the first Ghostbusters film. Many fans, myself included, feel spited by the decision to invest in new tooling for this figure as opposed to other, more popular versions of the GB'ers or movie characters that have yet to be released. This fact was intensified after SDCC where Mattel previewed the upcoming Winston with Slime Blower from GB2 utilizing the same torso as the previously released Winston. The problem is that the Slime Blowers feature a vest-like harness, not the backpack straps used on the Proton Packs. Toy Guru later confirmed that the Winston prototype was indeed accurate to the final product and they had no plans to sculpt a new Slime Blower-specific torso. Truly unfortunate. However, I was glad I didn't sign up for the Club Ecto-1 subscription because I would have been beyond disappointed. There may be hope for the eventual release of Slime Blower Ray, but that would mean we have to wait for a reissue of that version of Winston and I just don't see that happening. 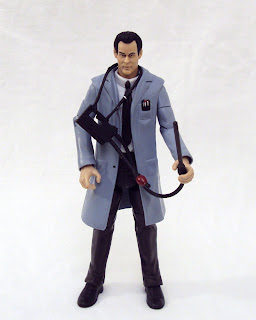 Anyway, back to "I'm not a doctor, but I play one on TV" Ray. This figure borrows the same head from the previous Ray figure, but something seems different. The "skin" has a different finish than the first Ray. It seems painted on on this figure, maybe it's just the plastic used on this one, but it seems to have a matte finish. I don't have the Walter Peck figure, but this figure appears to share a lot of parts with him except for the torso. Ray's torso has glued on tie and doesn't feature a vest (there's irony in that somehow) like Peck. His lab coat is made of a soft, rubbery plastic and is removable. It features some nice details on it, like the breast pocket with the pocket protector and pens. However, in the "Ready to Believe You" scene, Ray doesn't have any pens in his pocket, or a pocket protector. In fact, none of the guys have pens in their breast pockets. Peter has a PKE meter in his and Egon has a large calculator hanging out of his. I'm not sure what the reasoning was behind the pens. I guess they just wanted to add to the "nerdy scientist" look of the lab coats. Also, some of the proportions seem off, like his forearms. They look too long for him and his hands look really huge. Once you remove the coat the torso is comically thin and unrealistic, especially for Ray who is the chunkiest of the 'busters. 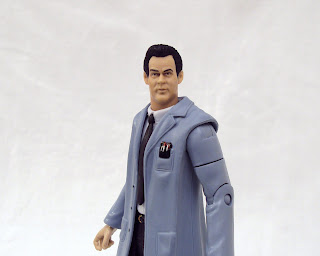 Ray's not a major achievement in the paint department. Most things are molded in the necessary colors with additional paint mainly used for details such as the buttons on his coat, the belt buckle and the mysterious pens. The work on the pocket protector and pens in particular is a bit sloppy, however given the size of that area I'd be impressed if it turned out perfectly. 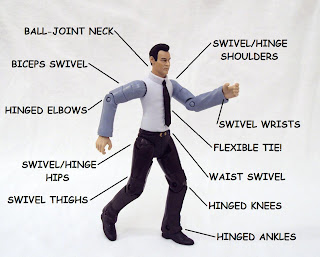 This version of Ray has pretty much the same articulation model as the previously released figures including the one piece head and neck that seem to move on a ball-joint inside the chest. Still no ab crunch, but all movements from waist on down are the same. He gains bicep swivels, but the elbows are restricted to hinges and the wrists only swivel. The hips are limited by the shape of the lower torso and like "slimed" Venkman, the ankles don't have much range due to the pant legs. 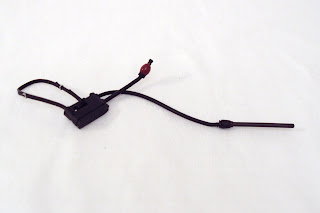 "Lab Tech" Ray comes with the infamous "Ghost Sniffer" he's seen holding in the commercial and is later used by Peter to check out Dana's apartment. It has a special place in my heart because I had the role-play version when I was a kid and thought it was great. Admittedly, it's not a very exciting "weapon" since no one actually knows what it does because it's never explained in the film. This version closely follows it's appearance with Ray, as the strap is shorter, unlike the scene where Venkman uses it slung over his shoulder. It seems a bit too small, but that may just be because of Ray's exaggerated proportions. 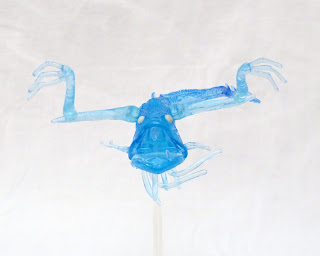 Ray's other accessory is the Subway ghost. It appears in the film for approx 3.2 seconds before you never see it again. I guess it's fitting that he's packaged with this version of Ray, you can call this the "Cameo 2-pack". He's molded in translucent blue plastic and has glow-in-the-dark paint on his eyeballs. The little beard tendrils on mine were warped out of the package, but it actually creates the effect that his floating by, so I'm not going to bother fixing it. 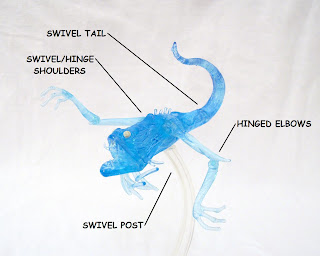 Like Slimmer, "Subs" here has several points of articulation allowing you to achieve a few different poses with him. Most of the movement is in his arms, but the tail gets a swivel. It would have been nice to have a hinged jaw, but it's not a deal breaker. 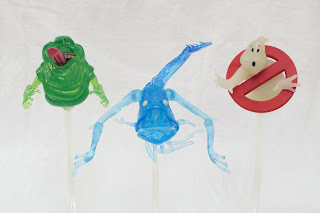 Lined up next to the other ghosts I have so far, he's a nice addition and probably influenced my decision to buy "Lab Coat" Ray. In this line, you have to get the monsters wherever you can find 'em. None of the upcoming releases, except for "Courtroom" Peter, have pack-in ghosts, so this is essentially your only option for army building. 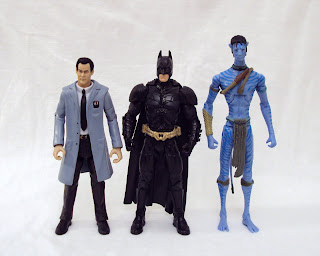 The Movie Masters lines have been hit or miss for the most part. They (eventually) did some great work on The Dark Knight figures, but really fell short on the Avatar line. Ghostbusters has been fun for me, but it comes with great frustration. I hate the fact that the figures are released so far apart and I hate the fact that they cut costs on what would be fan demanded figures and then release obscure, 23 second TV commercial based versions of the guys. Am I happy with this figure? Actually, yes, I am. There's something about it I find appealing, but it's not because of the scene it's based on. If I, or anybody, is a huge fan of that one scene, then I'd be disappointed because he's somewhat inaccurate and he's useless without the other two guys, which have yet to be announced in their lab coats. But this figure is alright with me because he plays well with others (you'll see him in an upcoming comic) and will be fun to use in different pics. However, is he a "must have" figure? No, he isn't. Even for fans of the films, this figure should be an easy pass. 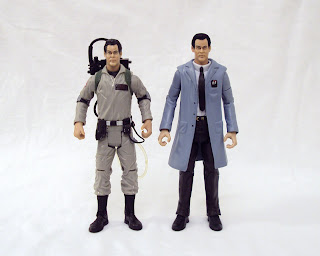 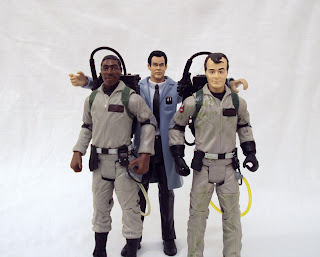 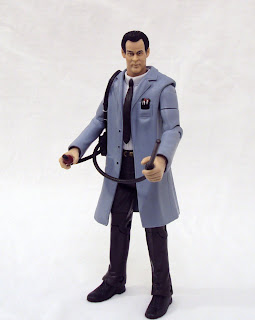