[It's been several weeks since my last review and while I wrote this one over a month ago, I wasn't able to photograph the figure until just yesterday. So pardon the delay and please enjoy today's review.]

In honor of Brock Lesnar's triumphant return to the Octagon, I've finally purchased a UFC figure from Jakks Pacific's new line and who better to start with than the man himself: Brock Lesnar! 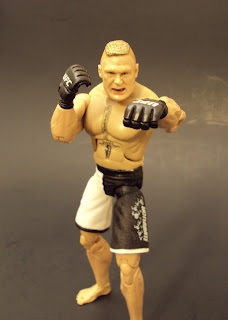 With Jakks Pacific and WWE ending their epic, near-fifteen year run of pro-wrestling action figures, many fans thought Jakks would be done in the action figure market. Little did they know that Jakks locked down the largest, most successful company in the currently lucrative world of Mixed Martial Arts, the UFC, and create highly articulated figures based on that company's explosive roster of world-class fighters. The UFC, or Ultimate Fighting Championship for those uninitiated, is a promotion where combatants participate in MMA bouts. It's not Pro-wrestling, this stuff is REAL. And it's definitely not Boxing, this is ENTERTAINING!

Brock Lesnar is one of the biggest names, if not the biggest, in the sport today and coincidentally he's a former WWE Superstar. Brock joined the UFC after retiring from Pro-wrestling and trying his hand at MMA. His UFC debut took place at UFC 81, the appearance this figure is based on. Jakks' UFC figures debuted at the tail end of 2009 with the "Series 0" preview wave, showcasing what the company replaced their wrestling products with (well, they're actually working with TNA Wrestling now, also, so we'll see more wrestling product from them this year). The "0" wave featured eight fighters and I've seen the figures since they were released, but initially I didn't think they were all that good. However, after Brock's victory at UFC 116 and considering that they're only $9.99 (hear that, Mattel?), I decided to give them a try and review one on the Hive. 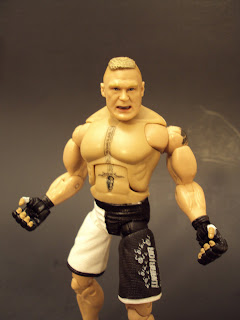 I'm guessing Jakks still uses digital scans to sculpt their figures like they did with their WWE toys, however the execution isn't as crisp as Mattel's. Brock's head looks a bit bulbous, not that he has a small melon on his shoulders, but the figure's cranium seems a bit exaggerated. I will point out that it's not as bad as some of the other figures in the line. Mark Coleman would be one where his head looks enormous, Hector Hammond style (Ha! A comic book reference in a Sports-toy's review! Suck it, jocks!). Lesnar's expression is adequately aggressive, like he's rearing to choke someone out! He even has his mouthpiece sculpted in place, with just the bottom edge showing.

It seems Jakks is going the route of reusing the bodies on these as they did with the old WWE line. However, I do know that they have different bodies for different weight-classes. Brock's a Heavyweight, so he is bulky and muscular, appropriately so, as the flesh and blood Brock is a bear of a man. From what I can tell he and fellow heavyweights like Frank Mir share the same body. I think the arms look great, except for the shoulder ball-joints which appear too small. The rest of the arms look bulky with veiny details. The gloves have plenty of detail sculpted in with the padding, seams and even the underwrap of the hands. His baggy MMA trunks are sculpted on with a great texture that separates them from the smooth plastic used for his skin. The shorts are open at the bottom and have enough depth to create the illusion of being a separate piece. Another area that appears dispropotioned are the feet. They look too small for the rest of the body and create some balance issues when you try posing him. 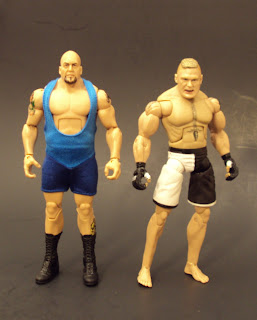 I'm not sure what scale these figures are in because this figure measures 7 and 5/8" while Brock's official height is listed as 6'3". I don't have another UFC figure to compare it to, but I did a side-by-side comparison with Big Show (supposedly 7 feet tall) from the WWE Elite Series 4 (7" scale) and they're roughly the same height. From what I could tell in-store, all the UFC figures are essentially the same height, so it seems Jakks still refuses to make figures of varying height. 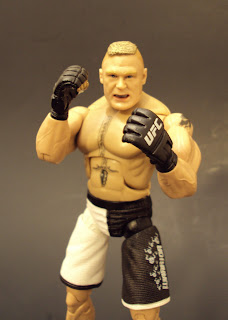 There's not much paint on Brock, all his parts are molded in the necessary color. Most of the paint he does have is used on his head for his facial details and hair, and on his gloves for the wrap on his thumb, the flesh of his fingers and the UFC logos on the backside of the gloves. The logos are clean, albeit a bit light and some of the black from the gloves shows through. 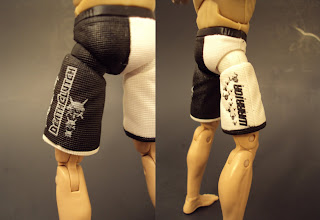 The lower torso is molded in white and then painted with black on the waistband and left side. The upper legs puzzle me... The "flesh" parts are definitely molded in that color, yet I can't tell what color the trunk sections are molded in. They may be indeed two separate pieces fused together. It puzzles me because there is no joint there and why would you not add a joint where two pieces meet? Either way, the sponsorship logos on his trunks are also cleanly applied, if a bit weak like the glove logos. 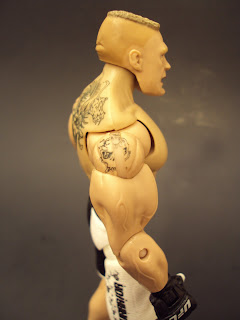 Lesnar also has several tattoos around his upper body with some nice detail, but with a few missteps. The first being the sword on his abdomen and chest. They must have applied it while the figure was in pieces because the blade doesn't line up across the two sections of his torso. 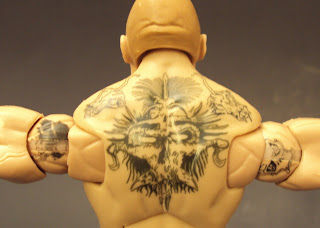 The other errors appear on his shoulders. That joint uses a ball that is cut all the way around revealing the center disk end of the post that goes into the shoulder opening. That means the tattoos are printed across two sections, one of which is right in the middle, so, because of how it was printed, his arms have to be extended to the side for the image to line up. It would have made more sense to print the tattoos with his arms at his sides. The fourth tattoo, or rather, the fourth, fifth and sixth are all printed on his back, exclusively on the upper section of the torso. Those all appear sharp and clean. 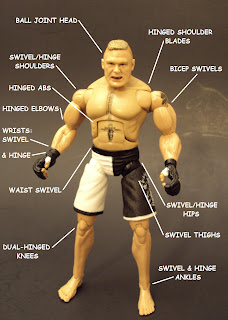 This figure's articulation is where you gain a new appreciation for Jakks Pacific and the only area where they surpass Mattel's sports entertainment figures. Not because of a major increase, they basically have the same exact artic model, but Jakks' wins with the help of the hinged shoulder blades. Those allow the figures to get into "close quarters" holds and manuevers. Something sorely lacking on the WWE Elite Collection figures. Brock can block his face, take a triangle submission, apply a bear hug, a bunch of stuff that Mattel's WWE figures can't. And it's something that adds a ton of realism to MMA figures. I usually say I'd like to see the WWE figures with double-hinged elbows, but the UFC model convinces me that hinged shoulder blades are the way to go for Mattel. Also, all the joints on Lesnar are solid, nothing too loose and nothing too tight. They hold their poses and look great doing it. I think the only real improvement Jakks should make is adding hinged fingers, so they can make a fist or open their hands for different holds. However, it's not a real issue as there aren't many figures with that PoA around nowadays.


Aside from the figure, there is nothing inside the box. Brock has no accessories and that's understandable as UFC fighters don't really wear costumes or swing steel chairs at each other. However, several figures in the line do have accessories, for example BJ Penn includes his lightweight title and Royce Gracie includes his entire gi. I would have liked to see a t-shirt included in the package with Lesnar. It's become customary for the fighters to don their sponsor's t-shirt at the end of a bout while awaiting the winner announcement. I'm sure it wouldn't be too hard to do that, hell, Mattel does it with their Elite figures! 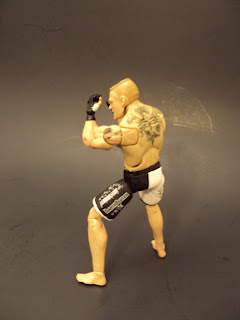 All in all, I'm happy with this purchase and look forward to adding a few more to my collection. At $10 (at least at Walmart and Toys R Us, Target prices them $11.99) they're not too expensive and easily accessible to even casual fans of the sport. The standardized height may be a bit of an irritation, but the awesome articulation certainly makes these fun action figures from one of my favorite sports entertainment properties. I hope they find a way to include more accessories, especially for the non-champions and keep the price at the same point. If you're a fan of Mixed Martial Arts, Ultimate Fighting Championship, or Brock Lesnar, you'll surely be pleased with this figure. 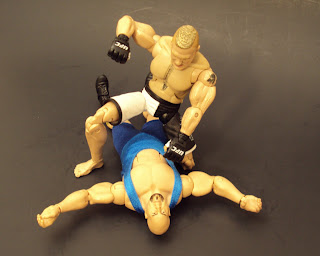