Finally! I finally have Trap Jaw! If you flip the calendar back to February, you'd find one very pissed off 3B. Pissed off because he couldn't get a Trap Jaw off of Digital River's craptastic server. Thankfully, TJ was reissued just 6 months later and this time, I was able to secure him. 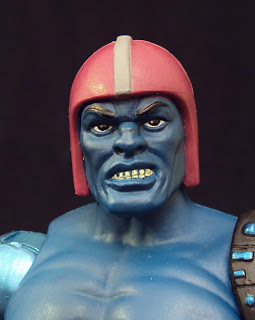 Reviews have been done to death of old Trap Jaw, so I'll keep things brief and just share a few random thoughts with the pics I took. First up is TJ's original form, Kronis. 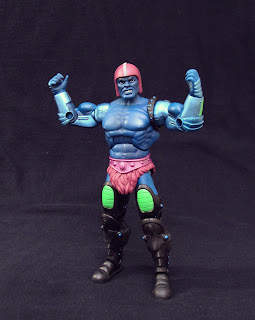 So as the bio reads, Kronis is an intergalactic criminal who hooks up with Keldor (who later becomes Skeletor), but becomes too ambitious and ends up getting Anakin'd by ol'Bonehead. 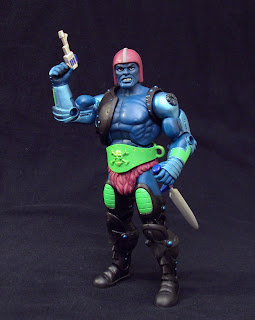 I don't like that history. In my own MotU-thology, Kronis is a tech-freak and becomes obsessed with upgrading his body with all sorts of cybernetic enhancements (not too off base if you look at the figure). 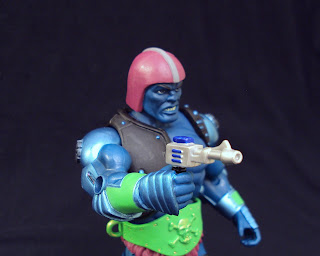 He's kind of like a space-pirate version of Heidi Montag. He eventually gets to a point where his cybernetic components overtake his body and most of his organic components begin to decompose, hence the green face. Oh, yeah, and his jaw fell right off during dinner right into Evil-Lyn's lap. Beast Man vomited for several days afterwards because the scene was so disgusting and he has a weak stomach. 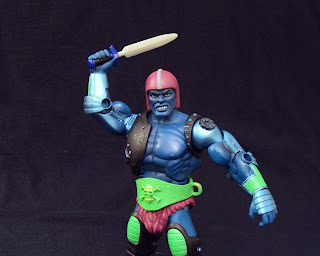 Unlike the initial release of T'Jaw, an item I luckily didn't miss out on was the first Weapons Pak. At the time I purchased it I was really excited about having the grey Scareglow scythe, but I knew that eventually the Kronis weapons would come in handy. 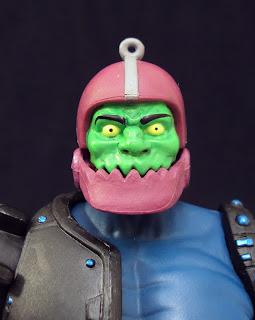 Kronis is all fine and dandy, and I've obviously had fun creating my own little backstory for him, but the real meat and potatoes here is Trap Jaw, in his Trap Jaw form. 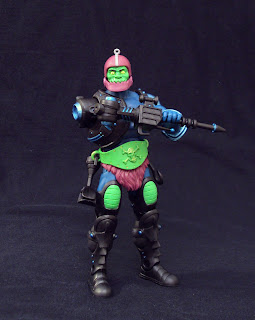 The attachments are loads of fun to swap out! 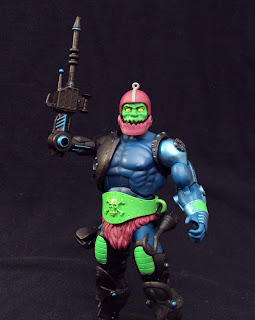 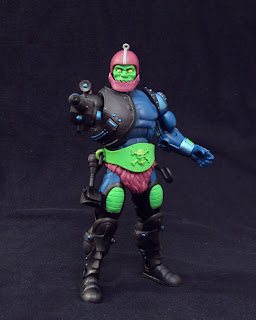 I think I like the laser cannon the best. 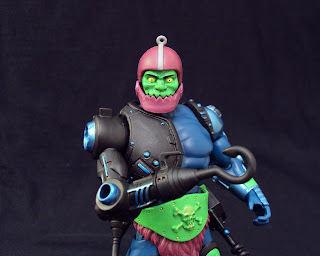 The hook goes with the whole "space pirate" thing (noticed the skull & bones on his belt?). 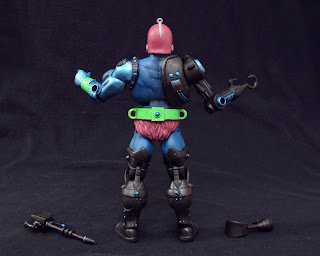 And then there's the clamp that compliments his jaw nicely. 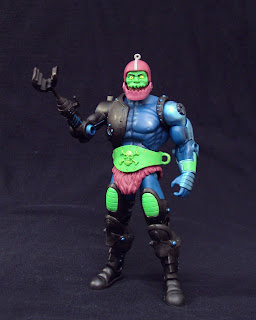 As if Trap Jaw didn't already have loads of accessories, the upcoming "Great Wars" Weapons Pak will feature all of the forthcoming Roboto's accessories in Trap Jaw colors! AND the great folks over at Spy Monkey Creations have released an accessory pack for use on Trap Jaw (they also have the set in Roboto-specific colors). He's going to need more than two loops on his belt to haul all that stuff around. 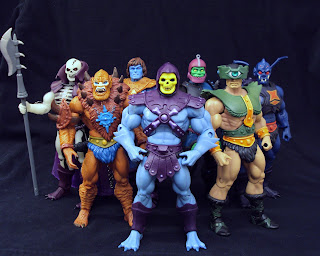 These are all my EVIL warriors so far. I hope to add Evil-Lyn and Mer-Man (from the upcoming two-pack with DCUC Aquaman) soon and then I'll pretty much be done with my MotUC collection as far as the badguys go. 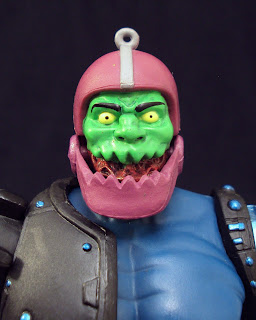