Hey y'all.  It's Novelty again from Toy A Day.  I'm still opening a toy for each day of the year and I'm at Animated August at the moment, which is an entire month dedicated to toys with an animated series or animated movie.  Today I'm opening Transformers Bumblebee and I thought to myself, "Hey, I promised my friend 3B that I'll try to do insect related posts on his blog, and what better insect related toy do I have than Bumblebee?"  OK, so Bumblebee isn't really an insect at all, but I'm not going to let such a small detail get in the way! 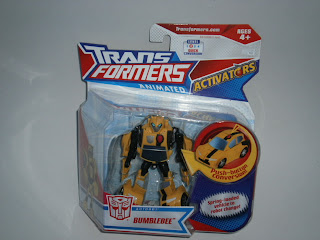 First off, this isn't the normal TF:Animated Bumblebee.  No siree!  This is the activators Bumblebee, which means he transforms by the push of a button.  The box makes that clear on the front. 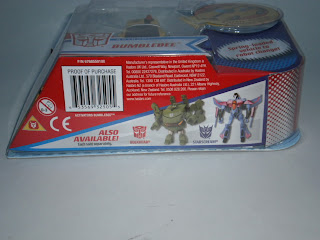 I like the packaging which is nicely  done, with the Autobot logo on the title card and pictures of the actual toy on the cardback.  It is also interesting that Hasbro relegated the cross sell images to the bottom of the bubble!  And as usual, Hasbro does that weird trick with the title card that gives it a 3D look despite being just a single sheet of cardboard. 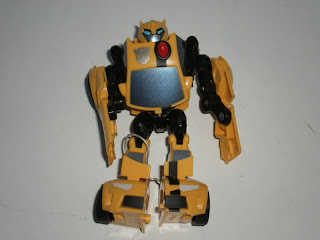 The toy is sculpted to resemble the Bumblebee in the animated series, which is a plus.  The head sculpt is excellent and captures the likeness rather well.  I like how they chose a silvery paint for the windows and Bumblebee's mouth piece and I find the paint to be applied rather well, without any sloppiness.  The joints on my Bumblebee is tight, and I like the overall design - there isn't a lot of kibble left on the figure. 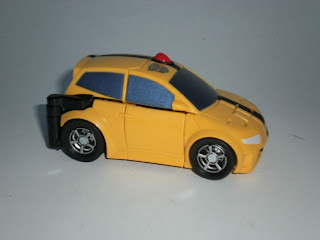 The car mode is compact and stylish.  I have no idea what sort of vehicle Bumblebee is supposed to be, but he does resemble a nice compact little vehicle perfectly.  The chrome wheel rims is a nice detail, but  I think the black bumper thing on the rear where the shoulder hinges are spoils the overall lines of the vehicle mode. 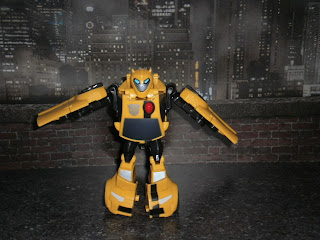 And when the red button on the roof is pressed, Bumblebee springs to robot mode, thanks to erm... the built in springs.  He doesn't fully transform though, the legs still has to be manually manipuated into robot form.

Overall I like this little Activator.  I must admit I've always have a soft spot for Bumblebee (but not Goldbug or Hot Shot) and I enjoyed playin with this Activators version of Bumblebee.
Posted by Novelty at 12:08 PM