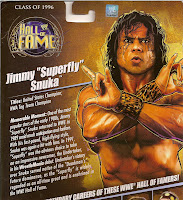 Mattel released their first wave of WWE Legends just a couple of months ago, and series 2 is starting to hit retail now. In addition, they've released an exclusive "Hall of Fame" edition to be sold at, of all places, K-mart! The HoF series features four figures from the first wave and two from the second. Although the set is scheduled to be released on August 28th, my local K-mart already had most of them on the shelf when I visited a few days ago. I was able to snag two of them including today's subject: Jimmy "Superfly" Snuka! 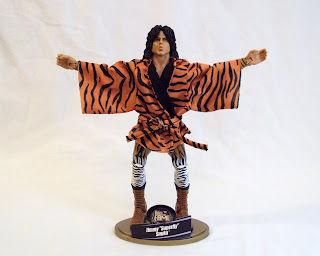 I remember watching Superfly as a kid in the late '80s and early '90s. He was very popular back then, thanks to his awesome athleticism and exotic jungle look. I'm not sure what era of Superfly this attire is based on, but I'd guess it's from later in his career. The Jimmy Snuka I remember most vividly had tiger briefs and wrestled in his bare-feet, like a true jungle warrior. 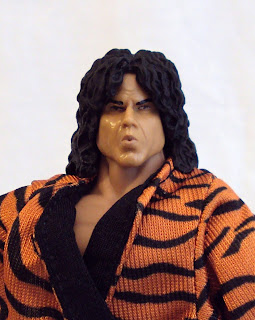 Jimmy's captured in his trademark "exhaling" expression, but unfortunately his hands aren't sculpted in the trademark gesture, which is basically the sign for "I love you" in Sign Language, to match. He gets the bulkier torso like the one used with Triple H and Batista and it works great for Jimmy because he was a bulky dude, but still incredibly ripped. His arms are massive while his legs appear a bit on the thin side. I looked up several pictures of Snuka, but can't really find anything showcasing this exact outfit. I still like it because it captures the essence of "Superfly". 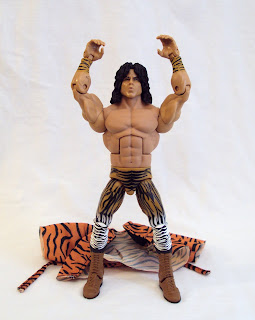 The paint on him is impressive with the tiger pattern spread across his tights and wrists. His skin is molded in the correct color, as is his hair. His lower body is mainly molded in an orangy brown, then white paint is added on the knees and lower leg sections. Black paint is added for the tiger stripes. 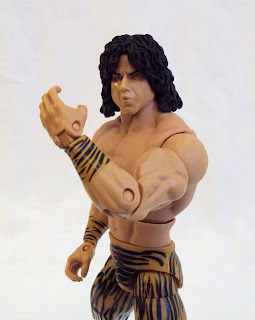 The paint used for the wrist bands is a bit too close to his skin tone, so it looks like he just had the tiger stripes painted on his flesh. My figure did have some stray black spots on his inner right forearm, but I haven't bothered to try removing them. His boots are molded in brown with black added for the soles and the top edges. 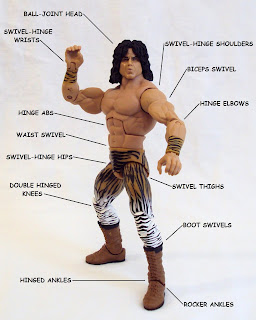 WWE Legends use the same articulation model as WWE Elites, detailed in the diagram above. As Snuka has the larger torso some of his movements are obstructed by the bulky muscle groups. His shoulder-length hair blocks most of the up and down motion of his head, not that it would be all that great anyway with the bulkier neck. Same thing happens to the arms at the shoulders because of the larger chest. Everything else has a good range of motion, but like I've mentioned in past reviews, these guys would benefit from double-hinged elbows to achieve tighter wrestling holds, etc. 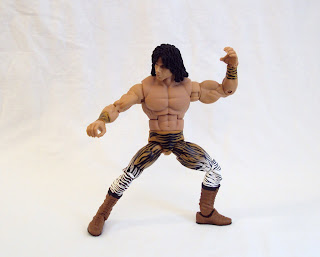 So this is the "Hall of Fame" edition of a WWE Legends figure. Many fans have been bewildered by what that entails because Mattel hasn't released many details about this series. Basically, the HoF Snuka is the exact same figure as the Legends series 2 release. The difference begins with the package, which features a HoF logo and a few different highlights. Inside, the figures receive a gold display stand, a HoF name tag and a HoF "plaque". All other accessories are the same as the regular, non-HoF, release. 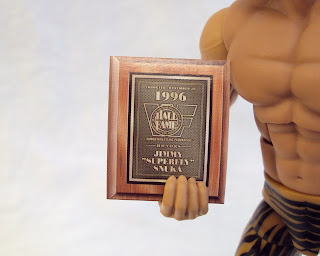 The plaque is almost completely useless. It's printed on cardboard, much like the name tags, and is easily ruined if you don't handle it carefully. I would really prefer they mold these in plastic and just add a sticker, same thing with the name tags. All these flimsy cardboard pieces are becoming a nuisance. Thankfully, all this HoF stuff doesn't add to the cost of the figure, they're at the same price point as the standard Legends line. 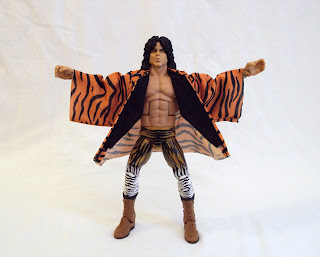 Snuka's true accessory is his tiger-print coat & belt. It's made of cloth with beautiful detail and fits Jimmy like a karate gi, albeit with enourmous sleeves. There are no beltloops on the coat itself, so you just tie the belt around his waist, like you would with the aforementioned gi. It looks great on him and is something I have seen Superfly wearing in several pictures. As this is the only accessory either version of Jimmy has, the HoF version is a better value than the standard release because you get a little something extra in the package. 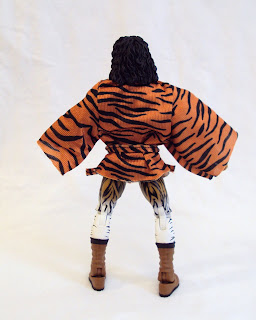 I'm happy with the figure, he looks great displayed on the shelf and is a fantastic representation of Jimmy Snuka. I would prefer a more classic interpretation of him in his tiger briefs with headband, necklace and barefeet, but I'm sure we will eventually see that version of him. And this one successfully satisfies the need for a Superfly figure... for now. Hopefully, the next release will feature his trademark hand gestures and then he'll be ready to leap off a 10ft high steel cage on to his opponents! 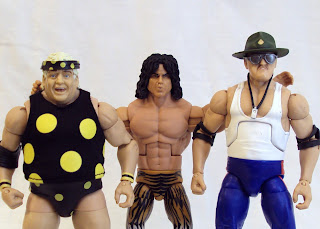