It's been several months since my last edition of CoD, but it's back today with a look at what's on my shelves! 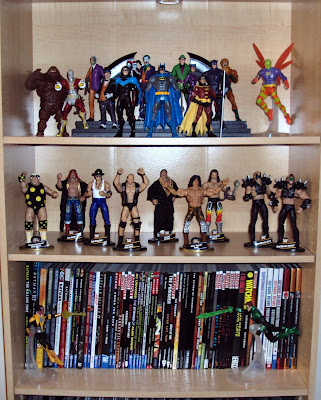 In the bookcase I have DCUC figures holding down the top shelf and it's all Batman. There's definitely that factor of only seeing what's NOT in the display, but after wave 16 comes in, things are going to look a lot more complete! I don't like my current combination of wave 1 Batman and Tim Drake Robin, just doesn't go well. The upcoming Dick Grayson Robin will be a much better match, but will end up eliminating Nightwing from this display. 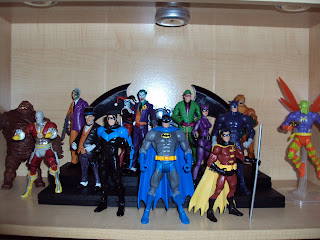 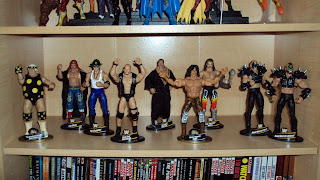 Moving on down the case, we find a toy line I'm really digging now, WWE Legends. So far there are only two figures I don't have from series 1 & 2: Kamala and Terry Funk. I finally picked up Ricky Steamboat, unfortunately he is not pictured. Waves 3 & 4 look very promising and I will pick up at least 4 figures from each series. (pictured left to right: Dusty Rhodes, Iron Sheik, Sgt. Slaughter, Steve Austin, Rick Rude, Jimmy Snuka, Jake Roberts, Hawk and Animal) 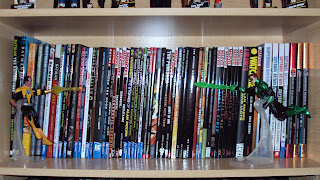 The third shelf houses my graphic novels and trade paperbacks, but there's room for a battle between Sinestro and my custom "First Flight" Hal! 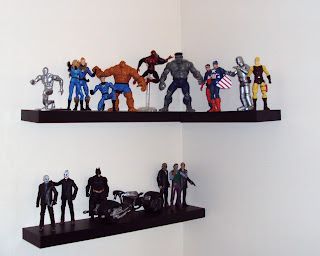 I set up my wall displays with Marvel Legends and several figures from the Dark Knight Movie Masters line: 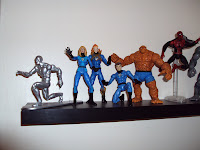 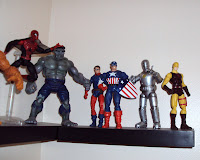 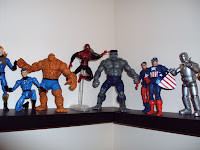 "First Appearance" figures from the Marvel Legends lines populate the top shelf on the wall. The Silver Surfer, Fantastic Four, Captain America, Bucky and Daredevil are all made by Hasbro, while Spider-man, Hulk and Iron Man hail from Toy Biz's original line. 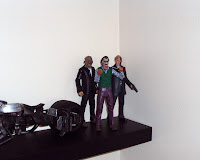 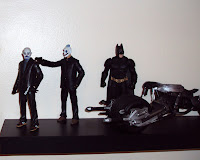 I wasn't sure how to display these because I don't like seeing the same character repeated in my displays and most of the figures in this line are either Batman or the Joker. I compromised by only having the Joker appear more than once and that was only because one figure is wearing a mask. (left to right: Bank Robber Joker, Gotham Thug, TDK Batman, Bat-pod, Scarecrow, Jail Cell Joker, Two-Face) Also note, the weapons the villains are holding are all borrowed from ML figures and I customized the pistol Bank Joker is holding to look more like his on-screen firearm. 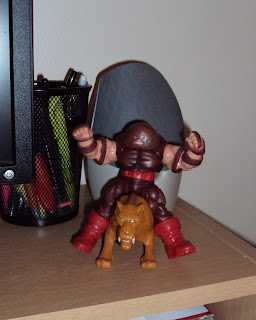