Our first "Foxy Lady" review is a 2 for 1 special! We're looking at both Classic and Modern Cheetahs from DC Universe Classics' wave 13. Initially I only wanted the Classic version, but I ended up getting both. Do these "foxy" feline figures do justice to one of Wonder Woman's most popular arch enemies? If so, which figure is the better one? Let's find out! 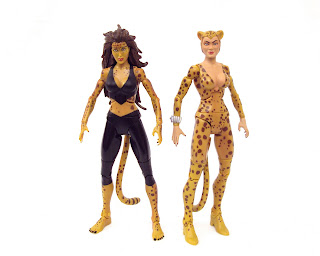 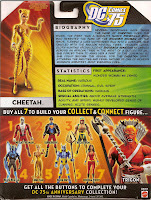 Both Cheetahs are packaged with the same card, which only offers a biography of the classic version (that's the one wearing the cap). Modern Cheetah is a completely different woman and her powers are of mystical origins. I won't pretend to know everything about these ladies, so check out wikipedia or DC Comics for more background information and you can click the image on the right to read the included bio.

The Cheetahs share the exact same bodies except for their heads, feet, and Classic Cheetah's bracelet. The body seems similar to wave 11's Katma Tui, but I didn't really take time to compare them. It's not horrible, but the arms look way too thin, even for a slender woman. The waist also ends up looking odd, it's not thick enough to be in proportion. But it's not all bad, the breasts are sculpted in a decent cup size, keeping the Cheetahs curvacious and foxy (though not at Power Girl levels) and the hips/thighs seem right on target, too. Both figures have the same tail with a little texture at the tip. 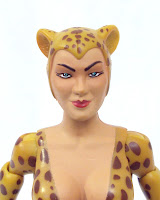 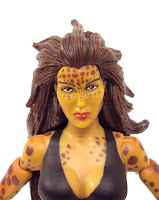 I like the little smirk on the Classic Cheetah because she looks like she's up to no good. But the way her head was sculpted makes it hard to believe she's wearing a cap over her hair and ears. Her face looks way too wide and the sides of the head are too flat. That aside, the sculpt makes her face look elegant and pretty, which isn't always the case with Four Horsemen female sculpts.

Unlike the classic Cheetah, modern Cheetah is a hybrid creature, a cheetah-woman if you will. She doesn't wear a costume (aside from the black outfit) so her head is sculpted with a wild mane of long brown hair. The sculpting on the hair is great with a lot of detail in it and effectively capturing the savagery of the beast woman. However, the face sculpt leaves a lot to be desired. Like the Classic version, the Horsemen did a great job on the face and she looks very feminine. The problem is her blank expression. She's not smiling, or smirking, she's just staring very plainly into the abyss. This version needed to have a fierce look on her face, fangs showing and all that. The really missed a great oppurtunity to have a sensational figure with her. 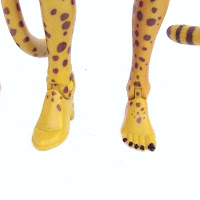 The other main difference between the two are the feet. Classic Cheetah is sporting heeled boots while the modern beast babe is going Commando with clawed feet. I believe the Classic's boots are brand new, debuting alongside fellow wave 13 figure, Donna Troy.

Even though Classic Cheetah is supposed to be wearing a cheetah suit, they didn't bother sculpting the seams on her torso. Instead they just painted on that plunging neckline and saved the tooling budget to show off Plastic Man's cleavage. Does it look horrible? No. But the paint is a bit fuzzy where her skin color meets the cheetah print. I will point out that the cheetah print is very nice and crisp throughout her body.

Modern Cheetah's outfit is plagued by controversy. The initial preview pics Mattel released displayed the her without the black outfit, essentially leaving her "nude". When the figure was released collectors were surprised to find a "censored" version on the shelves. There were a few online retailers that had the original unclothed variant. Personally, I like the black outfit (even though it seems that inaccurate to the comics) instead of having her naked. It differentiates her more from the Classic figure. 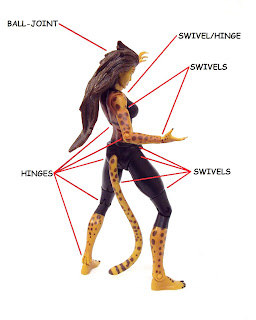 The articulation is the standard DCUC model used since the beginning. Modern Cheetahs head movement is restricted by her hair, but she can still look down. Both Cheetahs suffer from a gummy hip joint which can make it difficult to pose either of them. Also, the tails received probably the most useless articulation ever conceived for a tail. It's a swivel, but not at the base where it connects to the body, it's about a 1/4" down from there. 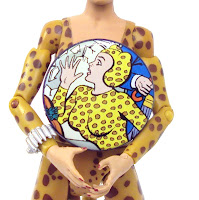 Both Cheetahs include the same accessories. Actually, I'm not sure you can actually call them accessories. The first is the collect & connect Trigon's right leg (I didn't bother taking a picture of it) and the other is a DC Comics 75th Anniversary button featuring an image of classic Cheetah. I guess you can blame the lack of accessories on all the new tooling for another wave 13 figure, Blue Beetle (III). As far as I know these ladies aren't known for carrying many accessories, but it would have been nice to see pet cheetahs packed in, at least for the modern version. She's usually depicted with two, if I'm not mistaken. Classic Cheetah did get her bracelet weapon thing, although I don't know what it does in the comics... poison darts, maybe? 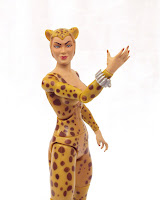 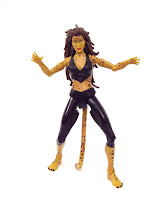 I'm not a huge Cheetah fan and she's one of the very few Wonder Woman villains I'm familiar with (or I can at least point out in a lineup and say "yep, that's WW's arch nemesis"), so I don't have a soft spot in my heart for her or anything. I do like Wonder Woman and I love to have a villain for each of my hero figures (in Batman's case it's like fourteen), so I do feel Cheetah is a "must-have". The figures aren't great by any means, but they fill the void and look nice on the shelf. I can't imagine anyone being overly excited by them (well, maybe a few people...), but I wouldn't say they're an easy pass. I doubt Mattel would ever revisit these ladies, if they did, it would be nice to have a modern version with a fierce facial expression and hopefully a beefed up, new female body closer to Wonder Woman's physique, yet not as tall (at least some larger arms).
Posted by 3B at 12:05 AM