Hey all, it's Novelty again, from Toy A Day.  Back there, I'm on Super Screened September, which basically means I'm opening toys that has links to both being a cartoon/animated series on TV and being a movie as well.  The "tent pole" holding up the big top, or the main event of the month is Dick Tracy, and like all main events, there are some sideshows here and there.  This is the sideshow here on Killer B Hive, and as usual, I try to pick something insect related.  Are you itching to find out what it is?  Swarm to find out more! 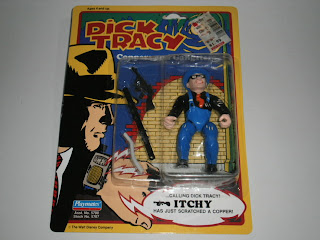 Insect bites can be itchy, and Itchy is what I'm opening today.  Itchy comes on the usual Dick Tracy card, and for the benefit of those who don't follow Toy a Day, this consists of a clear bubble in front with the figures and weapons displayed nicely inside the bubble.  The front of the card consists of Dick Tracy's logo on the top left, with a comic strip representation of Dick Tracy on the left and a communicator on his hand, out of which comes out a speech bubble with Itchy's title just below the bubble.  The backdrop behind the bubble consists of a brickwall that has a spotlight shining on it and that highlights the figure nicely. 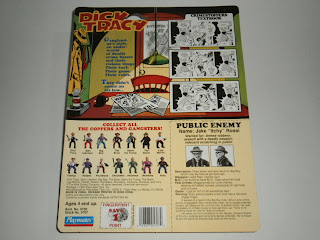 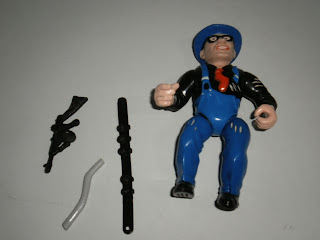 Itchy comes with 7 points of articulation - swivel neck and wrists, and ball jointed shoulders and hips.  The character lacks elbows and knees, so the poses for the limbs are set in stone, so to speak.  Because of the lack of knee joints, it can be a bit hard to get him to stand up straight, and he's not very posable anyways.  the sculpt includes suspenders and a tie on the torso, and a pair of glasses on the face.   There are also "scratches" on his thighs and forearms, which presumable is because he's itchy and scratches himself so much that the clothes are damaged.  The paintwork is acceptable, highlighting the details of the sculpt, and isn't too sloppy. 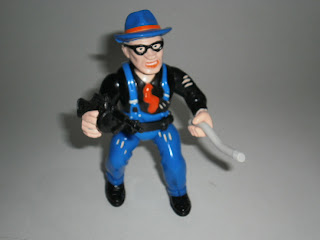 Itchy comes with 3 accessories - a piece of pice, a machine gun and a belt with grenades sculpted onto it. 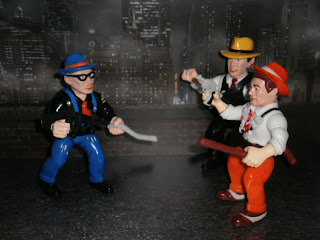 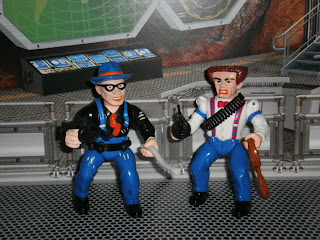