"Foxy Ladies" week continues with a review of a big, blue, badass babe: Neytiri from James Cameron's low-budget indie film, Avatar (not to be confused with Avatar: The Last Airbender, which changed it's film name due to Cameron's flick). But does this sculpted piece of plastic do justice to the on-screen heroine? Let's find out! 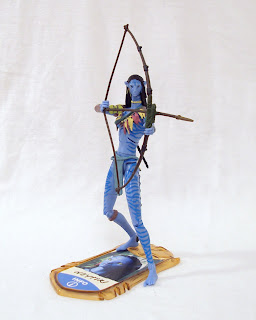 Of course Avatar was anything but a low-budget indie production. For the 2.5 people on the planet who have not seen Avatar, I won't go into a summary of the film. I mean, really, who hasn't seen it by now?! It was released on DVD & Blu Ray (which still looks amazing without the benefit/annoyance of 3D) just about a month ago, so really do yourself a favor and check it out. I watched it for the second time (I know, only two viewings?!) last week and actually enjoyed it a lot more at home. 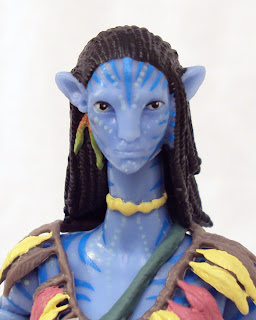 I believe these were sculpted by Mattel's in-house team, which is unfortunate because I would love to see what the Four Horseman could do with these. The main problem with the figure is the face. They just couldn't accurately capture Neytiri's majestic presence. In the film, Neytiri is modeled after the actress playing her, Zoe Saldana (Star Trek), a foxy lady in her own right. While the similarities between Saldana and her on-screen counterpart are subtle, they're much closer than this figure comes to the film character. 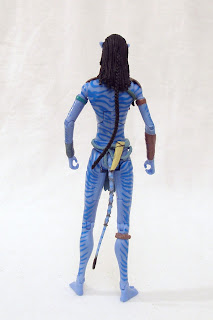 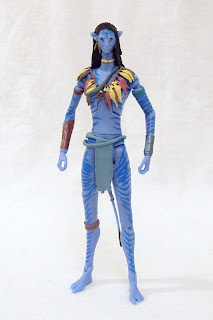 Surprisingly, Mattel added lots of details to the overall sculpt like the bands on her arms and right leg. The feathery bra and belt/loincloth combination are separate pieces added on to Neytiri. The belt has a sheath for her knife sculpted on the back, but unfortunately there's no knife and you can't actually store one there. Her tail is also a separate pieces, though it lacks any articulation, it has nice detail with laced rope sculpted on it. 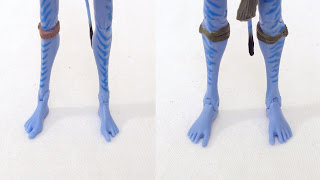 Neytiri (above, left) only has four toes sculpted on her feet while Jake Sully (above, right) has five toes. Initially I thought this was a mixup, but upon viewing the film again, I noticed that it was correct. The male Na'vi also have five fingers as opposed to the females who only have four on their hands. Pandora is a strange place. 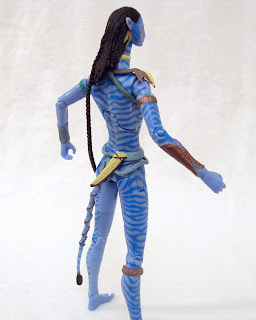 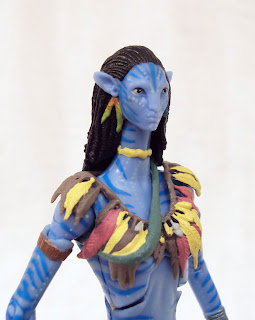 The paint on Neytiri is particularly impressive given how many details are spread across her body. She's molded in light blue mostly, except for the hair and the separate wardrobe pieces. The Na'vi tiger pattern is sharp throughout her body and appendages. The detail on the bra piece is crisp as well. I think they needed to make some adjustments to the paint on the eyes because they didn't quite capture the look of the film there. I think that would have improved the likeness a lot more. 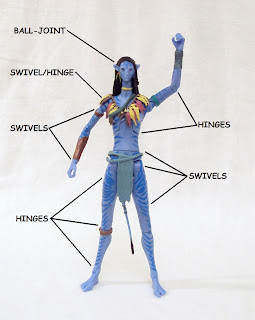 Neytiri has all the points you're familiar with if you collect DCUC or MotUC. She has great range at almost all points, but her head movement is impeded by the sculpted hair. Although there's plenty of articulation, she would have benefitted from having double-hinged knees and elbows to better recreate poses from the film. 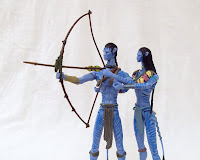 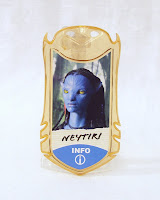 Neytiri includes a display base which is supposedly double purposed for some interactive webcam-based online game, or something. If features Neytiri's image in a rather plain rendering and one peg to fit into her foot. Her other accessory is her bow with permanently attached arrow. It fits her hand nicely, but getting both hands on it and into a logical position isn't easy (double-hinged elbows would help).

When the Avatar Movie Masters first came out they were priced at around $14.99 at most retailer. Neytiri was really popular and probably the hardest to find. I ended up paying about $24 for her on ebay because I had no luck locating her in stores. That was after several months of searching and I promise my motivations for completing the pair with Jake Sully were noble. Looking back though, she definitely was NOT worth that much. I don't even think she was worth the $15 she initially sold for. Recently I saw her at a local K-mart, still at the regular price, while the other K-mart to the South of me had these figures on clearance for $11.00, no Neytiri at that one, though. While that price is more palatable than the initial cost, it's still kind of high for a movie-based figure, especially one with a crappily generic likeness to the character and basically only comes with one accessory. If you really want one of these, you're better off looking for a real cheap clearance sale or buying a loose one on ebay. 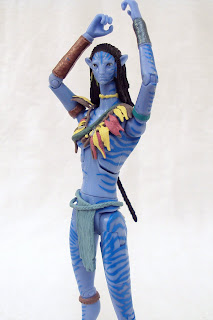 Didn't get enough Neytiri in this review? A special edition of Killer B Comics starring Neytiri is available at Chase Variant!
Posted by 3B at 12:05 AM