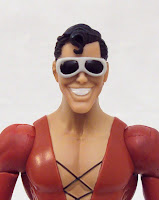 This may be hard to believe, but I just now got around to opening Plastic Man. You could say it was the recent influx of new toys, including Orko and Ministry of Darkness Undertaker, both of which sold alongside Plas on Matty's SDCC sale day, but you'd be wrong. It was for one reason and one reason alone... 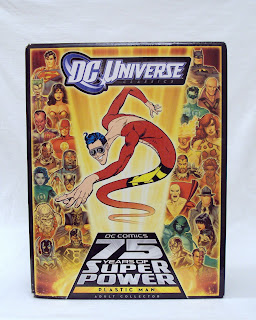 Plastic Man has one of the nicest packages (and I don't feel the least bit ashamed in admitting that) of any action figure, let a lone his DC Universe Classics constituents. The bland, white mailer box is out! In it's place is this beautifully decorated box inspired by Mattel's 75th anniversary of DC Comics package redesign. Plastic Man takes center stage on the front panel of the box over the now standard DCUC cardback image (the back of the box is the same, but adds a "choking hazard" message).

But that's just the beginning. Upon opening the outer box you find this: 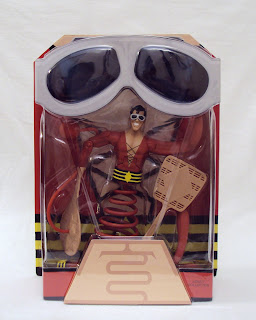 The package mostly retains the standard DCUC shape, but it's been constructed to appear as if Plas WAS the package. 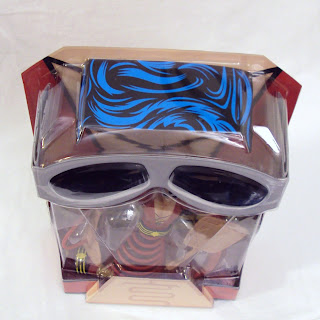 Small package inserts create different effects such as the above shot showing off his hair along the top of the bubble and these pics displaying the arm inserts on each side: 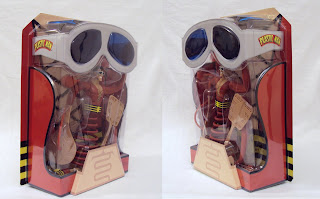 Here's what it looks like once you remove the plastic tray holding the figure in place: 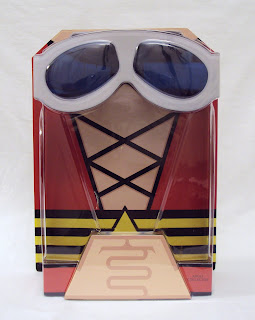 The goggle insert is actually removeable and wearable! Cardboard straps are folded on each side and once opened can lock behind your head so you too can look like a weird-ass, Plastic Man-child. Don't hold your breath for a pic of me wearing those things, sorry.

Here's a shot of the card's backside: 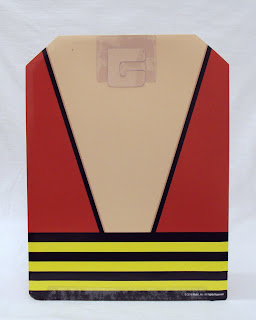 I usually rip through toy packages right away without a care (probably why I haven't posted on Toy A Day again, LOL), but I held off on opening PM because I really wanted to take my time and try to keep the package in the best condition possible. I even contemplated keeping him MIB. Of course, that doesn't fly at the Hive and I knew I had to get to him sooner or later. 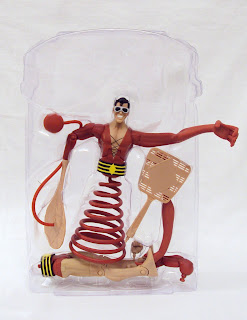 As you can see, PM has several accessories, I dare to call him the Trap Jaw of DCUC and that's always a plus! More accessories don't always equal more fun, but with Plas (just like with TJ) the accessories make sense and compliment the figure marvelously. Out of the package, Plastic Man is sporting his spring legs and paddleball and stretchy arms. 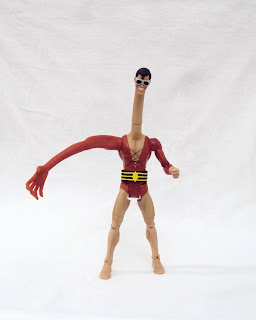 The belt piece appears on both his spring and leg attachments, featuring a peg that inserts into his middle torso. It was a little tricky putting his legs on, but with a good squeeze the peg popped in and remains snug. I hope it holds up over time. 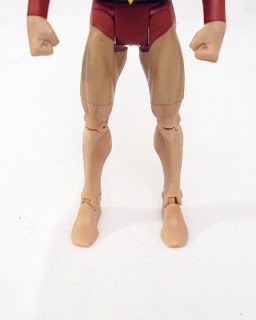 I don't know what the deal with his feet is. Is he supposed to be barefoot? Is he wearing tights? 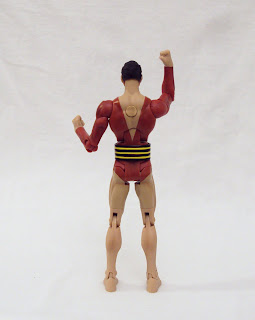 There's a little button in the center of his back which controls a mechanism holding his arms in place. You push this button and hold it down while removing or replacing his arms. Mattel was kind enough to include an instruction sheet, too: 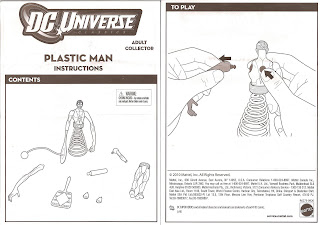 Plas also has a neck extension for the crazy long neck look. This piece attachs to the neck peg where his head would connect, but includes a peg of it's own at the top end for his grinning mug. 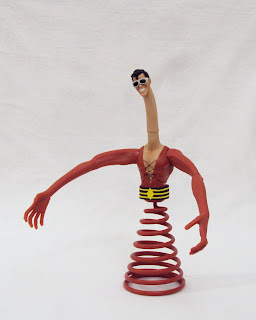 Aside from regular arms, P-Man has a set of stretchy arms that kind of just hang there. They are completely soft so you can't really pose them. I think the better route would have been bendy arms that hold poses, but considering Mattel's Clayface figure, this may have been the better choice. 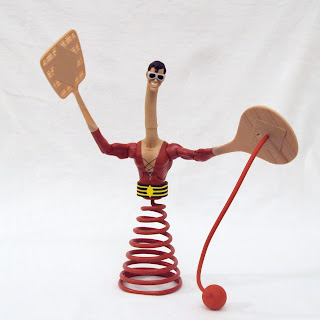 The paddleball and fly-swatter attachments work with the regular arms the same way both fists do with solid pegs that attach at the wrists. 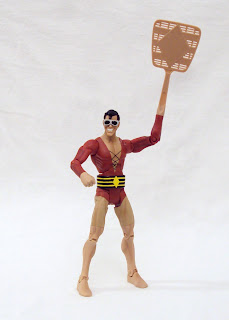 Those attachments are also interchangeable, working on either arm. 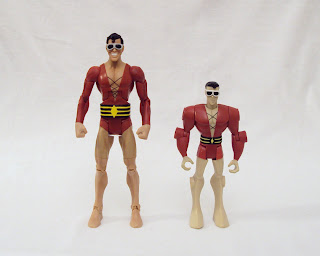 The only other PM figure I have is the Batman: the Brave and the Bold version. That one sucks, especially compared to the DCUC figure. 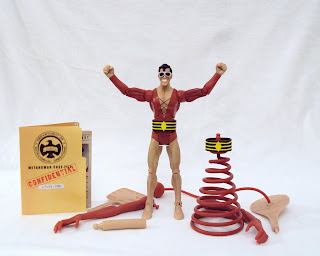 Since the exterior packaging doesn't feature any bio info like the rest of the DCUC figures, Mattel added a cool little file with 2, two-sided, bio cards inside. 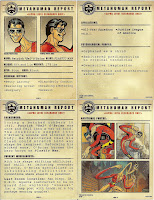 These would be a nice addition to regular DCUC releases, but I doubt they'd start doing them at this point. As you can see Plastic Man is packed full of goodies and turned out to be a really nice figure. Originally, I wasn't too excited when he was announced, but the previews around the net changed my mind and I'm glad I was able to grab one on the sale day. Of course, he's sold out now and I don't know if Mattel would rerelease him. Like the Wonder Twins last year, the SDCC items are pretty much done and done after the Matty sale. I hope they do revisit him eventually, because he's a really nice piece that highlights any DCUC collection.

Hope you bought one! 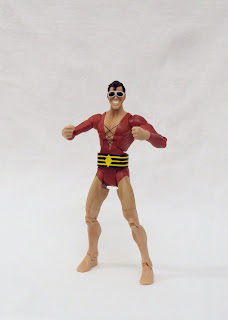