"The All-American American" Jack Swagger is part of the new generation of professional wrestlers in the WWE. He's not one of my favorite Superstars, but he's entertaining enough to warrant adding him to my collection. Was it worth it? 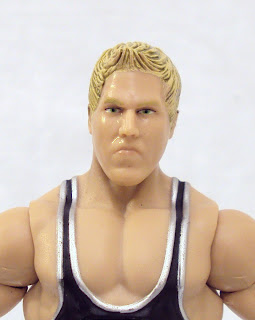 This is Swagger's first entry in the Elite Collection and while he's already appeared in the Basic lines, he receives a new head sculpt (well, at least his face is different). They decided to capture his more serious expression like he started using after he became World Heavyweight Champion. 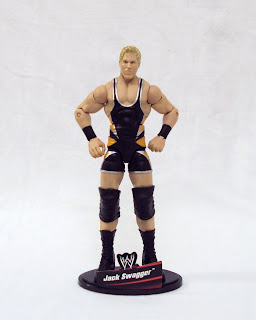 To my knowledge his torso sculpt has not appeared in the Elite series, yet, featuring sculpted tights. I think the size of the torso is a bit small for Swagger and possibly too toned. Swagger's a big, bulky dude, but not in the way Batista or Triple H are, however, this sculpt seems a bit on the slim side. I'll note that the size of the figure overall is good, he's just a bit bigger than the aforementioned grapplers, but not as tall as Kane or the Undertaker, which I believe is appropriate for him. 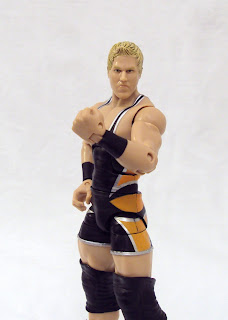 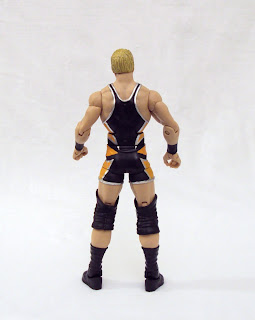 Most of Swagger's paint is concentrated on his tights because his upper torso is molded in his flesh tone and the top part of his.. onesie(?) is painted on with black and silver. Although there's some sloppy applications, mainly on the edges, I like this approach as opposed to molding the piece in black then painting the flesh parts (like they did with Elite 1 Undertaker). It's easier to match black than the flesh tones. The silver-lined, orange triangles on either side of Swagger are applied neatly. Most of the sloppy areas are reserved to the outside edges where the tights' sculpt is. 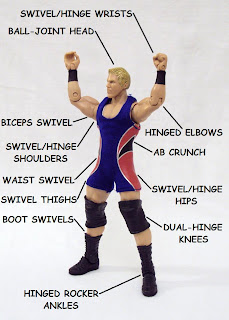 Swag has the Elite level articulation as pictured above and everything arrived in good working order. I'm still hoping for the day Mattel adds double-hinged elbows, but I guess I'll just have to conform to single hinges. 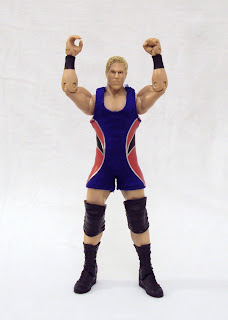 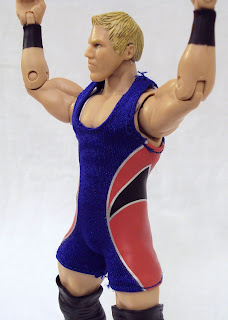 Aside from the usual name tag & stand, Swagger only has one accessory. A alternate outfit made of cloth that slips over his body. The quality on this thing is nice! The red and black areas on the sides are actually a leathery type of material, unklike the silky cloth used for the rest of the piece. Fitting it on can be a little complicated, you have to start by putting his legs through the bottoms, then slide the straps up over each shoulder. It's made too stretch, but I can see tearing it if you pull to hard. 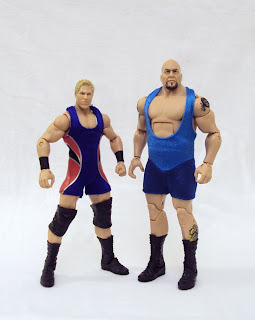 Big Show is another figure with this type of accessory, although Jack turned out better as he has a whole different costume sclupted/painted on underneath.

I contemplated waiting and buying the Toys R Us-exclusive, WrestleMania XXVI Swagger because he looks pretty cool with his red, white and blue attire and kneepads, but opted for this one instead. While the WM Jack has a Money in the Bank briefcase as his accessory (they should have also added his entrance robe), this one lets you change his attire, so it keeps him fresh on your display. You can change between the two attires whenever he starts to look a little stale. And besides, what do you want an oversized briefcase for? 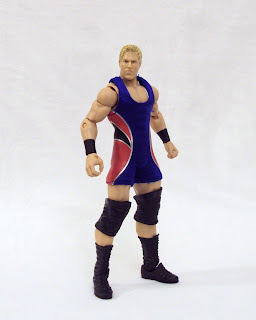