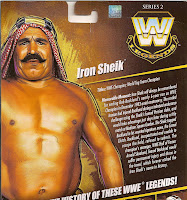 In the 1980s & early 1990s, Pro-wrestling was populated with larger than life, and super-stereotyped, characters who were very clearly defined as the good guys or the bad guys. One of the most popular, or rather despised, bad guys was the Iron Sheik, who in fact was born in Iran and played up the stereotypical anti-American Iranian role excellently. Let's see if his first release in Mattel's WWE Legends line lives up to his legendary status as one of the all-time great heels in Pro-wrestling history. 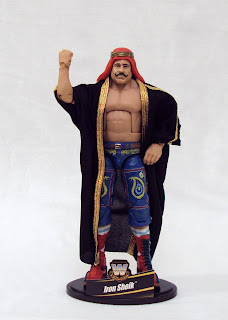 The Sheik was primarily known for being a heel, an antagonist to the hero wrestler in favor with the fans, and he played it to a "T", but I think he's become much more infamous for his out-of-ring antics which include being arrested for possession of cocaine alongside fellow 80s-throwback and a Face, "Hacksaw" Jim Duggan. More recently, the Sheik's exploits during shoot interviews and other internet videos have made him a wrestling anti-hero. The dude is outspoken to say the least, but some of the stuff he says will hit you with equal parts bewilderment and hilarity. 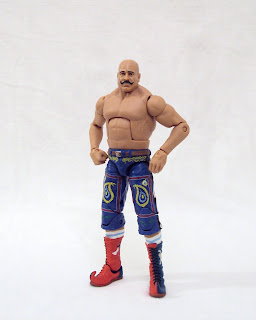 Sheiky-baby is sculpted with his trademark burly man mustache and wearing his "IRAN" long shorts with his also trademark curly-toed boots. The likeness here is spot-on. It seems Mattel created a new torso for him, too, because I don't think it's been used on any other figures. It features a longer abdomen and prefectly captures his puffy-chested bravado. Most of the details on his shorts are saved for the paint department, but the belt, pockets and seams are sculpted. 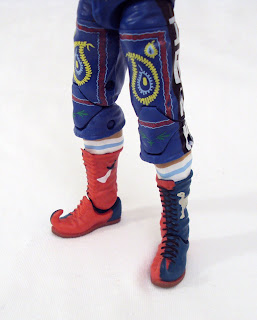 Most of the paint on Sheik is reserved for his shorts, socks and boots. I'm not an expert on Iranian attire, but I assume the designs on his clothes are inspired by such. All the paintwork is sharp and impressive given all the small details in the design. "IRAN" is painted vertically along the length of each leg, interrupted only by the peg holes where his knees connect, a problem on more than just this figure. The boots get the two-tone treatment just as the real life Sheik's. 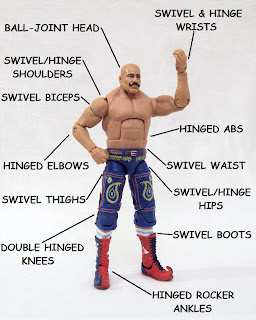 Articulation is standard here with the only problem area being the hips. The shape of the lower torso impedes a lot of the vertical movement in the legs. You can't get the Sheik to sit up at a full 90 degrees. That seems to trouble many of the Elite/Legends level figures. Aside from that everything works as it should, but, and I feel like I'm beating a dead horse here, I would really love to see double-hinged elbows incorporated into these figures. I think that would be the way to go as opposed to the hinged shoulder blades on Jakks' UFC figures, which would disrupt too much of the sculpt. The improved elbow articulation would greatly increase the ability to achieve authentic wrestling holds and create awesome poses. 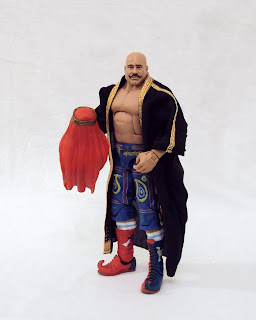 The Sheik includes some true-to-character accessories that are really nice pieces. First up: his trademark headwear which from my quick research on Wikipedia is called a Keffiyeh. It's molded with a soft red plastic shaped to fit around his head similar to the towel/hood used on the Elite Kane. The gold band is painted on. Next is his robe, made of a silky fabric with gold trim stitched in. I like the fact that it's a soft good, it works well and adds to the authenticity. The trim is thick and can make keeping the keffiyeh in place tricky, but in the end it completes the look perfectly. Sheik of course comes packaged with the standard WWE display stand and name tag featuring the WWE Legends logo. 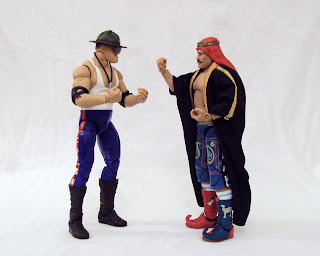 The Iron Sheik is one of those great heel characters you never forget and I remember him fondly from my childhood, growing up watching the WWF in the days of Hulk Hogan, the Ultimate Warrior, Brutus "The Barber" Beefcake, and Randy "Macho Man" Savage. He's a figure any fan of that era will enjoy and is a great figure all around. I'm glad I found him so soon, he was at my local K-mart last week along with "Ravishing" Rick Rude and Jake "The Snake" Roberts. There was only one of each when I spotted them and promptly picked up all three. The Legends line has been really great so far and I can't wait for Series 3 to hit stores. 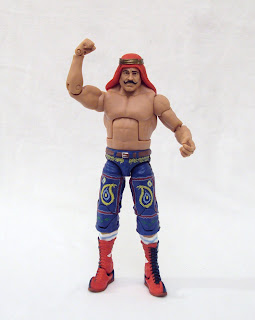