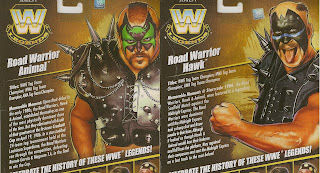 Mattel's WWE line has been really impressive so far. Between the current Superstars represented in the Elite Collection and classic grapplers in the Legends line I'm up to 24 figures already! Today we're looking at a couple of yesterday's most popular wrestlers: The Road Warriors, Hawk and Animal! 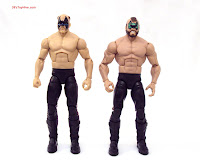 "Oooooohhh, what a rush!!!" That battle cry signaled the arrival of one of the most fearsome tag teams in the history of Pro-wrestling, The Road Warriors: Hawk and Animal. I'm not as familiar with this incarnation of the duo as they were made known to me during their WWF years where they were known as the "Legion of Doom." However, they basically had the same look just with a few different colors. Inspite of being best-known as a tag team, the Road Warriors are sold individually in the first series of Mattel's WWE Legends.

The likeness on these is fantastic just like the rest of the Legends line. I really dig the snarl on Animal, but was a little disappointed by the flat expression on Hawk. Oddly, his card image portrays him with his tongue sticking out, while Animal's package image has a plain expression. Hawk's a bit taller than Animal, just like the real-life counterparts. I'm glad they captured that detail as these guys were always together and will more than likely be displayed together by most fans. 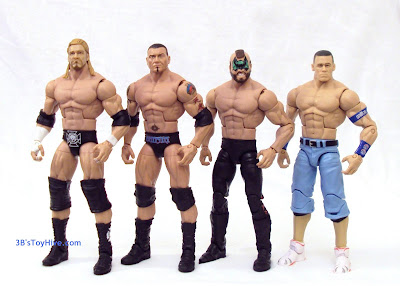 Animal takes advantage of the larger, ripped torso like the other figures in the above picture. I'm not sure what he looked like in the early days of the Road Warriors and he definitely was a massive dude, but I don't remember him being this cut. It may just be improvisation on Mattel's part and they decided to give him this body as opposed to sculpting a brand new one. 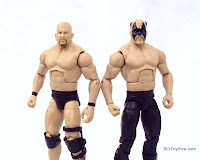 Hawk shares his body with Stone Cold. He's still a massive brawler, but not at the extreme of Animal. The slightly less-defined musculature is absolutely correct for him.

Most of the paint on both of these guys is reserved for their face paint. The apps are mostly clean with only a few minor stray spots on each of my figures. "WARRIORS" runs down the length of each of the wrestler's legs, interrupted only by the peg holes where the knees connect. 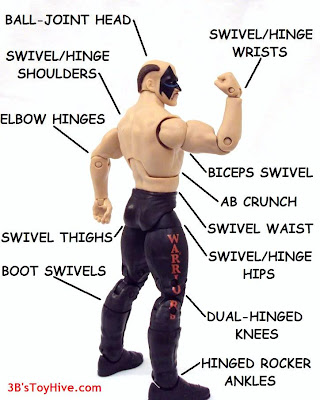 Hawk and Animal share the same articulation model and have decent range at all points. Hawk may have a small advantage as Animal's bulky torso limits some of his head and arm movements, but no more than other figures sharing the same sculpt. 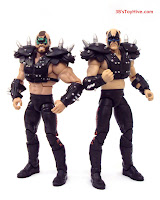 Both Road Warriors include the same accessories: their trademark spiked shoulderpads and gauntlets. All three pieces are molded in black with silver paint used on the spikes. Everything is completely removeable with the shoulder pads closing up on the back and each gauntlet having straps with peg closures on the inside. It seems all of these are a bit stretched out on Animal, again because of the bulkier torso and I hope that doesn't degrade the closures over time. I can see them breaking if you're not careful, but they aren't excessively fragile. I don't know why, but the spikes on the back portion weren't painted silver like the rest of them.

Admittedly, I'd prefer Hawk and Animal in their L.O.D. colors because that's the version I most remember, but this version is still awesome. Both figures feature a great likenesses to their real-life counterparts and together form an intimidating area on your display shelf. When Mattel eventually re-releases these dudes in Legion red/white/black, I hope they introduce a more accurate torso for Animal, but it wouldn't be a deal breaker and I'm sure I'd still by the pack (assuming they're released as a Legends two-pack). 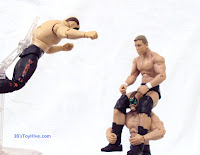 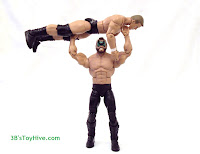