Today I'm reviewing my third and final San Diego Comic Con 2010 exclusive from the Matty Collector sale this past August. This was the number one, and in many ways the only, SDCC exclusive item I wanted when they were revealed by Toy Guru on G4 and I am happy to present it to you in today's review.

It's the Undertaker in his Ministry of Darkness attire from WrestleMania XV! 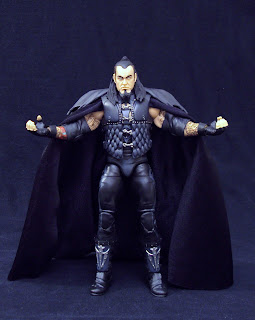 What can be said about the Undertaker that hasn't been said thousands of times before? The man is a legend and has remained one of the top Superstars in professional wrestling for the past 20 years. This SDCC exclusive figure captures his look from WrestleMania XV (that's 15 if you forget your Roman numerals) during his time as the leader of the Ministry of Darkness, a faction of "evil" wrestlers within the WWF. It's hard to believe that was over ten years ago. I was completely captivated by the WWF programming in those days and the MoD storyline was fantastic. 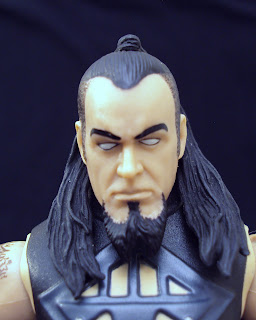 Even though the Undertaker has already received plenty of love in Mattel's WWE toy lines, he receives several new pieces making this one bad ass SDCC exclusive! Starting with a new head, Taker features a new clean-shaven face save for the wicked double-spiked goatee. His hair is also a separate new piece recreating a "samurai" ponytail look. 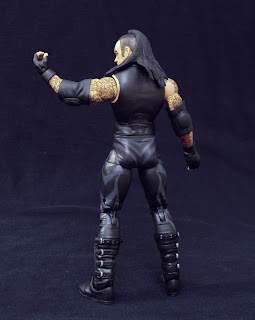 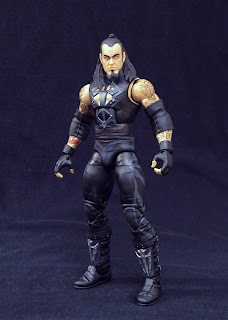 Instead of going to the parts bin and painting on his Ministry outfit, Mattel sculpted a new torso with the Undertaker's "T" logo sculpted on his chest. Small details such as the studs and openings on the logo were recreated faithfully. He also has newly sculpted gloved hands with much less padding than the MMA-styled gloves of Taker's Elite release. I'm not sure if I should count the elbow pads as part of his sculpt or accessories since both are removable. These are the same as the Elite 1 release although now he has two of them. The Phenom also receives new boot sculpts with beautiful details all around. Studs, buckles, straps and the previously mentioned "T" logo all appear on each boot.

A lot of detail goes into the tattoos on these figures, all recreated using photo reference from each Superstar. Taker easily ranks as one of the most tattooed brawlers on the roster, but Mattel takes the extra steps to get them right. 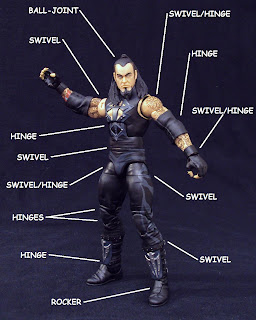 It's not specified if this release is an Elite or Entrance Greats figure, but I'd say it's a solid mixture of both. Obviously he easily fits into the "Greats" category with his wardrobe, but I say he's an Elite figure. Don't let the get-up fool you, he has the Elite/Legends articulation model, which is something the Entrance Greats series lacks. I understand Matty's reasoning for using the solid Basics' torso since the "Greats" are primarily display pieces, but I'm glad this exclusive was given the superior Elite-level articulation. Everything works as it should, except he shares the same hip problem the Elite Undertaker and Kane have of being unable to raise the legs forward at 90 degrees. Other than that: flawless. 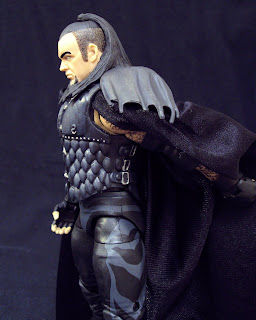 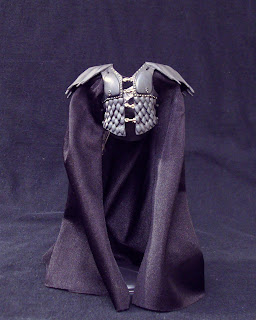 Elbow pads aside, Taker really only includes one accessory, but it's a really nice one! It's his cape/armor combo, completing his entrance attire from WM15. It's mainly a single rubbery plastic piece that buckles down on each side using pegs cleverly disguised as the actual straps on the armor. The cape is made of silky cloth sewn into the bottom of the armor's shoulder area and drapes beautifully. It's actually really long, longer than the figure is tall, so it creates a nice trail, something like a wedding gown, I guess, but for a wedding in hell. It's a little tricky getting the armor off of Taker because you have to work it around his hair, but not with nightmarish difficulty or anything.

There is of course the token WWE display stand, but this time no name tag (WTF, Mattel?). Seems odd to not add one of those crappy cardboard tags (hey, I've gotten used to them!), but no matter because what they SHOULD have included was an Entrance Greats musical stand! That would have really complimented this figure nicely instead of that plain old flat stand. But it does not detract from the figure itself. 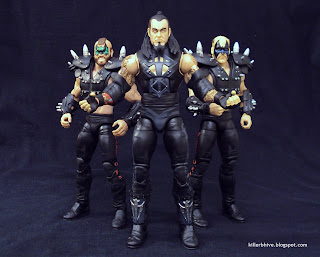 I like to create my own little mythologies for figures, especially when they're figures I really enjoy. Here I have the Taker and his minions, The Road Warriors. If you don't know anything about the figures or pro-wrestling, you'd think they were from a fantasy or horror line, wouldn't you? You don't have to be a fan of pro-wrestling for this figure to appeal to you. It blurs the line between reality (as real as Pro-wrestling can be anyway) and fantasy. He has the Gothic/vampire look going which could blend in with so many different lines, he looks pretty boss next to MotUC, too. 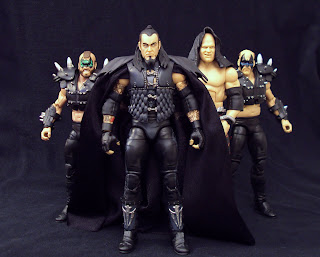 Oh, I forgot to mention his maniacal brother, Kane, who must be shackled until you are ready to release him into battle! There are two more Legends figures (coming in series 4) which I'm eagerly awaiting so I can add to this little group. They'd look totally awesome and would be the dark lord's demolishers (*wink*). I can't wait!

So, the Undertaker was available on Matty's site for I believe over a week before he sold out. I don't know if Mattel considers that a success or a failure, but I will say that they went almost all-out (remember the stand?) and created a really great exclusive for WWE fans. I truly hope they continue and bring another great exclusive to next year's SDCC, because a lot of love went into this figure and it's easily in my top 5 figures of 2010. If you're still on the fence about it, I'm sure you can find him on ebay or one of those specialty shops online. I paid $30 and some change for him after shipping & taxes since he shipped with Orko & Plastic Man, so if you could find him for around that price, I'd say it's a good deal. I doubt Matty will revisit him, so you may want to consider that also.