Hello everyone.  It's Novelty from Toy A Day, and just in case you missed Anton Arcane from last week's Swamp Thing week here on Killer B Hive, it's Monster October over at Toy A Day, and since I promised 3B that if I have any insect related stuff, it'll get reviewed here, so this figure, a monster alien from Ben 10 will be the focus of today's review here. [Flying insects we like... spiders, not so much. - 3B] 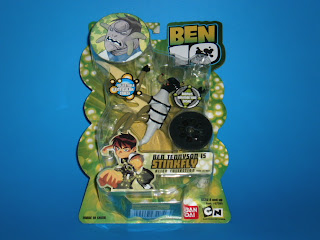 Stinkfly is one of Ben's original 10 aliens, and the only one that could fly out of the original 10.  As such, Stinkfly got quite a bit of use in the first 3 seasons of the cartoon.  The card is crowded as usual, and the figure is almost lost behind the lenticular pog and viewmaster reel and the myriad of stickers.   The figure is posed in a rather odd way in the bubble, but that's only because of  its anatomy, or to be more precise, its wings.  One thing to note is that if this was a Mattel figure, the limbs would be severely warped.  Thankfull, this toy isn't made by Mattel. 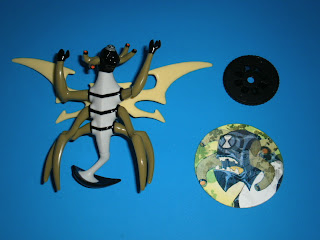 The lenticular pog shows three images of Ben as he transforms into Stinkfly, and has some detail about the character on the back.  I don't have the correct toy to view the Viewmaster reel, so I have no idea what's on it, but I'm going to guess it's scenes from the cartoon.  Besides these two accessories, there are no accessories included with the figure that the figure could actually hold or wear. 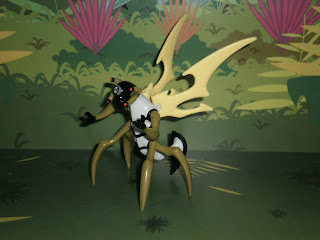 The figure is mostly unpainted, with the parts sculpted from the appropriate coloured plastic.  Like Fourarms and Diamonhead, the Omnitrix is formed from transparent plastic.  The paint, where it exists on the Omnitrix and the torso is good, but there isn't a lot of it.  The lower pair of legs are joined together, and ditto with the middle pair of legs such that although the figure has 10 points of articulation (neck, shoulders, wings and tail besides the 4 legs), it's reduced to 8 independent points of articulation. 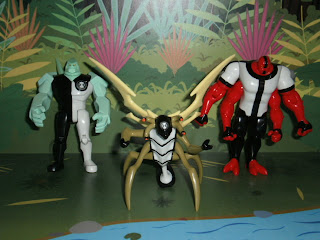 This figure is small and short, when compared with Fourarms or Diamondhead.  I would have though it'd be slightly bigger.  Nevertheless, it's a rather cool looking monster alien insect and it definitely beefs up the rank of my Ben 10 aliens.
Posted by Novelty at 12:16 AM