Here's a look at what's on the shelves this month! 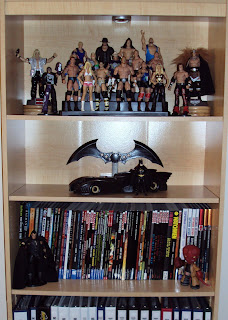 Top Shelf, WWE Elite and Entrance Greats. Middle shelf, the Michael Keaton version of Batman and his classic Batmobile. Holding down the graphic novels are "Ministry of Darkness" Undertaker and HellBoy from the HellBoy II: The Golden Army Mez-Itz.

Batman: The Dark Knight Collection. The batarang in the photo was included with the Collector's Edition of "Batman: Arkham Asylum". 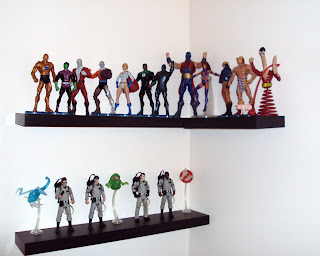 On the wall, top shelf: several B & C-list DCUC figures that usually don't make it to the front row on the main display. Bottom shelf: Finally, the Ghostbusters!

For several of these, it's their first time on display. I usually run out of space when I set up DCUC figures, so not everyone makes the cut. Left to right: Robot Man, Beast Boy, Negative Man, Metamorpho, Power Girl, John Stewart, Iron, Atom Smasher, Starfire, Animal Man, B'Wana Beast and Plastic Man.

After setting these up, I noticed all the DCUC figures had something else in common. All of them feature two fists! No open hands anywhere. Plastic Man being the only exception, because he's displayed with his "racket" hand, but his "regular" left hand is balled into a fist, too.