Hey guys, it's Novelty from Toy a Day, buzzing by to put up this review here, since it's almost insect related.  OK, a spider isn't really an insect, but it's close enough.  The said spider comes with Anton Arcane of Kenner's Swamp Thing line of 1990 and I opened it today as part of Swamp Thing week of Monster October at Toy a Day.  Swarm in to read more! 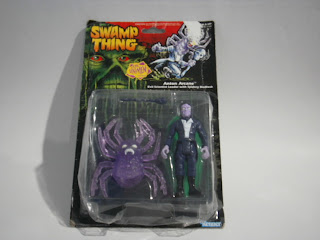 Anton comes on the normal Swamp Thing Evil Un-Men card, with the Swamp Thing logo and a tiny inset Evil Un-Men logo.  There's also some rather interesting artwork on the front of the card, but that's also where the price sticker was placed on there ages, so it's a bit disfigured on my copy.  And my bubble is squashed as well.  I'm glad I don't do MOC stuff. 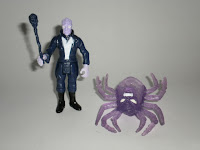 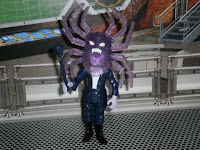 Anton comes with his spider mask and his skull staff.  The figure itself is nothing special - 5 points of articulation at the shoulders, neck and hips, all of them swivel joints, of course.  Most of the body is unpainted, but paint may be found on the torso (the vest is painted) and of course, on the face (the eyes gitd).
The skull staff looks like a matchstick but is very well sculpted.  The only downside is that the whole thing is black and the details of the sculpt is not very visible because of the choice of colour for the staff.  And the spider mask?  It's mounded from a translucent rubbery plastic and fits onto Anton's head rather well.  The mask transforms the bug-eyed figure into something a lot more sinister, thanks to the extra legs.  The sculpting on the mask has a lot of detail, and there's gitd paint for the spider's eyes. 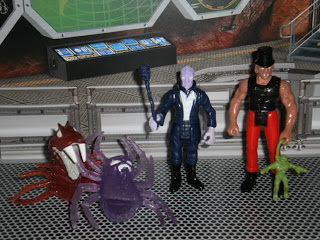 Overall, this is a very interesting toy.  It isn't as fun as Dr. Daemo, but it looks a lot more interesting, what with the jacket and the bug-face and the spider mask.  But will Swamp Thing still pwn him?  Well, that's up to one's imagination and storyline. 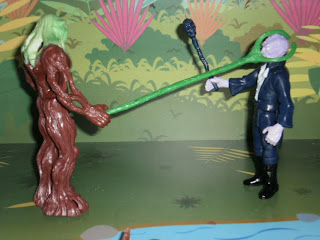