Over on Toy A Day, Novelty's celebrating "Monster October" with reviews of monster-themed action figures and I just had to join in on the fun. Go check out my review of the Wolfman Mez-Itz on TaD now! 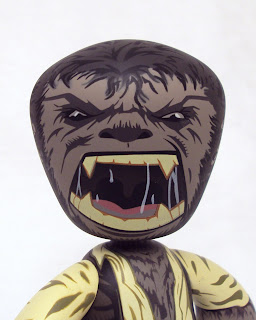 [This review is now available on the Hive. Click below to read. - 3B] 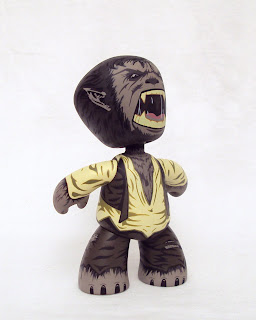 Hello toy fans, 3B from Killer B Hive here again with another review. By now you know it's "Monster October" here on Toy A Day, taking a look at some awesome action figures with some monstrous ties and origins! So because I love to play along, I decided to chime in with a monster review of my own. When I think of scary good ghoulies, I always remember the classic Universal monsters and today I'm going to review one of my favorites: the Wolfman! Now you may notice this is a "designer vinyl" figure, so bare with me as this is the first time I review such a toy. Let's take a look!

The Wolfman here comes from Mezco's Mez-Itz line, tieing in to the recent film remake of the same name starring Benicio Del Toro as the titular character and Sir Anthony Hopkins as a non-titular character. Shamefully, I have yet to watch the entire movie, but still, I know who the Wolfman is, so I'm at least familiar with the character.

Mez-Itz are a line of rotocast vinyl action figures, mostly hollow and smooth, but featuring very stylized graphics creating an illusion of depth and great detail. It seems they've become really popular in recent years considering Hasbro's Mighty Muggs covering Marvel Comics, G.I. Joe and Transformers and brands such as WWE with their own vinyl figurines. I've never been a fan of this type of toy, but last Christmas a friend gave me a HellBoy Mez-Itz and I thought it was really cool, so I've been eager to add another vinyl figure to my collection. 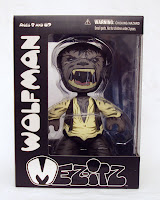 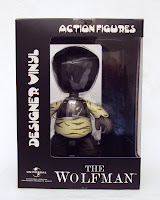 All Mez-Itz come in a plain window box with only a couple of movie (or other media) logos related to the toy inside printed on the box. As you can see "The Wolfman" logos appear on the side and back of the box. The package looks pretty much the same regardless of the licensed property, so you get a uniform look across the board. The figure itself is held in a plastic tray, easily removed from the box via the top flap and once you loosen the twist tie around the waist, he's ready to go.

Like I mentioned above, Mez-Itz are pretty much completely smooth, relying on the painted graphics to create unique figures. Some figures like HellBoy (horn stumps and right hand of doom) or Freddy Kruger (clawed glove) feature added pieces specific to the character. The Wolfman does not feature any special add-ons, so he's sleek all around. 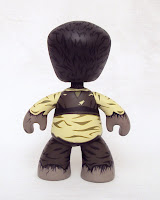 The paint goes a long way in recreating the character on the blank body. The Mez-Itz graphics lend themselves really well to comic book stylings, making live-action characters appear more cartoonish, or "cute", but with a unique take. I didn't really have an interest in the sculpted Wolfman action figures, but this guy looks funny on my shelf. And I don't mean weird-funny, but actual HAHA-funny. 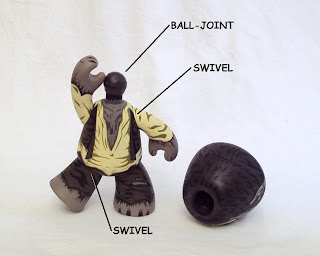 Articulation is minimal on Mez-Itz figures, the wolfman is no different. He features a ball-joing head, he's most "expressive" point. Everything else is a swivel. Note that the legs just rotate in place and cannot be moved into a sitting position. The slight curve of the legs make it appear that they are going outward, splits-style when you turn them. 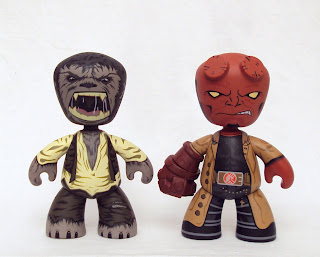 The only other Mez-Itz figure I own is the HellBoy figure pictured above. I wouldn't say that I'd switch to only collecting "designer vinyl" figures, but I can see myself buying more of them, depending on the license. It's nice to have a variety of figures styles on your shelves to spice things up and keep it interesting. I believe you can find most Mez-Itz figures for about $12 at retail when they're brand new. I found Wolfie here at my local Toys R Us where he was on clearance for $5.23 (no kidding!). That's less than half his usual price and since I already had HB, I wanted to add another bulb-headed vinyl figure to my collection. The Wolfman was a perfect fit! If you're thinking of checking out these popular little figures, I recommend looking for this guy as you can find him cheap and he's a great example of what Mezco can produce in the designer vinyl market. 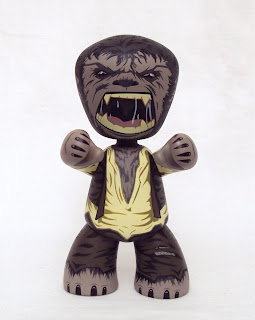