Today we're taking a look at a figure from Mattel's WWE Basic line, Kelly Kelly! The Diva so nice, they named her twice!!! 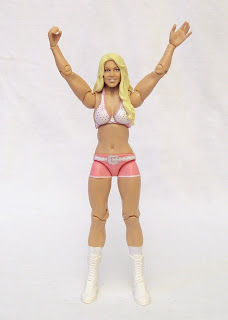 If you follow the blog regularly, you already know that I collect the WWE Elite, Legends and, sometimes, Entrance Greats figures. However, to date, neither of these lines have featured any Divas, or female wrestlers. Divas have only been released in the Basics line (including the Two-packs and PPV series) and feature a different articulation model than the line's male counterparts.

It's a plain blister card package with the standard airbrushed portrait of the Superstar or, in this case, Diva the figure is based on. The back side of the card features photos of the other figures in the wave. Unlike the Elite, Legends and Entrance Greats packages, the Basics card does not feature any biographical information. 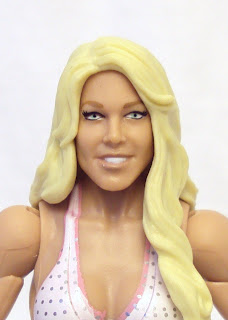 Something was obviously lost in KK's translation into action figure form. I don't know if it's the sculpt or the paint (or lack thereof), but this figure does not resemble the Kelly Kelly. Her face seems to be too wide. She reminds more of Mercedes McNab. The hair is a separate piece of flexidble plastic, molded in a bleached blonde color. There's a lot of detail in the hair sculpt, but it's not easily visible because there's no wash or drybrush to add definition. I'm not surprised as it's not something Mattel does on any of it's WWE figures, but it would have made the hair stand out more.

Another miss is KK's overall size. She's too damn tall and beefy to be Kelly Kelly! This figure is actually taller than Beth Phoenix, the Glamazon. You could argue that Beth is undersized, but KK looks tall even next to male wrestlers, and I don't mean Rey Mysterio. The body is sculpted almost completely smooth except for her top and wrinkles on her buttocks to simulate tight shorts. Her boots are sculpted with great detail and seem to be new pieces, at least they are different than the boots on Mickie James and Beth Phoenix. Her left hand is sculpted completely open, appropriate for waving or bitch-slapping, however her right hand sculpt raises a few questions. It's obviously designed to hold "something", but the way her wrist is bent is quite suspect. I'll just leave it at that.

Kelly's (are we supposed to say it twice everytime?) "costume" is pretty much completely reliant on paint. Her top is actually painted wider than the sculpted seams, so it looks a little off from the front. Also, my figure's app on the bra is a little sloppy on her right breast as you can see in the portrait above. There is some nice painted details on her outfit, especially on her bra and belt, both with silver dots all around. Her socks are also painted on and although they're solid white, the seam more accurate than the painted wrist tape on the Superstars. All the Divas in the Basic lines differ from the Superstars in the articulation department. Although, they feature a few extra points, they aren't quite on par with the Elite/Legends figures, yet more poseable than their male counterparts. Notice the chest pivot, something lacking on Basic Superstars, is restricted to front and back motion, working mainly like the hinged abs on the more expensive figures. While she does have ball-jointed hips like Elite/Legends, they seem too be more restricted by her beefier thigh sculpts and therefore cannot fully sit straight up. Also, the way the upper thigh pieces are cut, KK can't perform a full split like the Melina figure can. Something that is also restricted on Mickie James and Beth Phoenix. Aside from those areas, her articulation is pretty standard and functionaly. Her head is restricted due to the long hair, but can swivel 360 degrees if you manipulate her long locks over the shoulders. 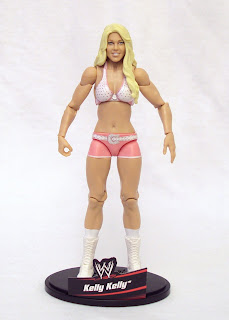 Like all WWE figures, KK includes a WWE logo display base and little cardboard name tag that fits into a slot on the base. Like all Basic figures she does not have any real accessories or entrance attire. At approximately $10, you may consider her a bit expensive since you're only getting a figure, but it's a nicely detailed (albeit, somewhat inaccurate) figure. Mattel's WWE Divas feature some of the nicest female figures around anywhere (they blow DCUC & ML out of the water), and like Wes pointed out in his review of Melina over on Articulated Discussion, they fit in great with other lines requiring big, strong women. I'd prefer to buy these at the $7-8 range, and would definitely take advantage of any sales like TRU's frequent "BOGO 1/2 off" deals. If you're looking for a great Kelly Kelly figure for your collection, you may have to wait a bit longer until they create a better head sculpt and a smaller body. But if you want a tall, muscular blonde woman on your action figure shelf, this is THE figure.

3B's Opinion: Skip It (Unless your He-Man figure needs a new girlfriend!) 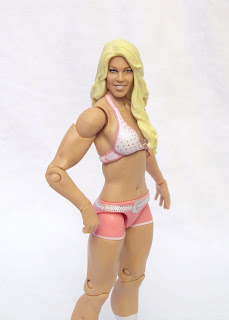