"WEEEELLLL! Well, it's the Big Show!"

Originally I wanted to have a "Monster Week" leading up to Halloween on Sunday, alá Toy A Day's "Monster October", but that plan crumbled due to several set-backs. However, I still wanted to knockout a couple of "monster"-related reviews, and today's fits into that category, albeit loosely. Now, you may say "3B, the Big Show's not a monster." and to that I will reply, "Oh, yes, he is! He's a monster of a man at well over 7 feet tall! That qualifies as a monster to me. Now sit back and read the review or Show will eat your kids!" 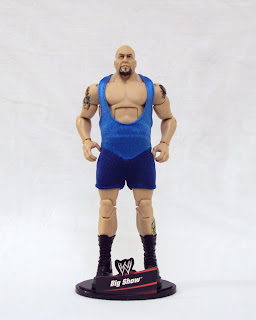 First off, the Big Show has only one accessory (not counting the standard issue name tag and display base): his cloth singlet. Yes, you read that right, CLOTH SINGLET. Big Show fits into the action figure category, but also plays well with Mattel's more popular Barbie franchise. His tights are made of a shiny blue cloth and are stretchy enough to slip on and off with minimal fuss. Yes! You read that right, you can undress Big Show and compare genitalia. Just kidding, he's not complete naked underneath (bummer?). More on that in a moment. 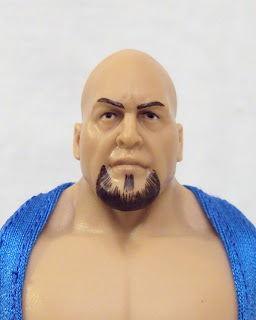 Big Show's sculpted with a bland expression on his face... actually, he seems a bit annoyed and he's looking up at the arena's rafters. I say that because the rafters are the only things Show would have to look up to see. I much prefer the expression the Basic series 6 BS received. It's essentially from the same time period, but he's gritting his teeth and looks all sorts of pissed off! 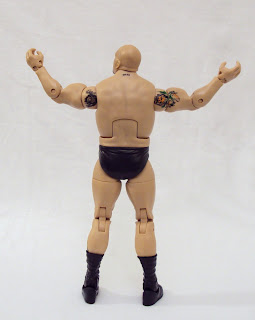 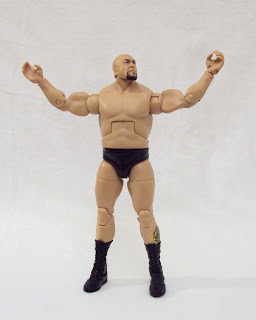 Once you slip Show's tights off, you see a great representation of a classic professional wrestler (and possibly a candidate for next year's "Foxy Men's Week"?). He's only sporting a pair of wrestling shorts and a monster-sized gut. Considering Elite 5's Jack Swagger, I wondered why they didn't sculpt Show with his standard black singlet underneath the removable blue one. Then it hit me! Mattel will probably reuse this sculpt for a classic version of Andre the Giant in the Legends line. Oh, Matty, you clever devil! 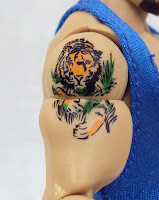 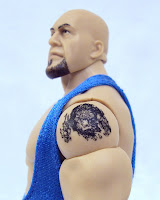 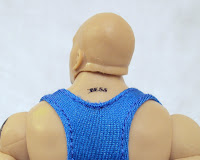 I didn't realize just how many (visible) tattoos the Big Show had. Mattel's design team keeps up the great detail work on all the Superstars' tats and Show's no different. The line work is sharp and clean and the colors lined up well on my figure. I'm guessing he likes big cats, he has a tiger on his right shoulder and a black & white lion on his left shoulder. "Bess" is tattooed on his back, in a very plain fashion. It's not Mattel's fault, that's what the Show has on his back. 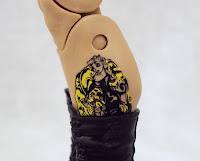 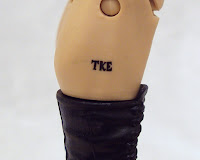 The leg tattoos are a bit more interesting. On his left calf is what I can only describe as a "cat-woman" caressing a tiger, possibly sabre-toothed. on his right calf the initials "TKE" appear without any flare. TKE of course stands for "Taint Kicker Extraordinaire" as that is one of Big Shows signature moves in the squared circle or back alleys of Tampa. I didn't even have to research that on Wikipedia, either! [These comments are strictly false. - 3B] 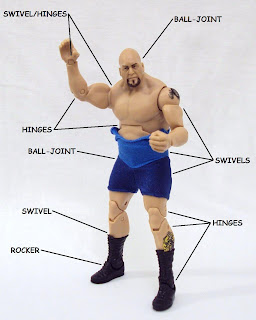 Big Show features the standard articulation model for WWE Elite/Legends and move pretty well inspite of his bulk. Of course, an extra elbow hinge would make this model damn near perfect, so word out to Mattel on that. 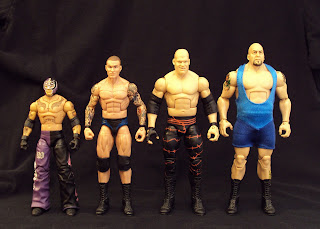 Big Show definitely adds a nice layer to your WWE collection. He's larger than pretty much every other figure, including Kane and the Undertaker, as it should be. I'm glad Mattel was determined to create size differences and realize "Superstar Scale" in all their WWE lines. While Big Show is a bit light in the accessory department, the singlet is a cool touch, adding a nice dynamic to your WWE display. I'm also glad it's this blue singlet from (I believe) his days under the ECW brand of WWE. I'm pretty sure I've mentioned how tired I am of getting so many figures in black tights. However, there is a certain value to having a larger figure at the same price you pay for "standard" figures. It's kind of like buying Juggernaut in the Marvel Universe line or Iron Monger from Iron Man 2. You can't go wrong with a big guy! 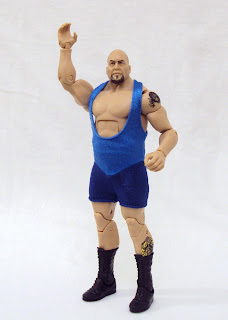