I wanted to save this review for St. Patrick's Day, but by then he may have another Elite figure out. So pucker up and give him a kiss, he's Irish! 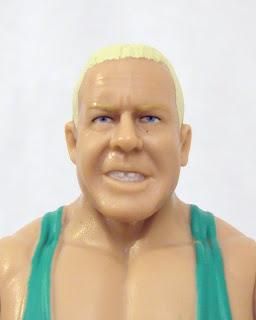 Fit Finlay, as he was known in WCW, hails from the land of leprechauns and potted gold. Hell, Finlay even has his own leprechaun! His kayfabe son on WWE programming, Hornswoggle! The two were packaged together in the first series of Basic two-packs. Unfortunately, the Elite figure does not include Finlay's well-tailored, magical companion, but that doesn't stop it from being a cool figure with a couple of cool accessories. This attire comes straight from his appearance at the "25th Anniversary of WrestleMania" (which was actually WM25. WrestleMania 26 would be the 25th anniversary, but whatever).

Finlay's sculpted with excellent detail, however the face doesn't quite capture his likeness. Maybe it's the clenched teeth or the wider nose, I can't really tell. He does get mostly new pieces since his singlet is sculpted on instead of just painted. As usual, the knee pads are separate pieces and can be removed fairly easily if you so desire. 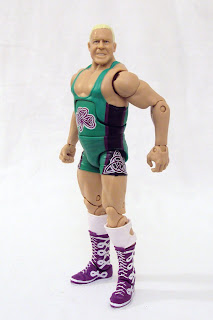 You may notice the pads on my figure are sitting below his knees. While he is wearing them correctly out of the package, I slid them down because that's how he actually wears them when he wrestles, in essence making them shin guards. I think Ric Flair does that also, maybe it's an "old school" thing.

The really impressive work on this figure comes in the form of his paint. He features intricate Celtic symbols all over his costume and most of the applications are clean. There are a couple of missed spots along the seam of his tights, especially on his chest, something I've seen on a lot of these in stores. The patterns continue over his boots, which like the shamrock on his abdomen and the knots on his thighs, are an outlandish purple color, really standing out amongst the usual "SCSA" black tights and boots so many wrestlers sport today. 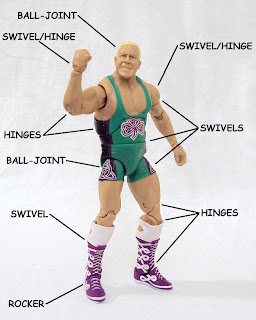 All the movement on Finlay is what we've come to expect for the Elite and Legends lines and works well. The diagram above points everything out if you're wondering what those areas are.

Oh, yeah... WRESTLING FIGURES NEED DOUBLE-HINGED ELBOWS!!! That is all. 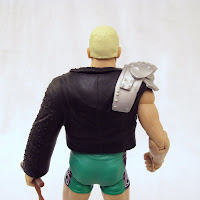 Finlay receives two accessories, the first being this "Mad Max"-inspired jacket he wore during his entrance at WM25's Money-in-the-Bank match. It's molded in pliable black plastic and features silver highlights, mimicking metal armor plating on the right shoulder and details like studs and zippers. The only problem with the jacket is the material chosen to mold it with. Like the Elite Undertaker's coat, the jacket is very stiff and completely immobilizes his left arm. But it does look cool, although makes for a bizarre combination with his green/purple/white outfit. 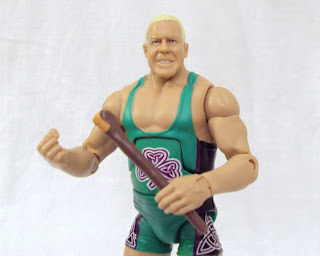 Finlay's second accessory is his trademark shillelagh, which he often uses as a weapon. He IS a professional wrestler, after all. It's molded in a reddish-brown color and has a smear of yellow/orange paint on the knob end. A strap protudes from the opposite end, but is not flexible, so it can look a bit weird in certain poses and doesn't add much to the accessory. At the end of the day, a shillelagh is basically just a club, so there's only so much you can do with it, but clubbing people is a pretty great activity. Finlay also includes the standard name tag and display base, but I'm sure I don't have to go into details about that.

Finlay got a pretty good deal here. He had one of his more intricate costumes immortalized in plastic and this is probably as close as we'll ever get to an "Entrance Greats" Finlay (if anyone actually wanted one). Plus, he has the Elite-level articulation, so musical display base be damned, this figure is good enough! Minor paint issues aside, Mattel did justice to the Belfast Bruiser and if you're a fan of Finlay, or want to spice up your WWE display with some nice, loud colors, he'll make a great addition to your collection. 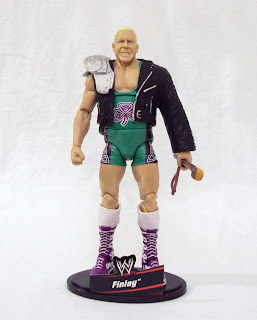