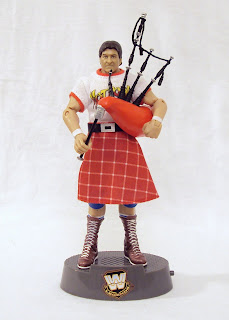 Piper comes to us in the WWE Entrance Greats line from Mattel, a line of action figures featuring authentic entrance attire recreating the most memorable costumes worn by beloved WWE Superstars. "Hot Rod" comes with his trademark t-shirt and quilt.

His clothing is made up of three separate pieces: t-shirt, quilt and belt. All containing small velcro strips around the back to secure each piece. Everthing is easily removebale and likewise easy to put back on.

Beneath all the clothing is a standard "Basic" style figure. The likeness to Piper is very good like many of the Mattel's WWE figures. It seems to me that his hair is a bit short compared to the image on the back of the package. It's not inaccurate to Piper because the length of his hair changed throughout his career, it just doesn't match up with the photo. Roddy features his trademark blue tights and knee pads and his maroon boots.

The little paint on the figure itself is excellent, mainly reserved for his tights and boots. The knee pads are separate, removeable pieces, but the blue they were molded in matches the blue on his tights exquisitely. Mattel did a great job on the boots, too! You can clearly make out the initials "R.P." on each boot and the laces are neatly painted in white along with the soles of the boots. You'll also notice they painted on his striped socks, extending out of his boots. A very small detail that makes all the difference to create an accurate Piper figure. 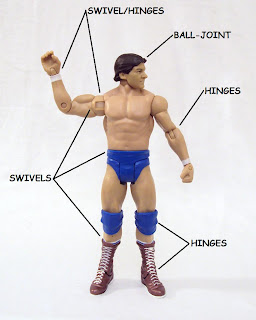 So under all the cool attire, we get a Basic Roddy Piper figure. The usual Basic articulation model is illustrated above. For the cost of these figures I would really like to see the Legends style articulation. I don't really know why they don't already include that with the Entrance Greats. All points work they way they should, though, so no problems with the articulation he does have. 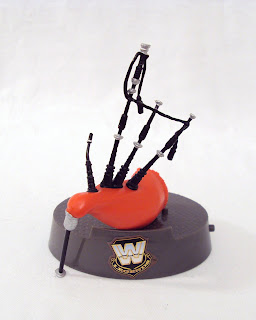 Aside from the clothing, Piper comes packaged with bagpipes. Quite possibly the coolest accessory ever included with any action figure. Yes. It's pretty detailed for it's size, of course, I don't know crap about bagpipes, so I assume it's an accurate sculpt. There's no strap or whatever you would use to carry these, you just pinch the bag under Piper's arm and it stays in place. The other accessory is the standard Entrance Greats musical stand playing a snippet of Piper's entrance theme featuring... yep, you guessed it, bagpipe music! The stand has a switch on the bottom that lets you alternate between the default "demo" mode and an extended version of the music. It's activated by a small button on the right side of the base. Unlike the EG Triple H and Y2J, which feature a decal specific to the appearance they made in the given attire, Piper's stand features a WWE Legends decal. You may notice the one on my figure's base is crooked. Them the breaks, I guess.

I ordered Piper on-line from Toys R Us' website during the week they had EG figures on clearance for $14.99. What's more, they had a "Buy One, Get One Half off" sale on all WWE figures, so he was only $7.49 as I purchased him with WWE Elite Finlay. After shipping and taxes I basically ended paying $15 for him, though, still a great deal compared to the usual $21.99 they go for at TRU and several other retailers. 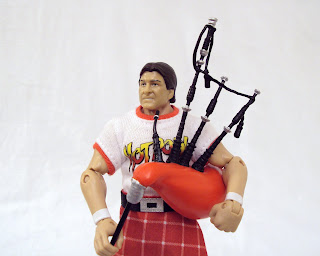 Given the limited articulation, $22 is steep for these figures, although you get some nice threads to dress him up in and a cool accessory. However, if you can manage to hold off, you be better served by waiting for a sale similar to the one I found. If you're a "Rowdy" Roddy Piper fan, you'll be pleased with the figure either way. 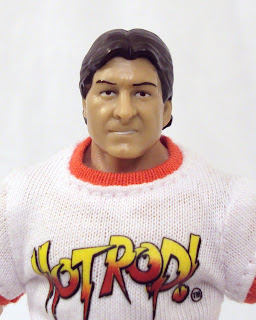