DCUC wave 14 has finally arrived at Walmart, delivering some much anticipated figures and a few obscure additions to the ever-expanding action figure line. Today's review takes a look at one of the lesser-known characters in the wave, the Tyrrazian nightmare that is Tyr! 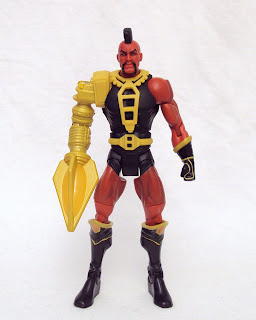 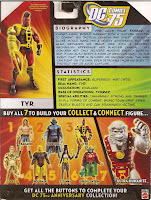 I won't pretend to know diddly about Tyr, I was too young for the "Super Powers" toys/mini-comics and only vaguely remember the related cartoons. But fear not loyal reader! You can take a look at the bio that appears on the back of Tyr's packaging and get up-to-speed on all things "Tyr". Just click on the image to the right. Well, maybe not "all" things because they don't delve into specific details on his origin, but I have a feeling that by the end of this review we'll all know exactly where Tyr comes from. 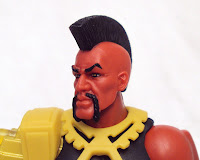 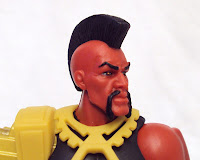 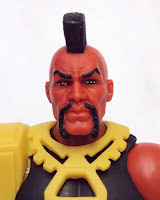 Tyr has a face sculpt that reminds me of retired NFL player and actor, Bubba Smith. You may remember him best as Moses Hightower from the "Police Academy" movies. Not a bad look for Tyr, because Bubba could put on a mean face excellently without having to alter his normal facial expression much. You'll also notice Tyr's choice of hairstyles is the ever popular Mohawk. There are only a few people that can pull that look off successfully and I believe Tyr is one of them. The Mohawk also provides a clue into Tyr's murky background, but let's move along.

Tyr is built on the slimmer body, I think it's the same as the Flash's, but may actually be a bit slimmer. The Four Horsemen have added several new parts, aside from the most obvious (the gun arm) to help him standout from the usual space mercenary look (wink). I really like the gloved left hand, it features beautifully sculpted seams, which is something I would love to see on other characters instead of the usual painted shortcuts. The arm cannon features lots of details all around and works well with the separate soft plastic pieces used over the torso. Brand-new knee-high boots finish Tyr off and help him stand out even more on your DCUC shelf.

The paint on Tyr is pretty well done. Apparently there were some Tyrs that ended up with a darker skin tone, but luckily the batch I found only featured the brighter red skin. I will point out that there is a difference in color on my figure's legs. His upper thighs are darker than the lower part just above the knee joint. I can't remember if this was something common to all the figures I saw at Walmart, but I was so in awe of the amount of wave 14 figures they had in stock, I didn't even notice the inconsistency until later at home. 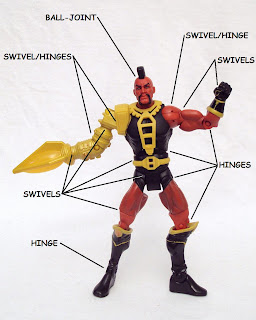 Inspite of having a laser cannon for an arm, Tyr actually adds a couple of articulation points to the standard DCUC model. All points work marvelously and are not hindered by the loose costume pieces on the torso. The single hinge joints at the knees combined with the lack of rocker ankles leave something to be desired when posing Tyr, but it's nothing we aren't already familiar with. It'll be nice to see how the new articulation performs on upcoming waves. 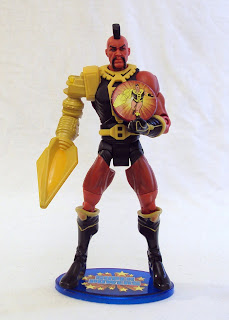 Tyr is the "stand" figure of the wave, meaning he has no "Collect-and-Connect" figure piece. Instead he receives a "Super Powers" stand, which is the typical clear blue DC figure stand with the embossed "DC Universe" logo replaced by the SP stamp. Tyr also includes a 75th Anniversary button featuring his image on the front. It would be nice to get an official collector binder to store these in because right now they're in a plastic bag in my DCUC bin. 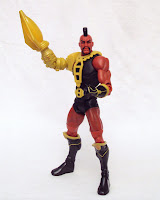 If you read Tyr's bio you know that his arm cannon is sentient and can detach itself to help Tyr. However, the arm on the figure is NOT detachable. Had it been detachable it would have ratcheted Tyr's awesomeness up several points. I mean, who doesn't love an action figure with a mechanical arm that detaches or has swappable parts? That's always a fun feature to have on any toy. 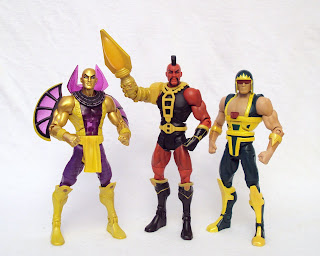 Even though I don't have any prior experience with Tyr or many of the more eccentric Super Powers characters, I'm enjoying him in DCUC along with several of those other weirdos. They're much more bizarre than the usual superhero/villain fair and make a shelf full of costumed characters all the more interesting. Tyr wins several points for his tough guy look and killer arm hardware, which brings me to his origin.

Meet his mommy and daddy... 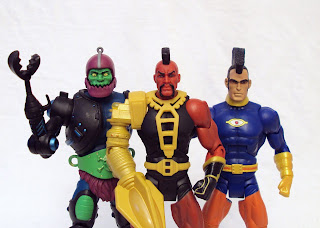