Today marks the release of James Cameron's Avatar Extended Collector's Edition on Blu-Ray and DVD, so I figured it was a great time to review this figure from Mattel's Movie Masters line. You may remember I reviewed Neytiri a couple of months back. Let's take a look at her boyfriend, who helped the evil RDA corporation destroy home tree and later redeemed himself, Jake Sully. 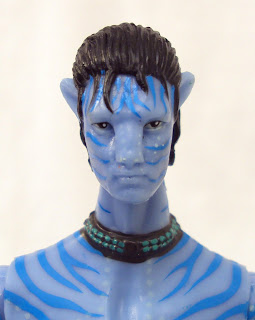 Jake is presented here in his alien body and seems like a pretty good representation of the on-screen character, at a distance. When you look closely, you notice the facial details are a bit soft and the likeness just isn't there. He could pass for any generic, blue-skinned alien in a loin cloth. It's unfortunate that the highest grossing film in the history of the world couldn't receive nicer action figures. It's times like these that make me wish I could afford those super detailed (and highly expensive) Gentle Giant statues. 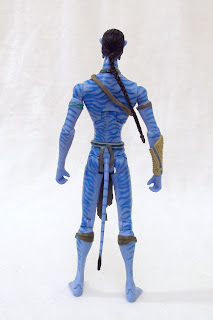 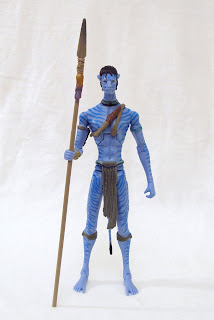 The rest of the figure passes the action figure standard without any major problems. After all, these things are tall, skinny aliens, so it's not to hard to get the body shape correct. There are several nice details sculpted on, like his arm guard and various bands across his appendages. Separate pieces make up his ponytail and ass tail, along with the aforementioned loin cloth. 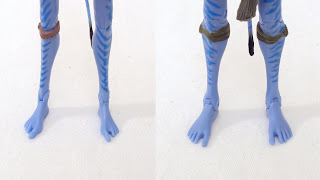 Like I mentioned with Neytiri, the male Na'vi have five fingers on each hand and ten toes, as opposed to the females who only have four digits on each extremity. This is accurate to the film creatures, so someone WAS paying attention to the design at some point. 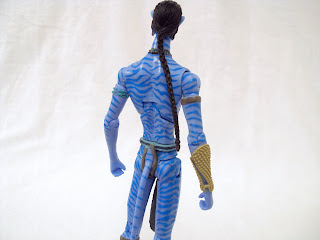 The paint on these figures is pretty sweet and live up to modern action figure standards. It's not at the level of other Mattel lines like DCUC or MotUC, but it's impressive when you consider the tiger-stripe pattern the Na'vi have across their entire body. Other costume details are painted crisply and I didn't notice any real areas of concern on my figure. 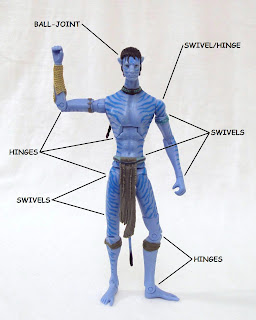 With 23 points or articulation you'd figure this guy's able to move awesomely, but given the agile nature of these creatures and demonstrated in the film, they really could have used double-hinged knees and elbows. It's impossible to achieve many of the flexible poses you see in the movie. Range of motion is fine on the given points, they just need to add a couple more to make this a great figure. 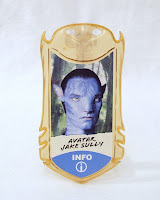 Jake's not doing too bad in the accessory department. He includes a staff and knife. The knife is sheathed on his chest harness, which is removable, so you might count it as another accessory. The knife is accurate to the small blade he uses in the film and fits in his hands perfectly. He's able to hold the staff well and thanks to having well-constructed joints can be posed holding the staff in a threatening manner. An Avatar "iTag" display stand with an image of Jake is also included. I haven't bothered to try the web cam gimmick with the stands and by now, I doubt it's still running anyway.

The main thing holding these figures back is the facial likeness. With the time James Cameron spent working on this film, you'd think there was plenty of access to reference material, probably even 3D scans of the characters, readily available to Mattel. Maybe it was and the execution was just off, but a little more care with the face sculpt would have put these over the top. Wait, I forgot the added articulation! THAT would have put them over the top. Ten years ago, these would have been superior action figures, but by today's standards they fall short of the "Adult Collector" title. They've been out for nearly a year now and while you may not see any Avatar figures in the toy aisles, you may still run into some at your local Kmart, where most of the leftovers are on clearance. I think I paid about $11 or so for this guy at Walmart back in April or May, the last figure I picked up was Col. Quaritch for $8 at Kmart. That was only a month or two ago, so you may want to look around the clearance aisle, if you're still interested in picking these up. 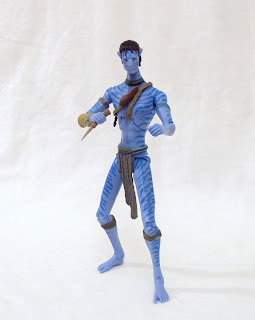 Anyway... anyone wondering what they should buy me for Christmas, take note: I would love to have the Avatar Extended Edition on Blu-Ray. Better yet, if anyone from FOX or James Cameron's camp want to hook me up with a copy, that's cool, too. You wouldn't even have to wrap it!