2010 is coming to a close and I'm tossing my hat into the "Best of" lists going around everywhere. It's been a great year in toys and it's hard to pick out my favorite action figures out of so many released this year. I would estimate that I purchased close to 200 figures in 2010 and that's not even all the figures I WANTED!

For the sake of this list, I'm only considering the figures I did acquire and only the ones released in 2010. So without further a do, here is 3B's list of the 10 best action figures of 2010! 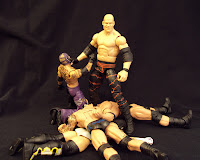 Kicking things off is the Undertaker's pcychotic younger brother, Kane! This figure really came out of nowhere for me. I wasn't a fan of his modern, unmasked look, but the deranged look on his face really made him an awesome addition to Mattel's WWE Elite Collection. 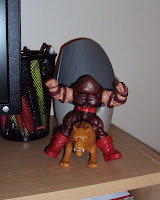 I haven't revieewed this figure, yet, but he did manage to hit me by surprise. If you follow the blog, you probably know I am NOT a fan of 3 3/4" action figures. The Iron Man 2 Comic stuff has managed to suck me in, but aside from that, I avoid the scale. However, certain figures are just too much fun to play with and I was able to find Juggie & Colossus from the Marvel Universe line at a not-so-local Target one Saturday morning. Juggs is one of my favorite X-villains and always equates to a fun toy thanks to his bulky build and the fact that he's unstoppable. He's been holding down my computer desk ever since I found him. "Nothing can stop the Juggernaut!" 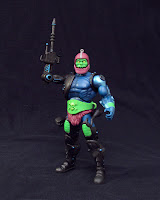 Here's one that made it on to lots of "Top 10" lists around the 'net. I'll admit he's a fairly obvious choice, but still a solid one. Trap Jaw has a little bit of everything a collector or casual toy fan could want in an action figure: he can be two different characters (Trap Jaw or Kronis), plenty of functional accessories, and he's a freaking cybernetic space pirate! Do I really have to go on?!

I only dabble in DC Direct figures once in a while and when I do I'm very choosy about which ones I buy. Since DCUC is my primary DC figure collection, I usually look to add DCD figures that will blend well, or offer a better rendition of the character than Mattel can produce. Nekron is one of those figures. While we'll eventually see him in DCUC, I felt DC Direct's entry won't be easily surpassed, if at all. This guy looks effectively mean and decomposing. I have tons of faith in the Four Horsemen, but I'd prefer they sit this one out. I hope to have him reviewed on the Hive soon, so keep an eye out for that.

Tecnically this is more than one figure, but I have to count them as a whole. This year saw a big boost to the Golden Age JSA's ranks in Mattel's DC Universe Classics thanks to the release of Dr. Mid-Nite, The Spectre, Green Lantern, Hourman and Starman. While considering the figures individually, none really stood out as exceptional, some even underperformed (I'm looking at you Alan Scott!), but taken as a whole and added to the JSA members that were already out: WildCat, Dr. Fate, Captain Marvel and Hawkman, it was great to have a huge portion of the original JSA line-up on display. Ironically, one of the JSA members still missing in DCUC is the so-called "fastest man alive": Jay Garrick! 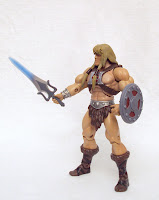 Masters of the Universe Classics have consistently delivered quintessential versions of beloved characters, but the line truly shines when it delivers not-so-classic figures and makes them must-haves thanks to the work done by The Four Horsemen. Although this is technically a reissue of the original King Grayskull from 2008, the new paint scheme and features make it unique enough to warrant collectors buying him again. And thank goodness for fans who missed him the first time around because we were treated to a fantastic addition to He-Man's fantasy universe. 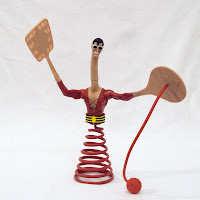 Another surprise figure. I wasn't expecting much out of Plas, but he had great reviews all over the internet and once I had him in hand, I found out what all the fuss was about. Like Trap Jaw, accessorizing is the name of the game. PM was given several appropriate and fun accessories putting him over the top of the usual DCUC fare. A worthy SDCC exclusive indeed!

Another figure I unfortunately never got around to reviewing (although I photographed him pretty much as soon as I found him). War Machine was part of the Walmart-exclusive Iron Man 2 6" Movie Series and showed off what Hasbro is capable of when they put their know-how to it. The detail and articulation on WM surpassed anything we've seen on Hasbro's Marvel Legends previously, causing fanboys to beg Hasbro to bring back the 6" Marvel figures. Here's hoping the relaunch of ML sees this level of awesomeness!

Here's another figure that really shines when he's alongside his teammates, but this version of Peter Venkman is everything a Ghostbusters "Classics" figure SHOULD be, right down to the detachable proton stream. 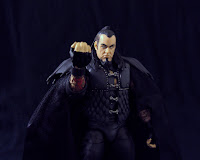 A couple of our FB followers guessed it and this one was the action figure that delivered the most for me in 2010. Mattel unleashed this bad boy at SDCC, making him available for purchase a week later on their website. The WWE design team went to great lengths to deliver a level of detail not previously seen in any of Mattel's WWE lines. New, highly-detailed sculpts for the boots, torso and head, along with great paintwork and a menacing costume accessory made this version of the Undertaker a great display piece and so much fun to play with, he unlocked a universe I didn't know existed! He's my go-to action figure villain and I'm hoping to give him a more prominent role in Killer B Comics come 2011.

And on that note, I'd like to announce the winner of our first ever contest. We had a whopping 4 contestants, but only two had the correct answer. The winner was determined by coin toss and will receive the WWE prize package previously announced.

That's it for 2010, folks. Thanks for reading the blog and following on Facebook. We're hoping 2011 is even bigger and better and to start things off right, we're featuring "11 Toy Wishes for 2011" on New Year's Day. Make sure to come back on January 1st to check out what we hope 2011 will deliver to make it another fantastic year in toys!