Hello loyal readers! I'm happy to announce the first ever Killer B Hive contest! In the spirit of the holidays, I'm giving away a bunch of WWE action figures for your enjoyment OR destruction, you choose!


First, here's what you could win: 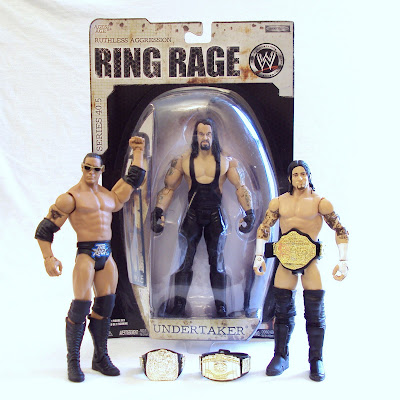 1. The Rock
This is the "Basic"-style figure from Mattel's WWE Entrance Greats line. He will be shipped to you loose with his sunglasses (sorry, but the track suit and musical base are mine!).


Now on to the rules!

1. Guess which of the figures I've reviewed on the Hive is my favorite of 2010. That's out of all the reviews & Stinger Shots editions I've written, so choose wisely.

2. Become a fan of Killer B Hive on Facebook by searching for us on FB or clicking on the FB badge on the lower right side of the website. If you're already a fan, then you're ahead of the competition!

3. Reply to the "Contest" post on the wall with your answer.

You can only enter once, but can provide up to THREE answers! That's 1 post, 3 answers. An entrant will be chosen at random and if that person has the correct answer, they win the package! If they answer incorrectly, we'll choose another entrant randomly and so on, until a winner is found.

The winner will be notified via Facebook and will receive the above mentioned prizes totally free (so don't complain about how crappy they are or what accessories their missing!). Apologies to our foreign readers, but I can only ship within the USA at this time, so don't enter unless you want the prizes shipped to someone within the United States.

The contest begins today, December 10th, 2010 and will run until Christmas Day, December 25th, 2010, ending at midnight. Only consider figures reviewed prior to Dec. 10th for your answer. I've reviewed nearly 50 different figures (see list below) on the Hive, so I'll give you a little hint on which is my favorite of 2010:

The prizes are related to my favorite figure of 2010!

Disclaimer:
The contest is all in good fun and not in any way funded by anyone other than myself, 3B, so don't be a douche and try to sue me if you get sick from eating plastic wrestling figures or any other reason. You should know better than to put action figures in your mouth and/or any other opening on your body.

Feel free to post any questions or comments below. I will respond as quickly as possible. Thanks!
Posted by 3B at 12:05 AM