Just in time for the holidays and serving as a big "F-you" to Ghostbusters fans who had been torturously collecting the original movie team via www.mattycollector.com for over a year, Mattel unleashed this box set of the four 'busters in their dark grey uniforms from Ghostbusters 2. Let's see if this slap in the face turned out to be a great addition to your GB collection. 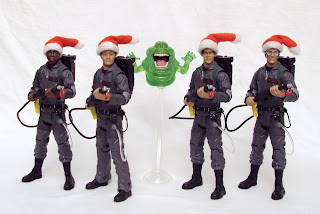 This set began appearing at Toys R Us and it's online store as early as October, effectively giving you the chance to own the entire team in matching, unslimed uniforms a full month before you could do the same with the figures based on the first film. And you'd have all four 'busters in one shot for about half the price they would have cost you on Matty's site. That's kind of maddening for this collector. Let's put that aside for the moment and take a look at the toys themselves. 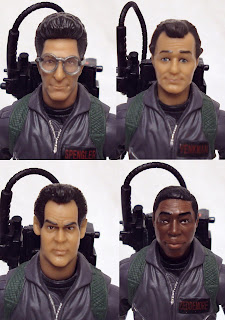 There's a large, expected amount of reuse in this set and if you're okay with that because you're used to seeing it in the single figures, then it shouldn't bother you here. All four 'busters receive the same head sculpts from their single releases (Peter luckily sports the unslimed release's head), which is unfortunate for Winston. Ernie Hudson, who played Winston in both films, lost the mustache and had a squarish haircut for the second film. That is not reflected in his figure. I'll also note that the other three Ghostbusters feature a darker skin tone, as if they tanned for the second movie. I'm not sure if the heads were molded in the darker skin color or if they feature airbrushing, but it looks nice (you'll see the difference in several photos below). 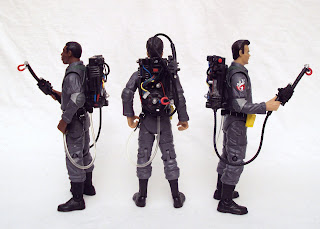 Ray, Winston and Egon feature identical bodies and all three are almost the same as the single releases, except for the new belt piece without the gloves. Peter again sports untucked pant legs, which is the only difference sculpt-wise from the other figures. 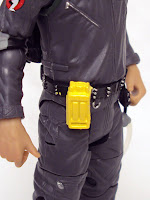 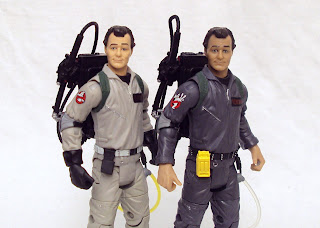 The gloveless belt isn't exactly the same as the one featured on the single release Venkmans. Mattel made a change to the belt by adding a new walkie-talkie sculpt as shown in the photo above. 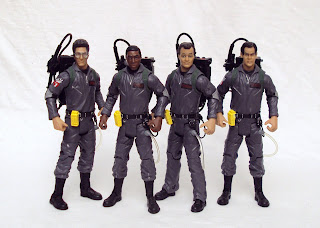 The main draw of the four pack is of course the "GB2" uniforms. The dark grey uniforms were uses sparingly throughout Ghostbusters II and were heavily featured in promotional ads for the film. One poster for the movie even featured the team in these uniforms with Ray & Winston carrying the slime cannons, a combination you do NOT see in the film. Mattel also made sure to add the "GB2" logo on the right arm of each figure. The paint on the proton packs is the same as the first film figures, as it should be, and continues to impress with it's high-level of detail. The walkie-talkie are painted in a bright yellow color, the same as they appeared in the movie. 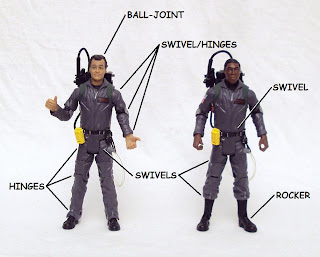 Nothing new in the articulation department since they reuse the same sculpts. Peter has two less points than the other guys because of his untucked pant legs. Everything works as is to be expected with the articulation given, no real complaints here. 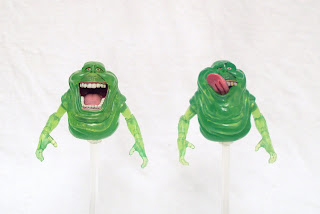 I guess you would count Slimer as an accessory, but come on, it's Slimer! And the fact that this lovable ghoul is in the set makes this a 5 pack! This version first appeared with the SDCC 2009-exclusive Egon, which I did not have, so it's a new Slimer figure to me. 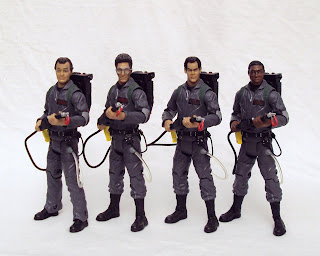 The proton packs are attached to the figures, so that may disqualify them from being considered accessories, but what's a Ghostbuster without a proton pack? Just some guy in a jumpsuit! The proton packs are probably some of the greatest on-screen weapons of all-time! I assume it was the 4H that worked on them and not Mattel's in-house team, because the did a stellar job. If it was Mattel's team, then kudos to you! 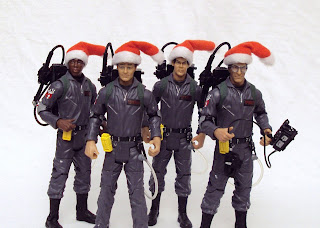 The set includes one ghost trap, the same as the one included with the first Winston figure. It features the working trap doors, but alas, no energy effects to attach. Since this set is based on the one, 3 second scene in GB2 with the guys running around wearing Santa caps, Mattel added little removable caps for each of the figures. The caps are made of cloth and even feature fuzzy cotton stitched in around the base. They fit perfectly on Ray (thanks to his needle-like head) & Winston (thanks to his smaller, rounded head), but are a little tougher to get on Pete and Egon. 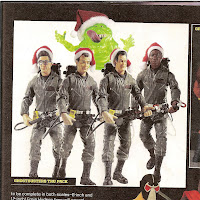 When the set was previewed in ToyFare #157, Slimer was pictured with a Santa hat of his own, but it didn't make the cut for the box set. However, the same cap I used for King Grayskull fits perfectly on Slimer and helps him join in with the boys in grey for a Christmas portrait: 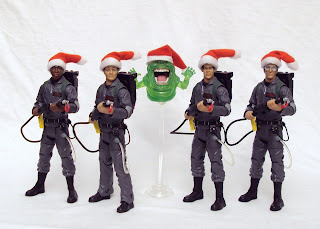 I'll admit that initially I wasn't interested in picking up this set. I was already shelling out nearly $30 for each GB figure and with the unslimed Venkman and Christmas coming up, $60 for the set wasn't in the budget. Thankfully, I found a coupon in the TRU Big Toy Book for %15 off a single item and it worked the same week TRU knocked $10 off the set. I ended up paying $42.50 plus tax. That's damn near twenty dollars off the set and only about $12 more than a single Matty Collector figure! Given the savings, the box set was worth it for me. I've noticed lately the set is being priced as high as $64.99 a several TRUs, which is WAY too high for me. For fans who've skipped out on the single figures, this may still seem like a great deal for all four guys plus Slimer, a ghost trap and the Santa hats. The set is solid and delivers what it promises (minus Slimer's cap) and turned out to be a nice set. If you've waited this long to join in on the GB collecting, you may as well wait until after Christmas and try to find them on sale. They don't seem to be moving too fast at my local TRU stores, even the ones keeping the price at $60.
Posted by 3B at 12:05 PM