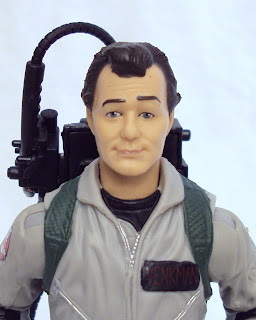 Finally, we have the complete, unslimed, Ghostbusters team from the original film. For some collectors this has been an over year-long wait, but for others (like me) it's been 25+ years in the making. And now after all the frustration and agony of the wait, I can gaze upon my display shelf and see my favorite team of paranormal exterminators together for the first time in plastic with the arrival of Peter Venkman! 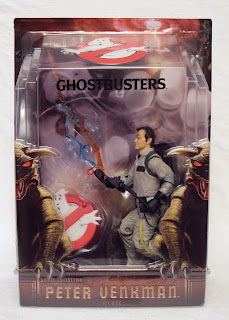 You may remember back in June I was quite excited about obtaining the slimed version of Peter, as it was his first appearance in the line and he was always my favorite Ghostbuster in the films and the animated series. This figure is of course based on the live-action version of Venkman, played marvelously by the brilliant Bill Murray. 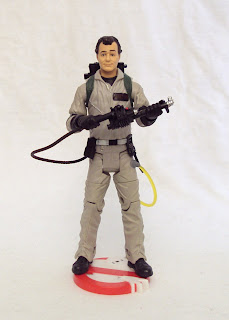 Like the other figures in the line, the facial likeness to the actor is a bit soft and almost like a caricature of Murray. The new Pete figure does not reuse the head from the slimed version. This one has "puffy" hair instead of the ectoplasm-glazed 'do sported by the first figure.

Other than the new head the sculpt is identical to the slimed Venkman. Pete's the only Ghostbuster (so far) to feature gloved hands and forearms, something I'm sure many fans wish was included on all the 'busters. It was odd they didn't give him bare hands and the gloves on the belt like the other guys because then they would at least match. But I think in the long-run this approach will be better. I imagine future versions of the other guys will feature the gloved hands, like the upcoming Winston w/ slime blower.

Most of the paint on Peter is reserved for the proton pack. It's molded in black, but embellished with the usual worn metal look and various colors used for the wires, buttons and lights throughout the pack and wand. His head is molded in a pasty flesh tone with paint used for details like his hair, eyes, eyebrows and lips. The hair line is a bit fuzzy around his head, something I noticed on the 4pk version, too. The painted details on his uniform (shoulder straps, zippers, logos) are solid and clean. I'll also mention that the leg tube (what the hell is that for, anyway?) is molded in a stronger green color than we've seen on some of the other figures. 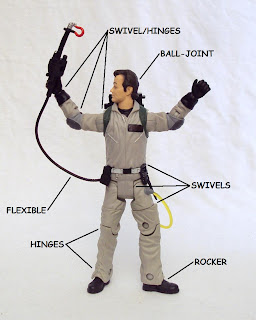 Articulation is the usual Ghostbusters Movie Masters style with the weird elbow joint and no ab crunch. Most points move as intended, hindered only by some of the costume details like the untucked pants, belt accessories, etc. The articulation and shape of the hands allows Venkman to hold the proton wand in the trademark GB fashion. The lack of an ab hinge keeps the figure from achieving some of the more dynamic poses, but then again, it's the Ghostbusters and they aren't known for Spider-man-level flexibility. 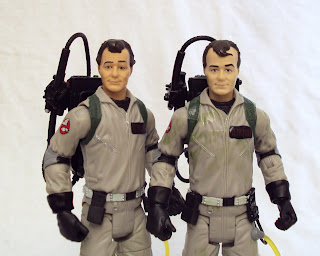 Having the clean Peter kind of makes the slimed one obsolete. But I'm sure we can find some uses for him. You may notice there isn't any slime on his forearms and hands... 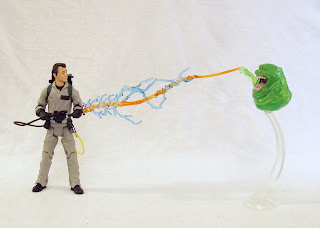 Peter receives what is possibly the most sought-after accessory in the Ghostbusters line: a proton stream! AND it's removable! The stream comes packaged in two parts that snap together at two points a little more than halfway down the main shaft. It attaches to the end of the wand and features a little slot that fits around the red cable at the wand's tip. I was worried it would be a loose fit and fall off easily, but it's actually well-designed and snug enough to stay on. It's cast in translucent orange for the main part of the stream, then features translucent blue lightning effects wrapping around the orange. 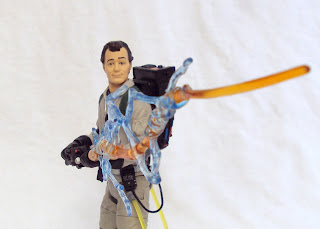 After having it in-hand, you really can't wait to get more streams for the other Ghostbusters. We absolutely NEED a GB weapons pack, Mattel! The other accessory Peter includes is a GB-logo stand for the figure. It's a nice little touch that would have been great if it was included from the beginning with all the figures. Having Peter as the sole figure on a stand looks idiotic on your shelf. The stand itself is molded in white with the red "sash" painted on. It's a bit small and Pete actually ends up standing diagonally across the logo (see third pic from the top). I can't imagine Mattel selling the stands on their own like they do with the DCUC or MotUC displays, so beats me how we'll get more of them. 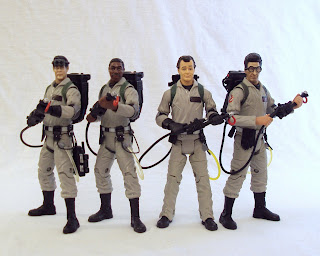 All in all, this is a solid entry in the GB line, and all the reuse, delays, corporate blah blah blah aside, it's well worth it to have all four Ghostbusters standing side-by-side on my shelf. I picked up the GBII 4pk a couple of weeks ago when I spotted it at Toys R Us and experienced a very strong nostalgic feeling for the Ghostbusters that I had not felt while collecting the single figures. I had the same feeling when this new Venkman figure arrived and I had the whole team assembled. I love the Ghostbusters and I learned that while Venkman was and still is my favorite, the team equals something greater than the sum of the individuals. Good job, Mattel.

Oh, and take a closer look at Ray because I found a great use for slimed Venkman's arms... 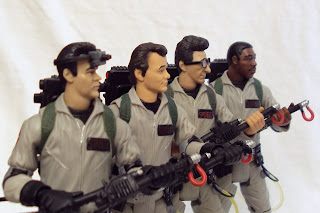