Back in October I posted an update about a recent trip to Tate's Comics in Sunrise, FL. There I managed to haul several action figures that I wanted and this Amazo was one of them. Let's find out what he's about and how he meshes with my preferred DC figure line, DC Universe Classics! 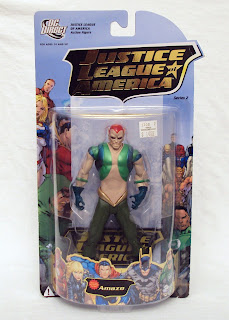 Amazo
Justice League of America Series 2
DC Direct/ 7" Scale
Approx $18.00
I was never a fan of Amazo, I think he looks ridiculous considering he's an android. Why the hell does he have elf ears? What's up with his classic, exposed nipple outfit? And green horizontal stripes? Seriously?! Anyway, I wasn't a big fan of the animated JLU version either, but thought it was an overall better interpretation of the character. Plus, they addressed him as "Dr. Ivo's Android", which had a much more ominous connotation than "Amazo." That's one of the main reasons I skipped out on the DCUC wave 5 version. I hate that costume. HATE it! I had no chance of finding the figure at Walmart as part of the first release, but the fact I already had w5 Riddler, kept me from ordering the whole wave when it was eventually re-released on MattyCollector.com. I still felt that he was a must have character in the DCU, especially being one of the few JLU foes I can easily recognize, so I decided on grabbing this DC Direct version.

This version if taken from Brad Meltzer's relaunched "Justice League of America" comic and features a blend of "classic" and "modern" Amazo. He's still sporting green and the elf ears, but the costume was redesigned to include gloves and covered nipples. Also, it does a lot more to make him look alien, he could fit in as a classic Star Trek villain. I don't know what that has to do with the JLoA, but it works better for me than the circus performer Amazo of the past. DC Direct is known for their phenomenal sculpts (usually coming at the expense of limited articulation) and they don't disappoint here. I have not read the run this figure is based on, so I don't know if the scars on Amazo's face are caused by battle or decay. It's effectively creepy and helps make the android all the more threatening. His head includes a separate transparent red piece glued to the top to recreate his cap. It was interesting to learn that the promo figure features a painted cap instead of the separate piece. I like the transparent look much better. 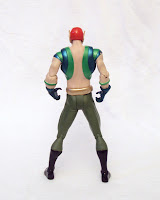 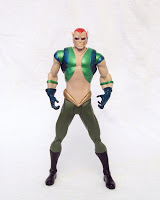 The new costume features lots of nice lines which are all sculpted. Definitely no "buck" reuse going on around here. A downside to many of the DC Direct figures I own is that they are usually sculpted in a certain stance, which along with the minimal articulation, limits the number of poses you can achieve. Amazo received a wide stance that ends up not being a natural look, of course, he's a robot so perhaps that was by design. 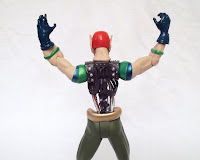 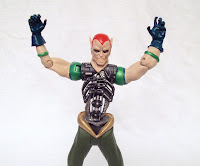 Initially I thought Amazo had some sort of bizarre torso aritculation going on, but I was surprised to learn that his torso opens to reveal his robotic skeleton underneath. It has lots of details and is made up of a few separate pieces. I guess it's a "battle-damage" feature, but may be something story-specific. 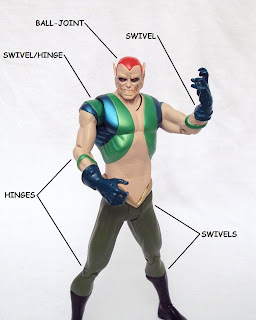 Like I mentioned before, DCD isn't known for awesome articulation and it's really the one category where Mattel's DCUC beats them out. Amazo's limited points are limited in range, except for the ball shoulders which are right up there with the DCUCs. Everything else leaves a lot to desired, but the good news is he doesn't need to have all those points to look nice on your shelf. He'd mostly be a back-shelf villain for me, anyway. 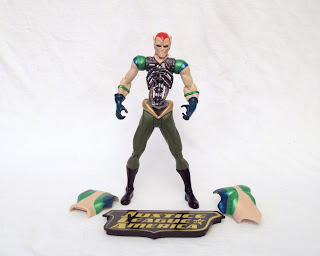 Much like DCUC, DC Direct figures aren't known for including many accessories. Amazo comes with a "JL of A" display stand and that's about it. I wouldn't call his removable torso pieces "accessories", but that may differ for you. 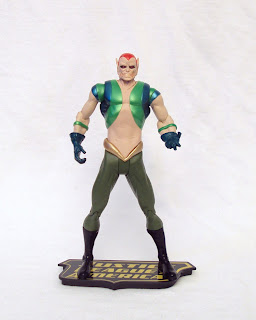 All in all, I'm happy that I have an Amazo figure I can display along with my DCUC figures. While DCD figures are usually much taller than Matte's 6" superheroes, Amazo's not much bigger and I think that works perfectly alongside DCUC figures as Amazo is usually depicted as being larger than the average-sized hero. I much prefer having this "retro sci-fi"-heavy version displayed on my shelf than what Mattel released and if you feel the same about the striped monstrosity, you should be satisfied with this DCD figure. 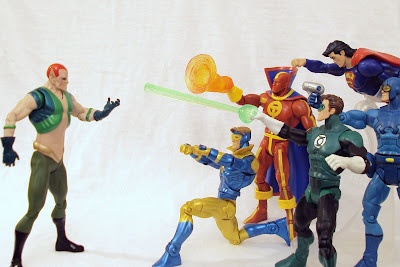