Mattel's been doing a great job with their new WWE figures, but that doesn't mean they always deliver a flawless product. While they focus on small details specific to each wrestler, some things have to be reused in order to keep costs down. Today's edition of "Customs" focuses on the different styles of knee pads used throughout the various WWE lines and how some figures look much better by simply swapping pads with other figures.


The WWE figures I've modified and are featured in this post are: CM Punk, Batista, Ted DiBiase, Triple H, Randy Orton and Stone Cold Steve Austin. I'd like to begin by going over the various types of kneepads used throughout the Elite, Legends, Entrance Greats and Basic figure lines. Putting color variations and size aside, there are three basic styles: 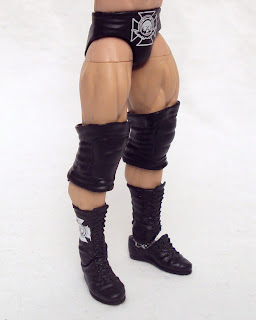 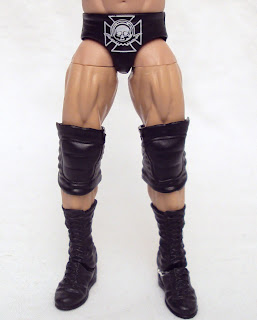 You'll notice these are rather long and are molded to look like they have a thicker, square pad in the center. Examples of figures using these include: Triple H, Jack Swagger, Batista, Ted DiBiase, Mark Henry (oversized) and most wrestlers sporting the "kick pad"-style boots like Chris Jericho, CM Punk and Kofi Kingston. 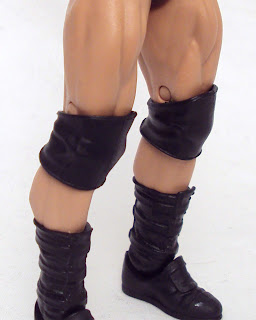 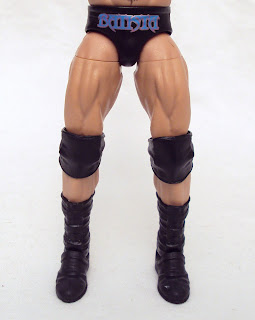 These are about half the size of the Large pads and are much less restrictive. These are included on Randy Orton, MVP, Santino Marella, Dusty Rhodes (oversized) and The Miz (current attire), to name a few. 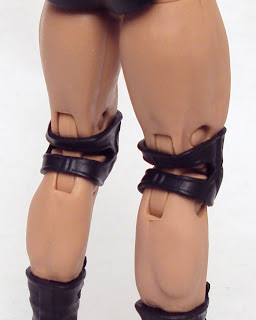 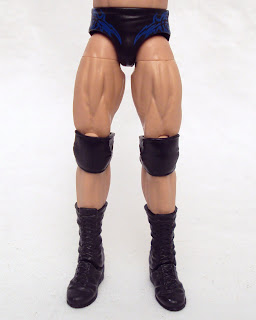 The smallest of the batch, these are a bit shorter than the Medium pads and are opened on the back. You can find them on figures like: Finlay, Stone Cold Steve Austin, The British Bulldog and Jim Duggan.

Our first modification is an easy one. A few figures received the Large pads, but really shouldn't have, like Batista. There was a time he used larger knee pads, but the timeframe his Elite series 2 figure is based on is not it. He should have the Medium sized pads and for the swap I took a pair off of a WrestleMania Heritage Orton figure I picked up during a sale. 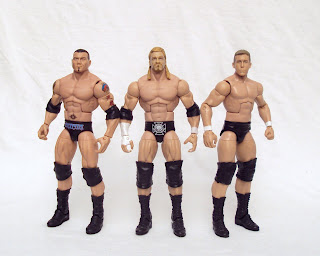 Another figure sporting the Large pads out of the package is Ted DiBiase. While not entirely inaccurate, DiBiase's pads are just a bit shorter than the type Triple H wears, especially on the bottom half. To correct this I simply used an Exacto knife to carve off the lower edge, just under the center pad area. It's probably best you remove the pads before attempting this, as you do not want to cut into your figure. 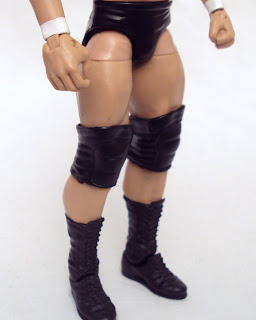 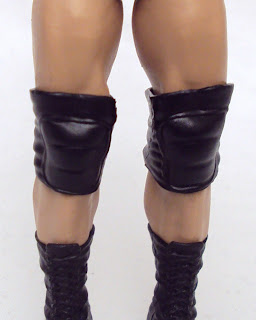 The easiest way to do this is drop your figure into some boiling water for about a minute. Carefully remove him from the pot and lay him on a plate or towel. Using the towel (because he WILL be hot), pull the boots off and you'll be able to remove the pads with minimal fuss. 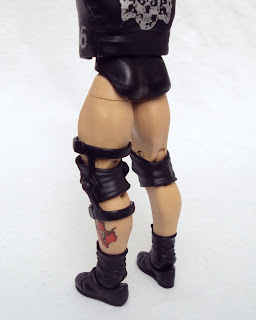 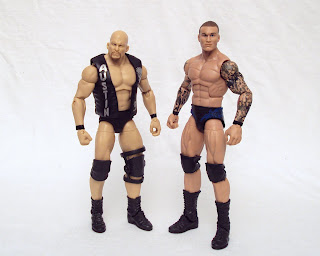 Next up are Stone Cold and Randy Orton. I wasn't happy with the look of the small knee pads for Austin, they seemed inaccurate to his classic appearance. I won't argue that perhaps at one time or another he may have worn the Small type of pad, but the way I remember him is with closed pads all around the knee and seems to be the only way he appears in pictures and video footage I've searched for on the web. Similarly, Orton's use of the Medium pads isn't completely incorrect, but based on his appearance in Smackdown vs. Raw 2010 and on TV, the Small pads with the open back look most accurate. So a simple swap of the knee pads between these two is all you need. 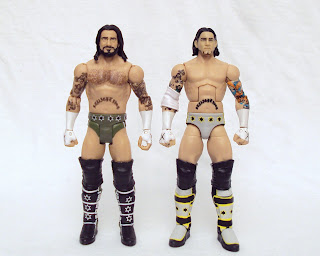 Finally we arrive at CM Punk, one of several WWE Superstars who sport boots with kick pads and are usually delivered to you with the Large pads. On the left is a Basic style Punk from the "Over the Limit" series, while the Punk on the left is from Elite series 1, who I've already customized a bit as seen here. It's a bit odd Mattel chooses to use these pads for grapplers who are usually very agile because the Large pads are the most restrictive, blocking most of the articulation in the knees. Also, manipulating the legs caused the pads to rise, revealing the flesh tone of the leg. This is something you don't see on TV because the wrestlers usually have a longer brace under the pads.

I thought about different ways to approach correcting this. Since I didn't have any spare Medium pads, I decided to go the route of slicing the Large pads like I did with DiBiase. However, this still didn't do much for the pads rising and showing the "skin". To remedy this, I painted the skin on the lower leg piece and the kneecap area using Testors Model Master Flat Black Acryl. Here's a picture of the work in-process: 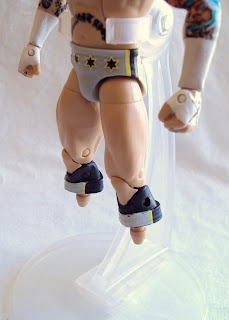 The combination of the modified Large pads and the painted brace underneath yield a much better look than what comes standard on the figure. I'd still like to try it out with the Medium pads, but that would probably require painting a portion of the upper leg also. For now, though, it's not a bad look and I'm much happier with the figure now. 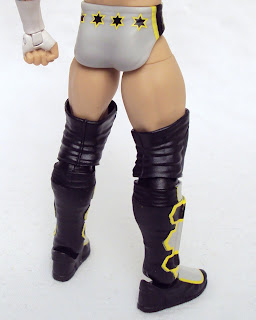 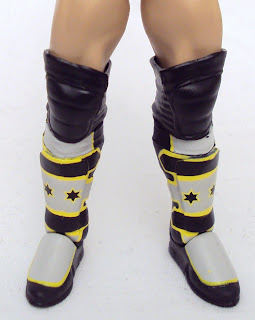 As you can see, these are all pretty simple procedures you can take to add just a pinch more of authenticity and make your WWE collection truly your own. Hope this gives you a few ideas on how to improve your figures and if you have any questions, please feel free to post them in the comments section below, I'm more than happy to answer them.


*** UPDATE - Dec. 28th, 2012 ***
After some consideration I found a more practical and easier way to modify the pads on CM Punk that doesn't require any painting. 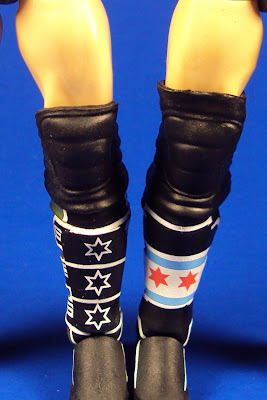 Basically you just trim the top portion of the knee pad. It shortens it just enough to look like Punk's on-screen pads and improves articulation a bit. I still recommend you remove the pad before cutting it. Instead of an Exacto knife, I suggest using some fingernail scissors for an even cut. 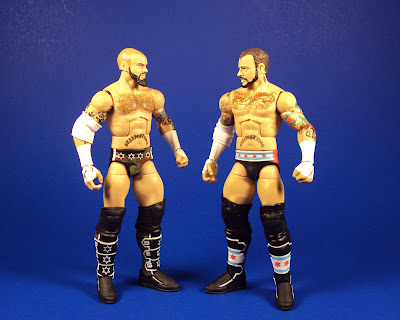 I think it makes the figure look better and is great alternative to buying a figure just to harvest the pads.