Matt Hardy has the distinct honor of being the first (and only) Elite series 6 figure I've purchased. Not just that, he's the only E6 figure I've seen on the pegs! Kind of sad when you consider that up until now, my local Targets and Kmarts have stocked up on WWE Elite figures as soon as they start hitting in other parts of the country. However, Elite 6 and Legends 3 have been MIA, that is until I found Hardy. Let's see how his second entry in the line turned out! 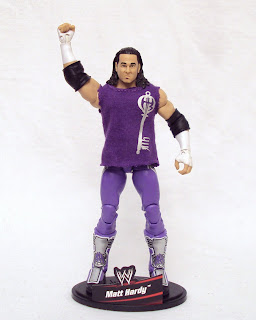 Matt is of course one half of the legendary tag team, the Hardy Boys. Along with his brother, Jeff, Matt innovated the TLC matches (tables, ladders and chairs) and delivered some of the most memorable, and extreme, hardcore matches in WWE history. That was several years ago and more recently, the Hardy Boys were usually against each other before Jeff departed the WWE last year. Afterwards, Matt just kind of lingered in opening card and/or mid-card slots until his eventual release a couple of months back. Thanks to the arduous process of action figure creation, we now receive a new Matt Hardy figure, just in time to lament his departure (ironically series 6 also features Shad and JTG in their "Cryme Tyme" attire). 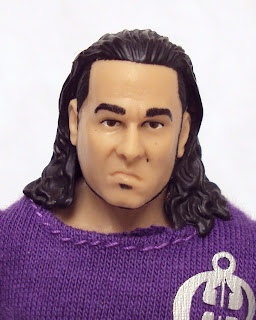 Thanks to Matt Hardy being very much alive, the figure is sculpted using digitially scanned 3D images of the actual wrestler. Now, this may be because of his hair, but Matt here reminds me of Ron Jeremy. It's kind of disturbing to recreate wrestling moves with a figure that looks like an infamous pornstar/B-movie actor. It's not Mattel's fault that Hardy looks like the Hedgehog, though, so I won't hold it against them.

The figure receives the appropriate build for Matt Hardy, not overly toned, but not flabby either. In fact, I think the figure makes Matt look a little better. That's fine with me, it's a toy after all, and muscle tone should be a bit exxaggerated so it's just right for MH. The elbow pads are separate, removable pieces that fit over the arms. Matt also has the kick pad-style boots, but no knee pads are added.

The paint is nice and vibrant and helps this version of Matt stand out on the display as most wrestlers are sporting black attire nowadays. Matt's wrist tape is painted on with solid white paint, it's the easy way to get it done, but it works. The clarity of the tampographed logos is great.

Hardy's tights are adorned with logos all around: the "key"-like designs on each thigh, the "pi" logos on his groin and buttocks and several details on his boots. Everything is printed beautifully and I'd like to make special mention of the painted leg pin holding the knee joint on the upper leg. It's been painted to match the logo on the thigh instead of just having it in a solid color (check out my review of the Road Warriors to see what I mean). The only area that was a bit weak on my figure was the logo over his groin. Some of the paint on the edge of the symbol was chipped out of the box. Other than that, it's nice. 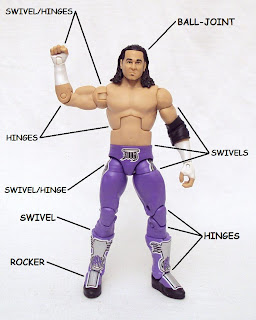 Nothing new in the articulation department. You can see the various points across the figure in the diagram above. All points work well, or at least as well as we've become accustomed to in the line. 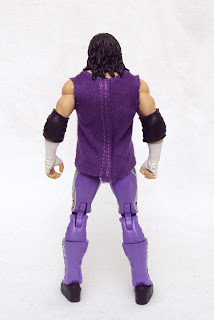 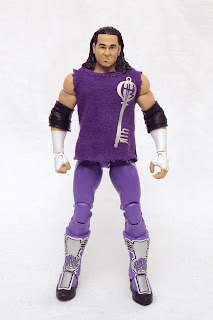 Aside from the boring display stand and cardboard name tag, Matt only includes one accessory which is a sleeveless t-shirt. It's made of cloth with a velcro strip on the back to easily remove/replace the shirt. The color matches up nicely with that of Matt's tights and together help him pop on the shelf. I don't really know what other accessory he should have included, perhaps a steel chair, but it would have been nice to get something else in the package.

In all, I prefer this version of Matt compared to the series 1 figure. The colors being the main draw for me. The figure is solid and holds up to anything we've seen in the Elite series so far. Even with a t-shirt as the sole accessory, he's doing better than some other figures in the line (I'm looking at you Chris "I only have a microphone" Jericho). Hope my local stores bring in more of Elite 6 because I need me a Goldust figure like yesterday! 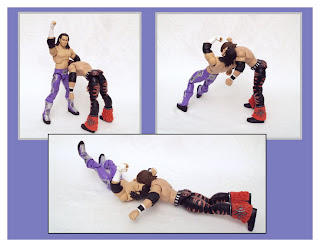