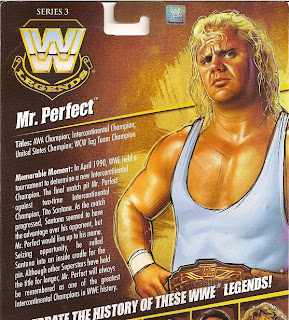 Today I'm reviewing my most anticipated figure from WWE Legends series 3. One of the greatest Intercontinental Champions in WWE history, Curt Hennig, better known to pro-wrestling fans as: Mr. Perfect! 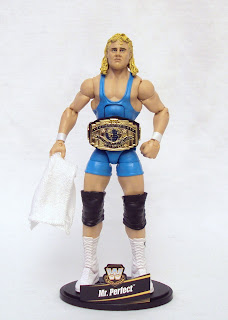 Perfect exuded arrogance and was a consummate "heel", or villainous character. His entrance music was majestic and he strutted to the ring in a "yeah, take a good look" manner that really riled up the crowd. His trademark entrance included Hennig spitting his gum up in the air, then swatting it away, usually into the crowd. And then there was his little behind the back toss of his towel. He'd toss over his back, then catch it in front him, or sometimes toss to his opponent or referee with a cocky "no-look" pass. Like many of the heel wrestlers I became a fan of, the thing that really made me like Mr. Perfect was his signature finishing manuever: the Perfect-plex. It was a bridging Fisherman suplex pin and I thought it was the greatest thing since sliced bread. There was an air of finesse to the move that I didn't recognize in other finishing moves and Mr. Perfect pulled it off beautifully. 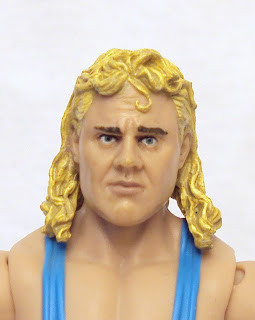 Mr. Perfect was given a smug expression and it works well, but I wouldn't have minded a smiling face on the figure. The perfect (wink) look for a braggart like him. The hair and head are one piece and they did a nice job on the curly 'do. Some of the paint is a bit touch-and-go on the hair. Some of the flesh color breaks through the blond hair color used, making his hair look dirty. It's not too bad from afar, but up close he just looks filthy. My figure also suffers from a dirty face. I don't know how that happened, but his face looks greasy. I'll have to try washing him and hope that clears up his visage a bit.

If you own the "Elite" Jack Swagger, or read my review then you've seen Perfect's body before. It's 100% identical, minus the colors. While it works in the sense that they both wear the same type of singlet and Swagger was sculpted first, Hennig ends up being too tall since Swagger's figure is built to reflect his 6'6" frame. Mr. Perfect was 6 foot 3 inches tall.

The paint on the figure is nicely done. There's no bleed on the singlet between the yellow and blue, nor is there any greenish blending where the two colors meet. The wrist tape is painted solid white and everything else is molded in it's necessary colors.

Mr. Perfect's boots feature the initials "M R P" and I'm sure you can figure out what that means. Those are printed in solid black and appear sharp on each boot. 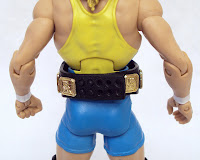 All WWE Legends come packaged with a WWE display stand and a cardboard name tag. I've read that this is being discontinued on the Elite series, but I assume it will affect all other WWE lines. I'm not bothered by it, they were mediocre at best. But Legends 3 & 4 are still packing them, so enjoy 'em while you can. Mr. Perfect's true accessories are his towel (first pic, up top) and his classic Intercontinental title belt. What can really be said about the towel? It's a miniature towel that can be held in Perfect's right hand. It has a single stitch keeping it folded in half. You can easily remove the stitch, but I decided to keep it so the towel will maintain the folded look.

The really nice accessory is the championship belt. While it's not the first action figure-sized belt from Mattel's WWE line (the first 1000 figures in the Basic series included numbered championship belts and the "Entrance Greats" Million Dollar Man came with his custom Million Dollar Championship belt), it is the first recreation of an official WWE Championship. Mattel took several cues from Jakks Pacifics' title belts, but have upped the details and quality. The accessory is constructed similarly to the real titles with a main belt piece with metal plates inserted on the belt. The sculpting on the belt is sharp and you can make out all the writing on it. Thankfully Mattel took time to add coloring to the belt, blue for the globe and black for the lettering fields.

The belt fastens around the back using four pegs on one end that can be inserted in the holes on the other end. The holes mimic the gold buttons on the real belt and allow for the belt to be adjusted to different size grapplers. The only nitpick with this title belt is that it ended up a bit oversized for the figure. Not too the point of being grossly oversized, but just a little too big. Other than that, it's beautiful. 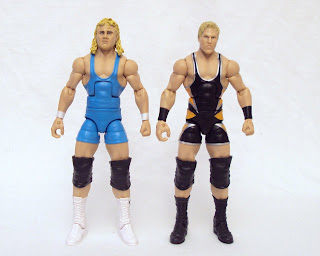 Unfortunately, Curt Hennig belongs to the group of professional wrestlers who died way before their time and he is sorely missed. I looked forward to obtaining this figure because of all the memories I have of seeing Mr. Perfect on WWF programming and a few minor hiccups aside, the figure is just what I wanted. He looks great on the shelf and is a fitting reminder of one of the all-time greats in professional wrestling. 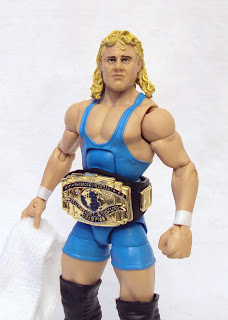