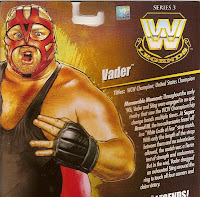 That's right, the man they call "Vader" makes his Mattel WWE debut with this release in the phenomenal WWE Legends line. If you were a fan of WWF and/or WCW programming in the '90s, you'll remember Vader as one of the most dominant forces in professional wrestling at the time. Vader displayed unusual agility for a wrestler of his size, complete with aerial maneuvers!

Mattel did a great job of capturing the big man in a pissed off mood with an open mouth, barking threats at his opponents. As you may have noticed, the mask is a separate, removable piece. His dual Mohawks and goatee have great detail and the paint helps them stand out.

Vader tipped the scales at over 400lbs and the sculpt of the figure goes a long way in delivering a beefy toy. He's on par with Dusty Rhodes, but receives mostly new pieces to recreate his wrestling attire. All the edges are raised and wrinkles are found throughout the figure. Vader also has new hands with the MMA-style gloves he preferred wearing during his wrestling career. The hands are molded in black and the fingers are later painted in the corresponding flesh color. It can chip or be scratched off if your not careful.

For the most part the pieces on the figure are molded in the necessary color, however there is a considerable amount of paint on the figure. Most of it is reserved for the red areas on his outfit. It's a bit weak on one side of his body and black shows through the red. "VADER" is spelled out along the length of each leg, but it's obstructed by his knee pads (which thankfully are removable). I removed the knee pads for a few pictures so you could check out the lettering. 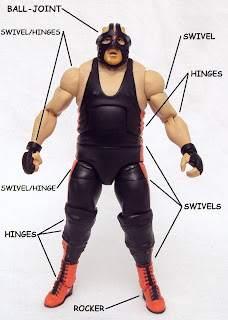 Vader has the standard Elite/Legends-style articulation and everything works as good as it could given his extra bulk. He's almost identical to Dusty in this department given the similar builds. Something we're still waiting on are the dual-hinged elbows, which would facilitate a large amount of signature wrestling moves you could pose the figures in. Metallica's "The Day That Never Comes" suddenly started playing in my head...

With many wrestling figures you couldn't think of a lot of appropriate accessories they should include and I think Vader fits into that category. Thankfully the designers at Mattel thought up a few for Vader. As I mentioned before, big V has a removable mask, but he also includes a spare black mask you could switch the red one with. The masks are identical except for reversed colors. They are excellently detailed, however the paint leaves a lot to be desired. Each is molded in their required color with the small triangle in the center between the eyes painted the opposite color. But that's as far as the mask paint goes.

The holes on the sides of the masks are left in the molded color, ditto for the edges around the straps and the laces in the back. I assume it would be too costly or time-consuming to have painted all those details, but it would have added to the authenticity of the figure. Even more frustrating is having that fantastic painted image of Vader on the package showcasing the details on the mask. I am planning to customize the mask myself and add those necessary touches as soon as I find the time. I'll start with the red mask because it's the one I remember seeing Vader wear the most. 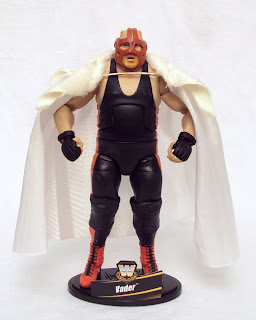 But the accessories don't stop with the masks! Vader includes the requisite WWE display stand and cardboard "Legends" name tag, but also receives a cape. I don't know what the history of the cape is, or when he actually wore this to the ring. It's definitely entrance attire, but apparently not "great" or else he'd be in the Entrance Greats line (wah wah). It's made of white cloth and features a furry piece on the shoulder area. The cape has a stretchy cord to hold the cape over Vader's back. It's a finely crafted accessory, but it doesn't work for me. Like I said, I'm not familiar with his use of this cloak, so without the previous knowledge it seems absurdly out of place on Big Van. Lifelong Vader fans will probably disagree with me on that. However, I'm always glad to see lots of accessories packaged with these figures because they give you options for how to display them. 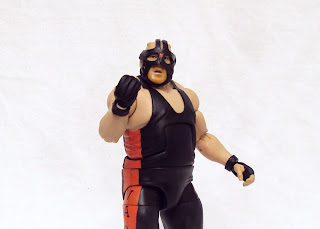 I'll admit I wasn't a huge fan of Vader back in the '90s. To me he was always a WCW guy (even when he came to the WWF) and I hated WCW! However, he's a cool character and big action figures are always fun to play with. He's definitely a nice addition to the line and I was eager to own him when Legends series 3 was announced. As you may know, I love it when these WWE figures blur the line between pro-wrestling and fantasy and I think Vader is one of those characters. You can easily envision him as a maniacal warrior, a blood-thirsty killer-type henchman on par with anything Skeletor may conjure up. But he is missing something and I would like to thank Novelty over at Toy A Day for hosting the contest in which I won this bad boy: 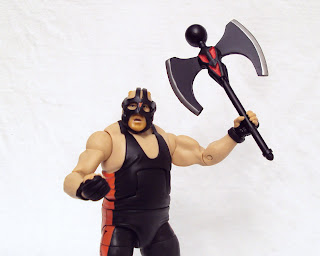 That's the Dread Axe of Darkness by Spy Monkey Creations, a Poe Ghostal.com exclusive and it matches perfectly with Vader. His left hand is perfectly molded to hold this type of weapon. It's a truly a serendipitous union of badassery and I'll probably display him like this from now on. And don't worry, Nov, I'm still going to review the axe! 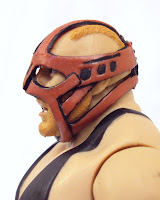 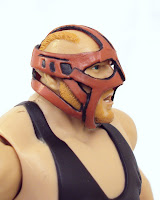 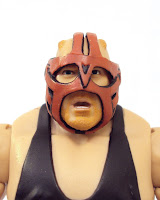 Since writing this review, I have customized Vader's red mask, painting the black lines that detail the mask and adding a new level of authenticity to the figure. Now I just have to do the same for the black mask...
Posted by 3B at 12:05 AM