Today we're taking a look at 2011 and making a few wishes to make sure it's another great toy year. Since we're heading into 2011, I figured I'd make 11 wishes, because coming up with 2,011 would take too long. Nothing here is really out of the blue, but just a few specifics on upcoming figures/lines and how I hope they turn out.

1. Ghostbusters: Winston w/Slime Blower
Thankfully, this one is already coming true. GB2 Winston will feature a new head sculpt with flat top and no mustache. At SDCC 2010, Mattel revealed a prototype which featured the same uniformed torso as the previous GB releases. Any GB fan worth their salt knew this was inaccurate. Matty decided to delay the January release of Winston in order to add the missing chest harness to the sculpt. Now I eagerly await his release and plan on buying two so I can have a "Slime Blower" Ray, too!

2. Ghostbusters: Ray w/Slime Blower
Yep, I know what I just wrote, but I want Ray's figure to be wearing the dark grey uniform like the one in the GB4pk. That way we can recreate the promo posters where the team was in the dark uniforms with Ray & Winston carrying the blowers. It's not like Mattel releases all the figures in matching uniforms at the same time anyway (I'm looking at you "Lab Coat" Ray & "Courtroom" Peter!). I also hope they don't decide to re-release the 4pk next year, simply adding the slime blowers.

3. WWE Elite/Legends/Defining Moments
Double-hinged elbows! That is all.

4. Masters of the Universe Classics: Roboto
Mattel stop blaming the Four Horsemen on this one. Just correct the shoulders and re-release Roboto already. It seems like SOMEONE got it right for the promo ad... 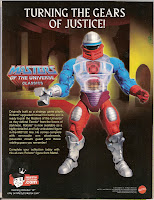 5. Marvel Movie Figures
Hasbro, 3 3/4" figures suck ass. Please make sure to release figures for Thor and Captain America in 6" for serious collectors. You did a great job on the Walmart-exclusive Iron Man 2 6" movie series. Keep it going in 2011! And this time, don't leave out the bad guys!

6. Green Lantern Movie Masters
Make sure to release these in a timely manner and not a year after the movie is released. We don't need 20 Sinestros clogging up the pegs next to Movie Masters Scarecrow. Also, make sure to add accessories, like GL power batteries. Those make sense, not masks too big for the figures and too small for collectors. What the hell was up with those anyway?

7. DC Universe Classics: Swamp Thing
Let's stop beating around the bush. Swamp Thing belongs in DCUC. He's already "back" in the DCU proper, Mattel, so don't make us ask you about it in every "Ask Matty" seession for the next year. I have four letters for you: S-D-C-C.

8. WWE Action Figure-sized Title Belts
We need a way to get these without having to buy sucky wrestlers. I love the upcoming, modern, Intercontinental Championship, but it's packaged with Drew McIntyre. I HATE that guy. And not as in "I hate when he comes out and beats a wrestler I like," no, I really hate him. He's most UN-impressive. We need to see some classic belts, too, like the Attitude-era Heavyweight Championship, the winged-eagle World Championship, the Undisputed Title (I wouldn't mind if this one came with a "Defining Moments" Y2J!) and of course the tag team titles, mercifully without the need to buy the Hart Dynasty. Oh, and of course, Stone Cold Steve Austin's Smoking Skull belt.

9. ThunderCats
Yeah, the license was picked up by Bandai, a company not exactly known for "Adult Collector" action figures. There is hope that with the success of lines like MotUC and DCUC Bandai realizes this is a market they can tap into. And while I really want a line of Thundercats figures for collectors, the true wish is that they'll be compatible with MotUC, because a He-Man/Lion-O team-up would be awesome!

11. Action Figure Prices
2009 saw most mass-retail collector figures jump several dollars in price. 2010's pretty much maintained prices around $15 for the lines I collect the most (DCUC, WWE Elite & Legends), but it seems many retailers are already hiking up prices. TRU's added a dollar to most of these lines recently, with two-packs like DCUC vs MotUC as high as $34.99 on their website. Here's hoping toy companies can pull off another year without raising the retail prices, because I have a feeling 2011 is going to be hell on our wallets...
Posted by 3B at 12:05 AM