The world of professional wrestling may be dominated by the juggernaut that is World Wrestling Entertainment, but they're not the only game in town and that goes for wrestling toys, too! Mattel's WWE lines are showcased often here on the Hive, but I'm not against trying out what other companies have to offer and it's not just TNA wrestling I'm talking about. Today's review takes a look at Playmates' newly released wrestling line: Lucha Libre USA: Masked Warriors.

I'm going to have to plead ignorance on this one. Lucha Libre USA is a wrestling program that airs on MTV2, which I do not have at home. Aside from a few promotional clips on YouTube, I haven't seen any real footage of the show, so I'm not at all familiar with any of the characters. That said, I'm going to judge this figure, the marvelously named "Charly Malice," on it's own merits. 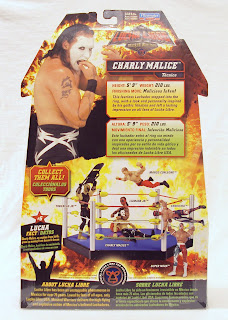 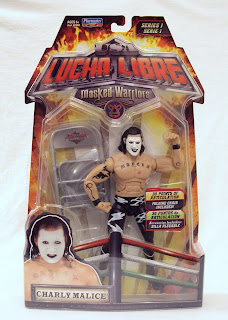 First up is the packaging, which I'm really digging. It prominently showcases the figure with an image of the wrestler on the front. I also like the "ring ropes" pack-in inside the bubble. The back of the card features another picture of Malice and some biographical information along with a group shot of the other figures in the series wrestling in and around a six-sided ring. 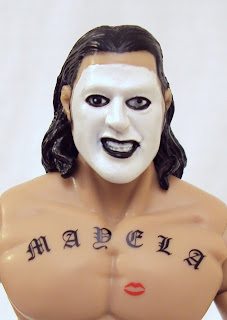 There are six figures in the first series, most sporting traditional luchador masks. However, I picked Charly here because he's clearly deranged and he reminds me of the title character in "The Crow", one of my favorite films. Mr. Malice has a goth look going on, sporting some scary contact lenses to enhance his disturbing appearance.

Charly has an adequately muscled physique for a professional wrestler. The lower body is mostly smooth since he's wearing tights, but there is sculpting on the inside portion of his boots. Malice has several tattoos on display around his body. I can't really make out what his upper arm tats are because they're printed in a thick black ink without much definition. The rosary on his right bicep is printed with much better detail. The letters on his chest are printed cleanly, although I can't seem to make out the word. They seem to spell "MADELA", but I have no idea what that means. There's also a kiss imprinted just below the word on his chest using red paint. I guess old Charly's a ladies man. Isn't that kind of anti-Goth? 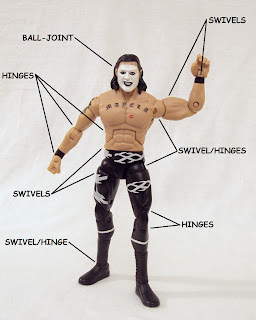 Playmates added sufficient articulation on their wrestling figures. Charly features a ball-joint neck, however the length of his hair restricts a lot of the motion, limiting it to just a swivel with some tilt side-to-side. All other points function well, but like Mattel's figures the arm articulation doesn't do enough to recreate more intricate wrestling holds or poses. Also note the articulation is similar to Jakks' TNA figures, using the same type of wrist articulation. Instead of a combination of a swivel/hinge, the wrist has a hinge with a swivel just above, concealed by the painted-on wrist tape. 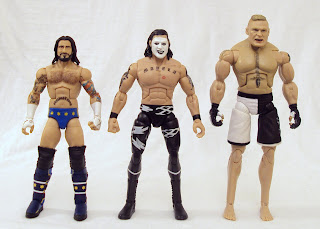 Here's a comparison of Charly with CM Punk from Mattel's Elite Collection and Brock Lesnar from Jakks Pacific's UFC line. Malice is billed at 5'9", making his figure more in-scale with Lesnar. But just like Jakks UFC (and presumably TNA) figures, all the luchadors in the Lucha Libre USA line are basically built using the same body and therefore the same height.

Each figure in the Lucha Libre USA line includes one accessory and Charly was blessed with a folding chair. It's made up of a few parts and can actually be opened and closed; good for sitting or smashing into an opponents face! The chair features the LLUSA logo sticker on the backrest. That way you know what wrestling promotion beating you senseless with arena furniture. 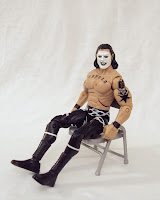 I was kinda excited about having an action figure-sized folding chair because after purchasing nearly 50 Mattel WWE figures, I still don't have much in the way of pro-wrestling weaponry. The folding chair is a timeless piece of wrestling and Malice's accessory is great rendition of it.

I'm happy to see more options on the pegs for wrestling fans even if the TV product isn't as prominent. Lucha Libre USA: Masked Warriors offer a fun wrestling experience, with adequate detailing for collectors, yet plenty of fun for kids. They're priced along the lines of Jakks' UFC and TNA figures, but I think the addition of a weapon accessory pushes them ahead in the value department. On the flipside, they don't have any household names, so they may not appeal to wrestling fans in general. While they'll look out of place with a Mattel WWE collection, I think these Playmates figures will blend right in with your Jakks WWE or TNA figures and add some spice to your display. Pick one up and try 'em out, I think I'll grab one or two more, myself. 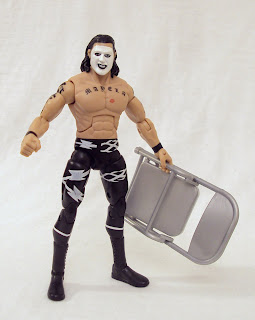