I'm taking a break from wrestling figure reviews today, but there is still plenty of "tag team" action with today's look at the first army builder set in Mattel's Masters of the Universe Classics: the Eternian Palace Guards! 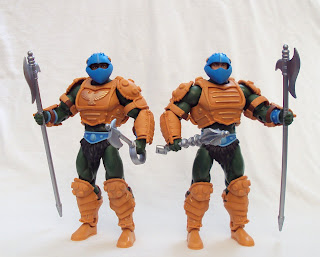 The set features two palace guard bodies loaded with armor and featuring four swappable heads. The armor is modeled after Man-At-Arms' armor with the addition of pieces for the right side of the body and new chest armor that allows for different chest plates a lá Battle Armor He-Man. Each head has an MAA-styled helmet sculpted on, but features a different face.

From left to right, the faces are: black male (possibly Clamp Champ), white male (sculpted with the likeness of MotUC Brand Manager Scott Neitlich), feline warrior, and snake/reptilian warrior. I like the idea of the black male being Clamp Champ and from here on out, he will wear the lieutenant rank and be referred to as Lt. Klamp (I also gave him the full name of Cornelius Klamp). 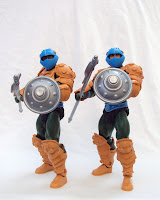 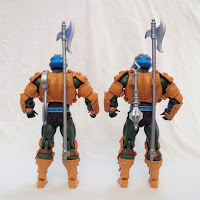 Aside from each figure having 8-piece removable armor, they each have a removable face shield, battle shield and a long battle axe. The package also includes one small axe and a club. Each guard can store two of the weapons on their backs, except the shields. The silver shields don't fit very well over the armor, so I prefer to remove the forearm piece when I display the guards carrying the shields. 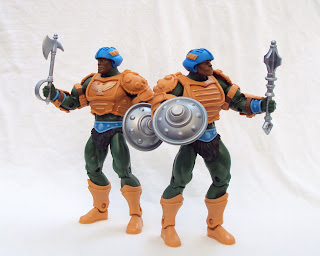 All weapons included with the set are new to the line. The club may look very familiar and should because we've seen it in the line before... kind of. It's a resculpted version of Moss Man's club, which was reissued as a silver weapon in the "Ultimate Battle Ground" weapons pack. This version looks less "earthy" and more "techy" and I assume is the only weapon the guards have which could possibly fire some sort of blast. Doesn't it seem strange that the Palace Guards only have archaic, close-range, weaponry when blaster pistols and rifles are available? That aside, all the weapons look very cool and the long axes even feature some nice airbrushing on the blades. 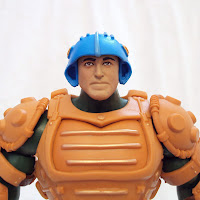 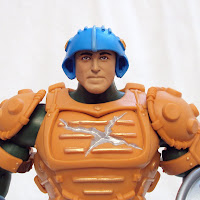 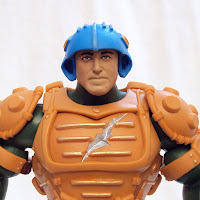 There are basically two types of chest plates in the set: Lieutenant and Private. The Private (Pvt.) comes in three stages of battle-damage: undamaged, one-strike, and, the near-fatal, two-strikes. If you have the previously released Battle Armor He-Man, then you're familiar with how these plates work. The chest armor opens up at the shoulders and sides, held together by tabs. Separating the armor allows you to push the plate out of the inside of the front armor piece. Then you just drop in the plate you want and lock it into place before replacing the chest armor. 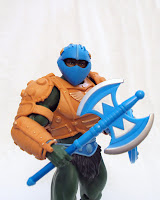 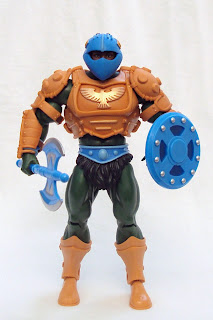 The other type of plate is the lieutenant (Lt.) rank and it is distinguished by an eagle emblem, which by the way is awesome. There's only one of these, so I guess being a Lt. makes you immune to battle damage. I gave Lt. Klamp the blue He-Man weapons from the Ultimate Battle Ground pack and I really like the way they stand-out from the orange armor the same way the helmet does. Plus, he's the Lt., shouldn't he have cooler weapons than the grunts? 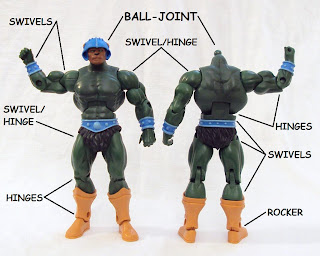 Articulation is standard for the line and everything works as it should. Obviously the armor hinders a lot of the movements, especially the chest armor. Maybe that's why Man-At-Arms only wears armor on one side of his body... 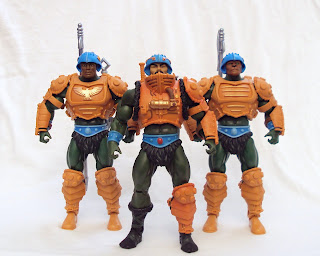 I assume Duncan's rank is somewhere around Captain or General. Or maybe "Man-At-Arms" is his rank? Anyway, I'm sure he leads these guys when they're on the field. Here the guards are fully-armored, buy I actually prefer them without the leg armor. Notice that in the last few pics above I've removed them. While the leg armor does fit over the Keldor boots, they were obviously designed for the fur boots and it seems that the orange boots are armored enough. 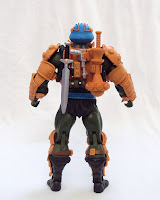 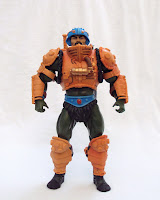 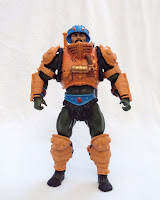 Like many fans, the first thing I did when I opened up the package was promptly place the right arm and leg armor pieces on my MAA figure. As you can see in the picture on the left, the guards' armor is a lighter shade of orange than Duncan's. 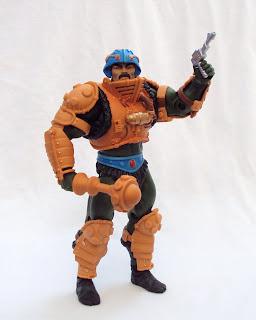 It's cool to have a fully-armored Man-At-Arms, but I think there's a certain charm to him with only half the armor. Kind of a tough guy thing. However, it would be nice if they tossed his missing armor into a future weapons pack. A question I posed to Toy Guru himself some months back, to which he replied with... 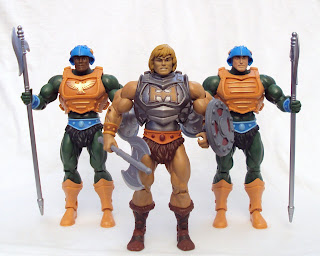 Even without the satellite armor on the guards, they still look great and I like to think this attire seems more appropriate when they're inside the palace. 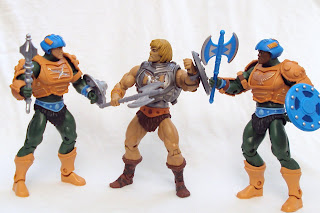 He-Man insures the guards stay in peak condition. They got a good hit on He-Man, but Pvt. Neitlich's taken two solid blows to the chest already. Watch out for that axe, Scott! 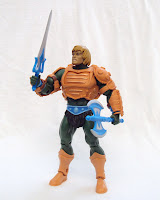 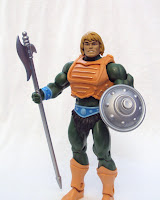 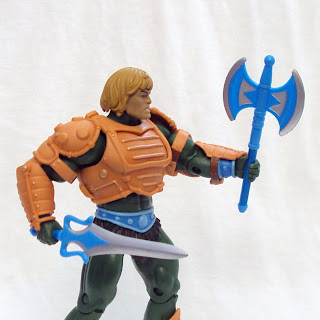 What if Prince Adam became a Palace Guard? What if in an alternate storyline Adam was never a prince? What if he was just an anonymous soldier within the ranks of Eternos' army and was chosen to become He-Man? MAA would of course still know his secret, and being the General (or whatever), would still be able to cover for Pvt. Adam when he disappears. 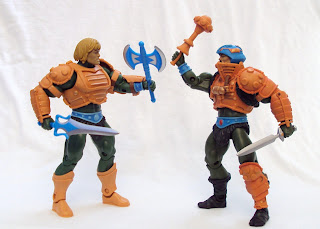 Man-At-Arms would surely test Adam's mettle himself, though. Making sure Adam can protect the palace with or without the power of He. 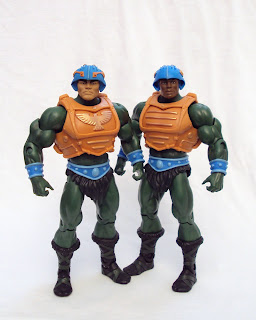 And now a few shots of the past, back before Duncan was Man-At-Arms and Cornelius was a lieutenant. Here we have Lt. Duncan and Pvt. Klamp. Also notice they're sporting the fur/leather boots. Remember, this was many years before Adam was even born. I swapped those boots out from Tri-Klops & MAA. 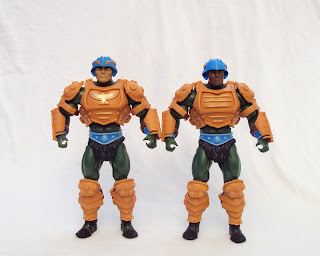 The fur boots give them a much more infantry feel, unlike those snooty Keldor boots. Plus the leg armor fits much better. I really liked this version of the guards, but couldn't leave my MAA and Tri-Klops figures legless. 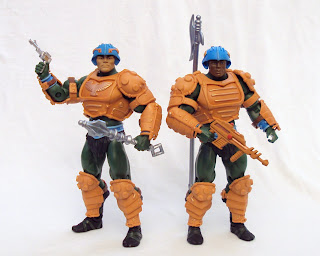 Hey! What do you know? Blasters! 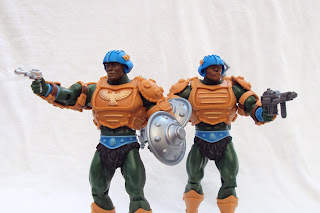 I'll admit initially I wasn't too excited about this set and almost skipped them altogether. But as it turned out, thanks to the whole Vikor debacle, I ordered the guards when they were first available last week and they proved to be a fun set. They have plenty of accessoires giving you lots of options on how to display them. And given the "mix n' match" nature of the line, there are so many possibilities, it's easy to have fun creating your own MotU-verse. I did!
Posted by 3B at 10:00 PM